Capt. Johanna Smoke, second from right, speaks with a local official after helping women register to vote in Zabul province, Afghanistan, in 2013. A new study found that thoughts of female soldiers dying in combat does not diminish public support for war. Kandi Huggins/U.S. Army () 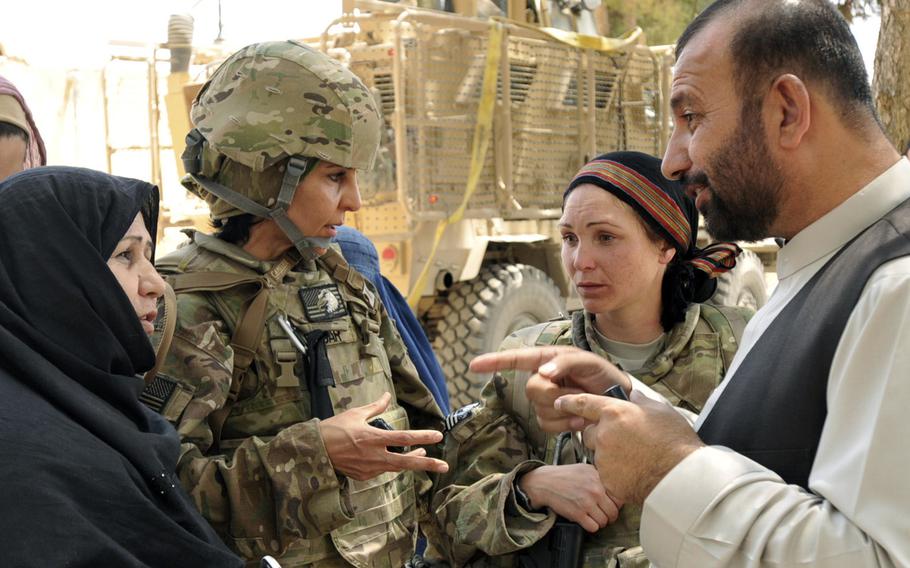 Capt. Johanna Smoke, second from right, speaks with a local official after helping women register to vote in Zabul province, Afghanistan, in 2013. A new study found that thoughts of female soldiers dying in combat does not diminish public support for war. ()

Women’s combat deaths do not erode public support for armed conflicts any more than the deaths of male soldiers, according to a new study.

And although the thought of female combat deaths appears to reinforce women’s views on gender equality, it does not do so among men, said “At War and at Home: The Consequences of U.S. Women Combat Casualties.”

The joint study by Rice University, Harvard University and the University of Nebraska-Lincoln surveyed a nationally representative sample of 1,400 adults and more than 4,000 respondents in follow-up surveys.

“Many of the policy arguments about whether women ought to be allowed to serve in combat rest upon untested empirical claims about the consequences of allowing them to do so,” said the report published in the Journal of Conflict Resolution. “This study brings new evidence to bear on these speculative debates.”

In 2015, the Defense Department ordered that women be allowed in all combat positions despite resistance from some quarters, including the Marine Corps.

Opponents suggested that female casualties would dampen public support for a war and that political leaders “might find their ability to fight and win wars severely diminished,” the study said.

But study author Dara Cohen, a professor at Harvard University, said “we found no evidence of that whatsoever.”

They were then asked to answer questions meant to measure support for such a conflict, including whether it was a mistake.

“In sum … we find an abundance of evidence challenging the idea that women fighting and dying in combat will erode the public’s willingness to mobilize and to support war efforts,” it said.

Respondents were also asked a set of standard questions designed to ascertain their views of women’s roles in public and private life after reading the scenarios.

“Women dying in combat increases support for gender equality, particularly in the public sphere of work and politics, but only among women respondents,” the study found.

“Telling women they can serve in these roles — it becomes somewhat aspirational for women,” Cohen said.

The willingness to fight and die in combat is inextricably linked with what it means to be a full and equal citizen of the state, the study noted, citing the examples of Black soldiers until the early 1950s, and gay, lesbian and bisexual servicemembers until 2010.

But male participants in the study were no more likely to say they thought women made good leaders after reading scenarios in which valorous female troops were killed in action.

Supporters of female combatants have argued that allowing women into combat positions was crucial for their career advancement and that it would spur efforts for full female equality in the military.

From 2001 through July 2020, some 173 female servicemembers had been killed in Iraq, Afghanistan and Syria, according to the Congressional Research Service.