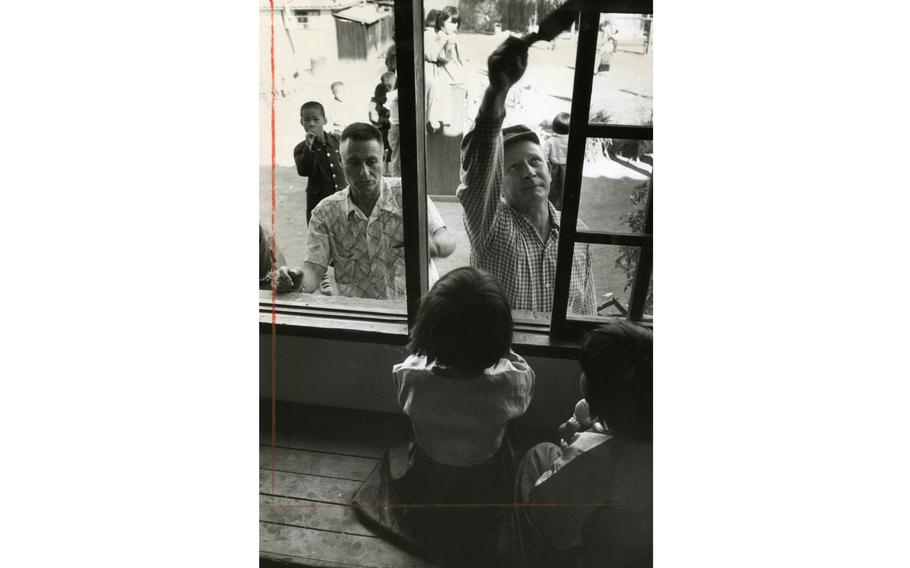 Seoul, South Korea, October 1960: Lt. Col. Fred J. Ruff and Chaplain (Maj.) William H. Briggs paint the window frames of the Sungnam Orphanage in Seoul. Ruff, his wife Mrs. Annie D. Ruff and the men from the 6146th Air Force Advisory Group have been working to build a permanent home for 77 children of the Sungnam Orphanage, located south of the Han River bridge. The building is rapidly taking shape thanks to the twice-weekly visits of the Americans as officers, wives and enlisted men have contributed to the project by hefting brushes and hammers.

Pictured here is a scan of the original 1960 print created by Stars and Stripes Pacific’s photo department to run in the print newspaper. The red marks indicate the crop lines. Only the middle part of the image would appear in the newspaper. As all pre-1964 Stars and Stripes Pacific negatives and slides were unwittingly destroyed by poor temporary storage in 1963, the prints developed from the late 1940s through the early 1960s are the only images left of Stripes’ news photography from those decades. Stars and Stripes’ archives team is scanning these prints to ensure their preservation.