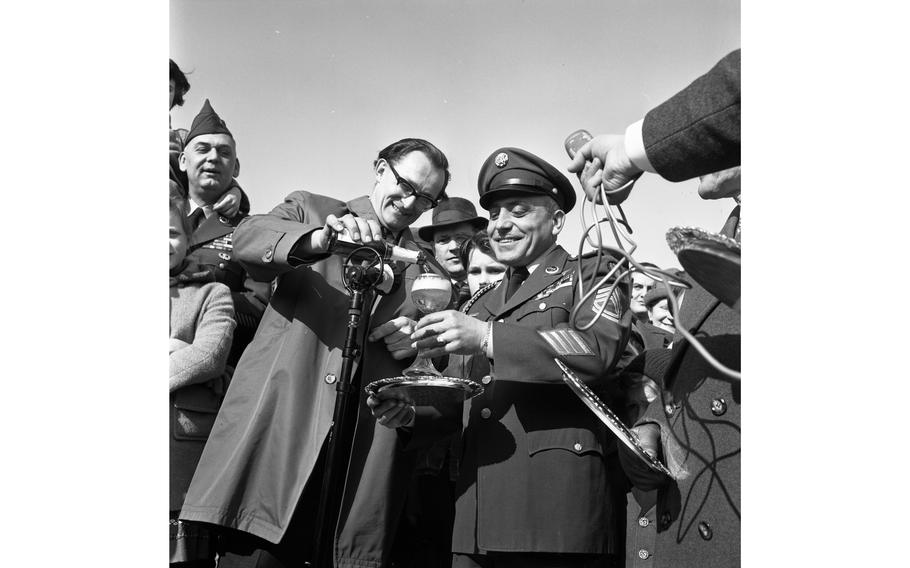 Remagen, Germany, March 7, 1962: Former German army Sgt. Gerhard Rothe (left) pours a drink into the ceremonial cup held by U.S. Army Sgt. 1st Class Joseph A. DeLisio so they can raise a toast at the ceremony commemorating the Allied capture of the Ludendorff railroad bridge at Remagen, Germany, on March 7, 1945. Rothe was among the defenders of the bridge and DeLisio was a member of Combat Command B of the 9th Armored Division, U.S. 1st Army.

After jokes back and forth, Rothe’s voice went serious. “You know, for me it was very bad,” he said about that day. “I was wounded and I was crawling over that bridge. I thought I would be killed.”

“You were thinking the same thing I was thinking,” replied DeLisio. “All I wanted to do was get off that bridge.”

The 17th anniversary of the unplanned advance called by then Gen. Dwight D. Eisenhower a “military windfall,” saw several of the combat soldiers — Americans and Germans — who were there on that faithful day reunite.

Subscribe to Stars and Stripes’ historic newspaper archive and read history! We have digitized our 1948-1999 European and Pacific editions, as well as several of our WWII editions and made them available online through https://starsandstripes.newspaperarchive.com/