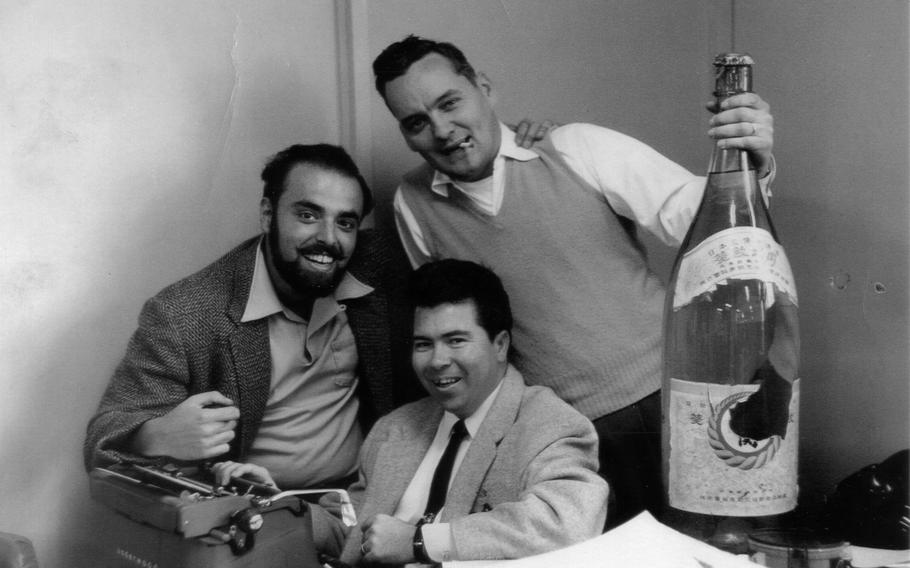 Tokyo, Japan, June 1959: Some Stars and Stripes alumni just could not stay away, even when they made it big. This photo was taken when Shel Silverstein (left), who worked for Stripes as a cartoonist from 1954-1956 and drew the “Take Ten” cartoons, revisited the Tokyo office to see his old pals Al Ricketts, entertainment editor from 1952-1968 (middle), and staff writer Pat Carroll (right), who wrote for the paper in the years 1954-1959. A giant bottle of sake would help in the celebrations. Silverstein would achieve international fame and recognition as an artist, writer and song writer, publishing the immensely popular “The Giving Tree,” (1964) and winning a Grammy award in 1970 for his song “A Boy Named Sue,” made popular by Johnny Cash.

Since 2004 the small (but mighty!) archives staff has worked to make more of our historic content available online. We have digitized our 1948 – 1999 European and Pacific editions, as well as several of our WWII editions and made them available online through http://starsandstripes.newspaperarchive.com/