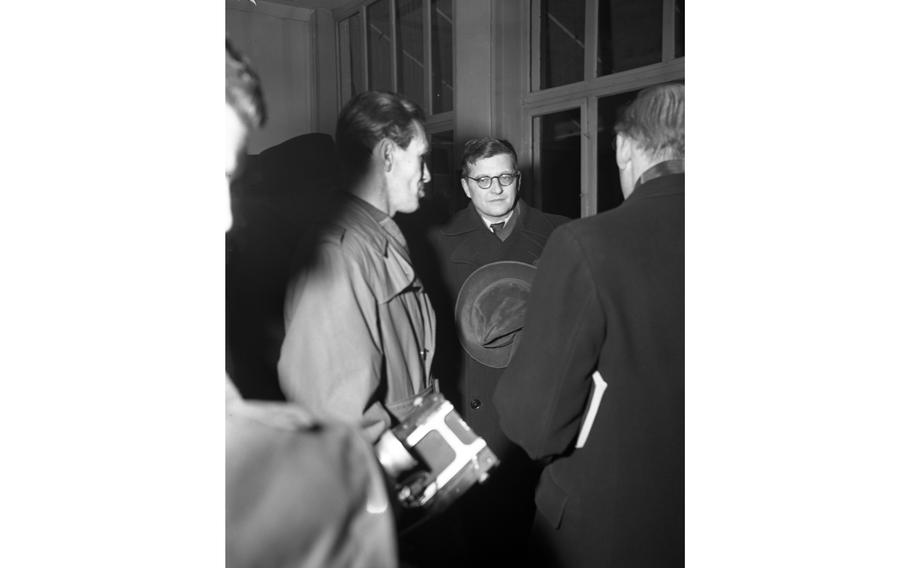 Rhein Main Airport, Germany, March 22, 1949: Russian composer and pianist Dimitri Shostakovich (center, with glasses) is surrounded by reporters and photographers at Rhein Main Airport. The famous composer was en route to New York with fellow Russian intellectuals to attend the Cultural and Scientific Conference for World Peace at the Waldorf Astoria Hotel, March 25-27, 1949. The composer had been denounced twice by the Soviet communist regime, including in February 1948 when the Soviet Central Committee issued a resolution accusing many Soviet composers — including Shostakovich — of composing music “alien to the Soviet people and its artistic tastes.” Many of Shostakovich’s works were banned after the proclamation and Shostakovich was expelled from his teaching positions at the Moscow and Leningrad Conservatories. The ban was lifted shortly before the Waldorf World Peace conference by order of Stalin who called Shostakovich himself to ask him to represent the U.S.S.R at the conference.