The stern of the Navy’s century-old model of the battleship USS South Carolina, which was moved in its case at the Washington Navy Yard in December as the Navy prepares for a new national museum in Washington, D.C. (Michael E. Ruane/The Washington Post)

WASHINGTON — “Straight in!” mover Terry Goodwin called out as the century-old model of the USS South Carolina was eased across the museum floor at the Washington Navy Yard.

“Nice and easy,” he said, as he and five other men guided the old battleship, which is nine feet long, stern first. The casters under its antique glass and mahogany case squeaked. And the movers laid down thin planks to smooth the way.

As the model moved through the museum one day last month, it passed big guns shrouded in plastic tarps, art works under protective covers, and other ship models being readied for relocation.

It was part of the Navy’s preparation for a $450 million flagship museum to replace the almost 60-year-old facility in its cavernous Naval Gun Factory and an adjacent building at the historic yard in Southeast Washington.

The service announced two years ago that it wanted to build the new museum on a roughly six-acre plot on M street next-door to the Navy Yard.

Now, the site has been secured via a land swap with a developer, pending environmental review, the Navy says. The Navy would exchange 15 acres of “underutilized” land in the southeastern part of the yard for the new museum site.

Officials this month announced that five prominent architecture firms had been chosen to develop concepts for the new museum. They include Bjarke Ingles Group, DLR Group, Frank Gehry Partners, Perkins & Will, and Quinn Evans.

Each will receive $50,000 to develop ideas and provide renderings and models that will be unveiled this spring. 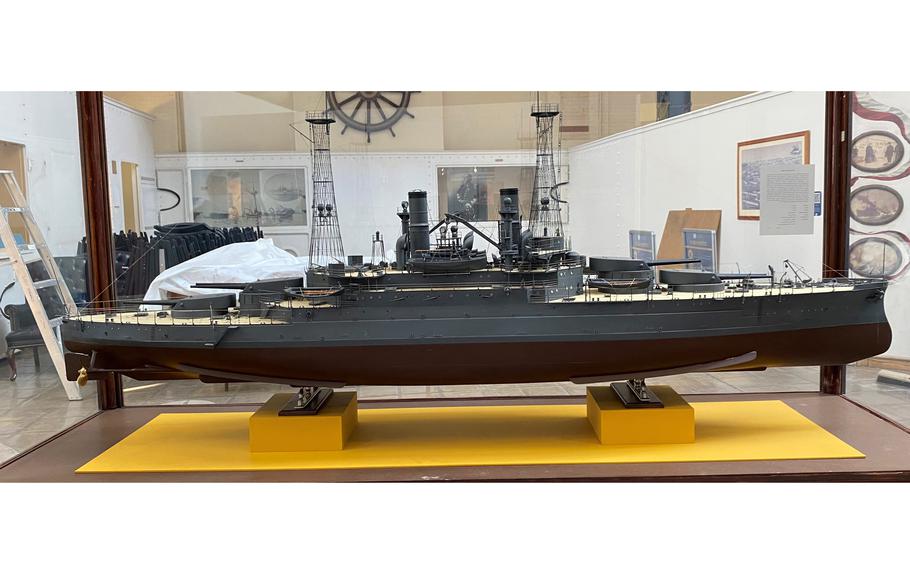 “We’re not really going to pick a winner,” James C. Rentfrow, the acting director of the Navy Museums Division, said recently. “We’re going to have a jury ... [to] provide commentary and comments and pros and cons of each of the five.”

“At some point, it will come down to one, but that’s going to be later in the process,” he said. The Navy hopes to break ground in the fall of 2025.

The current museum opened in 1963. Because it is within the Navy Yard, it has been closed periodically for security reasons in recent years and could be difficult to visit.

In November, the Navy closed the main part of the old museum on weekdays, admitting visitors only on Saturdays from 10 a.m. to 4 p.m. A secondary building has been closed permanently.

The new museum will be outside the yard and will offer full public access, said retired Rear Adm. Samuel J. Cox, the director the Naval History and Heritage Command.

But before the new facility is built, the old museum must be rearranged and repurposed into a staging area.

“The first thing that we have to do is clear out some of the older exhibits here in the main building so that we can create some open storage space,” Rentfrow, the museums director, said recently.

The model of the South Carolina had been on exhibit for 23 years, said Jennifer Marland, the assistant curator of Navy models. It was moved off exhibit to the edge of the museum space on Dec. 13.

There it will stay with other large ship models until they are either placed in the new museum or relocated elsewhere, Rentfrow said. 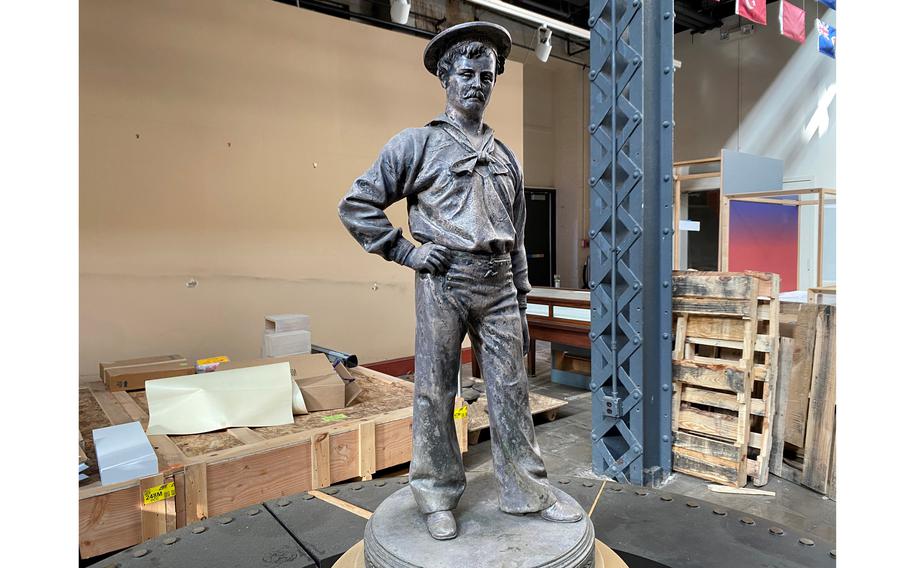 A sculpture in silver of navy sailor Charles W. Riggin, of the USS Baltimore, who was killed in 1891 in Chile. The sculpture is at the Washington Navy Yard museum and will go into storage while the Navy prepares for a new museum. (Michael E. Ruane/The Washington Post)

Artifacts including the huge World II-era Corsair fighter hanging from the ceiling probably will not be moved until the new museum is ready, he said.

Others are awaiting other new destinations.

The ornate, hand-carved “gangway board” from the battleship USS Kentucky will be wrapped, padded and sent to the history command’s collection management facility in Richmond, according to Wesley Schwenk, a museum registrar.

The board, which resembles a fine piece of furniture, features an eagle in relief perched on a globe. Gangway boards were placed at the top of a ship’s gangway as a greeting to sailors and visitors.

The Kentucky sailed with the white-hulled Great White Fleet in the early 1900s and was decommissioned and sold for scrap in 1923.

Another artifact, the statue of slain Boatswain’s Mate Charles W. Riggin, which was made out of silver from thousands of donated dimes, will be weighed and packaged and put into storage at another building at the Navy Yard, according to Schwenk. There, it will get a “rest” while a new location is found for it.

Riggin, who served on the USS Baltimore, was killed in 1891 in Valparaiso, Chile, during an attack by locals apparently angry at the Navy’s presence. His murder, now long forgotten, was front-page news at the time.

As for the ship models, the museum had about 120 on display.

Marland said the models were often made when a ship was constructed, and were meticulously detailed. “These are amazing, amazing works of art,” she said in a recent interview at the yard. “The craftsmanship. The attention to detail.”

Some of the models were displayed at the World’s Columbian Exposition in Chicago in 1893.

They were made of wood, nonferrous metal and wire. On the South Carolina model, pen was used to draw lines indicating deck planks. The South Carolina model probably was created by the Philadelphia firm that built the ship, she said. The ship was commissioned in 1910.

As she spoke, conservator Brian Potter wheeled the model of the destroyer USS Manley on a computer printer stand away from its exhibit space. The Manley was to be displayed in the future at nearby Joint Base Anacostia-Bolling, he said.

But, first, he had to fix a miniature gun that had broken loose. He applied glue, and replaced the gun. “That’s it,” he said.

Manley was commissioned in 1917. The next year, it suffered an accident in which depth charges on board exploded, gutting much of the ship and killing 34 crewmen. But the ship was repaired, put back in service and later served in the Pacific during World War II.

As the South Carolina was eased across the musuem’s bumpy floor tiles, the team tried to keep it from toppling off its stand inside the case, where glass had been removed from one side. The glass was off so curators could adjust the model, which they did several times.

“Is it moving again?” Marland said.

They men stopped. More planks were laid on the floor.

“You see how tight this is in the case,” Marland said. “There’s very little room.”

The move resumed, and, eventually, the battleship reached its destination.

The actual South Carolina, which served in World War I, brought thousands of American soldiers home from Europe when the war ended. It was sold for scrap in 1924, according to the Navy.

“Do we have this battleship today?” Marland said. “No.”

“But we have this model,” she said.