WWII mystery turns 80: Torpedo-struck ship and its crew vanished off NC coast in 1942 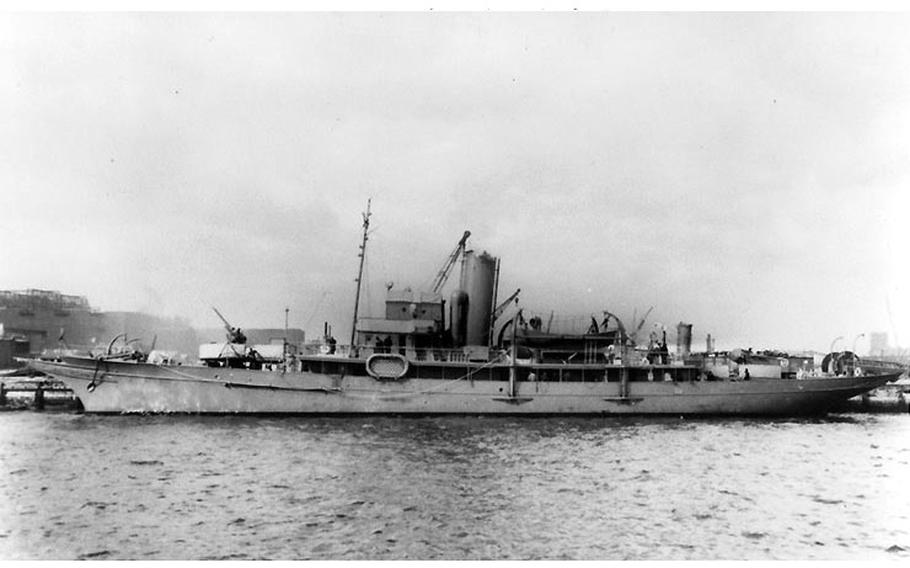 USS Cythera (PY-26) is seen in port in March 1942, nearly two months before a German U-boat sunk it off the coast of North Carolina. (U.S. Navy)

(Tribune News Service) — The 80th anniversary of one of World War II’s strangest sagas — the sinking of the USS Cythera off North Carolina — came and went without notice in 2022, largely because the mystery remains unresolved.

On May 2, 1942, a German U-boat sank the Cythera, then plucked two crewmen out of the Atlantic and took them to a POW camp in Prussia.

Their fate is not the mystery, however.

It’s what became of the ship and 69 other sailors that puzzles historians.

The Cythera has never been found and its the crew — except for two survivors who were taken by the Germans to a prisoner-of-war camp — remains missing.

It’s possible some of the sailors’ bodies may still be in the shipwreck.

For that reason alone, the Navy’s Underwater Archaeology Branch would like to see the ship located. The challenges are many, however, starting with figuring out where to start looking.

“We would be interested in discussing or coordinating with any group planning to search for the wreck,” the branch told McClatchy News.

“A significant portion of the Navy’s ship and aircraft wrecks on the East Coast ... do not have verified locations, especially smaller vessels such as Cythera. As remote-sensing and ocean mapping technology has advanced, there has been a significant increase in the number of shipwreck discoveries in recent years. The probability of locating sites like Cythera improves as well.”

Finding the “patrol yacht” would be a historical coup, military historians say.

Why the Cythera is important

Remembered not only as a civilian craft remade for war, it holds a rare distinction among U.S. Naval vessels for “serving in both World War I and World War II,” NOAA reports.

It also represents the only known instance of Americans being taken by Germans from the East Coast for imprisonment in Germany during WWII, the U.S. Navy says.

However, the ship’s active service in WWII lasted just 24 hours.

The Cythera was on its maiden voyage as a patrol vessel — headed for Pearl Harbor — when she was attacked by the German submarine U-402 “approximately 115 miles east of Cape Fear, North Carolina,” according to Uboat.net.

“The U-boat stalked the patrol vessel for at least two hours and finally submerged for an underwater attack,” the site reports.

“The third (torpedo fired) struck USS Cythera dead center. The ship immediately split in two, and the forward half rose steeply out of the water. The ship sank very quickly and at least two of her depth charges that were preset exploded underwater.”

James M. Brown of New Jersey and Charles H. Carter of Texas survived the explosion after being thrown off the ship.

Brown recalled seeing at least two men “going over the side” just before he went overboard, Navsource.org reports.

“I looked around and saw the last part of the ship, the bow-sprit, sink from sight,” he wrote. “A minute or so later I saw Carter ... sitting in a life raft about fifty feet away from me. ... We looked around in the water to see if we could see any other survivors. We could see none, and only a very small amount of debris.”

The two tried hiding as the U-boat surfaced, “but the moon gave away our position and the submarine closed and picked us up,” Brown said, according to Navsource.org.

“While on the conning tower, Carter and I again looked around for other survivors before we were taken below. The German submarine personnel later told us that they had seen no other survivors or bodies.”

It wasn’t until June, when the ship went overdue at the Panama Canal, that the Navy surmised the ship was lost and alerted families “their husbands/sons had been placed in a ‘missing status’,” the site reports.

Carter and Brown survived their time in prisoner-of-war camps and were “returned to military control, liberated, or repatriated,” the Navy says.

If the Cythera is found any time soon, it will be by accident, possibly during an unrelated seafloor mapping expedition by scientists.

NOAA has done multiple mapping projects off the Carolinas in recent years, but reports it is not “actively” looking for the Cythera nor planning expeditions “outside of the Monitor National Marine Sanctuary” off North Carolina. (The sanctuary is one-square mile around the Civil War wreck of the USS Monitor.)

Anyone who stumbles upon the wreck and disturbs it will be breaking the law, the Navy says. All sunken military craft remain government property “regardless of location or the passage of time, and are further protected from unauthorized disturbance under the Sunken Military Craft Act.”

The Navy’s Underwater Archaeology Branch is responsible for finding such wrecks, but the lack of a general location has made that task formidable with the Cythera. Depth is also an issue. Based on archival records, the Cythera may be in waters 11,000 feet deep.

Therefore, keeping the ship “lost” is the next best option, partly because the Cythera’s depth charges may remain potent, historians say.

“The Navy manages a collection of over 18,000 sunken ship and aircraft wrecks that are distributed worldwide and date from the American Revolution to the beginnings of the nuclear age,” the Underwater Archaeology Branch says.

“These wrecksites are often the final resting places of sailors who paid the ultimate sacrifice in service of the nation, carry significant historical importance, or may contain environmental or public safety hazards such as oil or unexploded ordnance. Accordingly, U.S. Navy ship and aircraft wrecks are in principle to be left in place and undisturbed.”