At left, Massachusetts politician and Civil War general Nathaniel Prentice Banks as depicted in 1852. At right: The champions of the Union, a lithograph created by Currier & Ives in 1861, shows Banks among the front most standing figures, just left of the central seated figure, General Winfield Scott. (WikiMedia Commons/ U.S. Library of Congress)

For the first time in exactly 100 years, the U.S. House of Representatives may need more than one round of voting to elect a speaker when the new Congress convenes on Tuesday.

But a few extra rounds of balloting would be a far cry from the nearly two months and 133 votes the House took to choose its leader in 1856 - the longest and most contentious speaker election in its history.

The race pitted antislavery Rep. Nathaniel "Bobbin Boy" Banks, a member of the nativist American Party from Massachusetts, against candidates who were open to expanding slavery to new states and territories. The debate raged on amid mounting violence between proslavery and antislavery settlers in "Bleeding Kansas."

Today, Minority Leader Kevin McCarthy (R-Calif.) is struggling to win enough votes to be elected speaker when Republicans take narrow control of the House, as he faces opposition from some right-wing members of his party. As a result, it may take more than one ballot for anyone to gain the 218 votes, or the majority of votes cast for candidates, needed to win the speakership. McCarthy has warned fellow Republicans against a floor fight, saying, "If we play games on the floor, Democrats could end up picking who the speaker is."

The last time a speaker election took more than one ballot was in 1923, when Speaker Frederick Gillett (R-Mass.) was reelected on the ninth ballot.

But the longest speaker vote began on Dec. 3, 1855, when the 34th Congress convened. Democrats controlled the Senate, but no party controlled the House after the disintegration of the Whig Party. About a third of House members were Democrats. The rest belonged to a mix of parties, including the new Republican Party. Many were members of the secretive American Party, also known as the Know Nothing party.

On the first day, 21 candidates vied for the speakership. Four votes were taken. The early leader was Rep. William Richardson (D-Ill.), who favored permitting future states to allow slavery, with 74 votes, far short of the 113 needed for a majority. A few days later, antislavery members lined up behind the American Party's "Bobbin Boy" Banks, who as a boy worked in a textile factory carrying bobbins of thread to the women who operated the looms. The 39-year-old Banks, the New York Herald reported, was "a good looking man" with a stiff, puritanical manner who "is even said never to have drank a glass of liquor in his life."

On the 33rd tally, in mid-December, Banks received 100 votes to Richardson's 73, and the deadlock continued into the new year as the slavery debate heated up. "This is not a mere contest as to a Speaker of the House; it is but an incident in a long and arduous struggle which is to determine whether slavery will be the pole star of our National career," Horace Greeley's New York Tribune wrote.

The fiery floor debate turned violent outside the Capitol in late January as Greeley, who supported Banks, was leaving a House session. A burly man approached the Tribune publisher and "struck me a stunning blow on the right side of my head and followed it by two or three more, as rapidly as possible," Greeley wrote. The attacker was anti-Banks Rep. Albert Rust (D-Ark.).

Finally, on Feb. 1, 1856, Democrats adopted a new strategy. First, they backed a new speaker candidate, proslavery Rep. William Aiken Jr. (D-S.C.), the 50-year-old son of railroad magnate William Aiken Sr., after whom Aiken, S.C., was named. Second, Democratic leaders announced that they would propose the next day a previously rejected resolution to elect a speaker with only a plurality vote. Under this plan, if a majority of members failed to elect a speaker in three consecutive votes, the candidate who got the most votes on a fourth tally would win.

Aiken was sure to win over enough Southern House members to gain a plurality and the speakership, newspapers reported. "We think we can count 109 votes for Mr. Aiken, if jealousy or something else does not defeat him," a Washington Star correspondent wrote. That night, Democratic President Franklin Pierce congratulated Aiken in advance on his victory.

On Saturday, Feb. 2, in Washington, "the sun rose on an excited city," the New Orleans Picayune reported. That afternoon, Rep. Samuel Smith (D-Tenn.) proposed the plurality resolution, "intimating his belief it would elect Mr. Aiken." The resolution passed. "The excitement now became very great," the Picayune wrote. On the third vote, Banks led Aiken 103 votes to 95, short of a majority. Some of the remaining speaker candidates then dropped out, with Aiken poised to scoop up their backers.

The fourth, plurality vote began. As the clerk tallied the total, "the excited crowd on the floor and in the galleries looked on in silence," the Picayune reported. "The suspense at this crisis was agonizing. Every eye turned and every ear inclined with intense interest towards the clerk's desk to hear the result."

Just before 7 p.m., the clerk announced the total: 103 votes for Banks, 100 for Aiken. Some lawmakers who had been expected to switch to Aiken had not come through. "As the result was announced, the audience in the galleries manifest their joy by peal after peal of deafening cheers," the Picayune wrote. "The ladies waved their handkerchiefs wildly and clapped, and [anti-Banks] gentlemen stamped and raved, and swore." 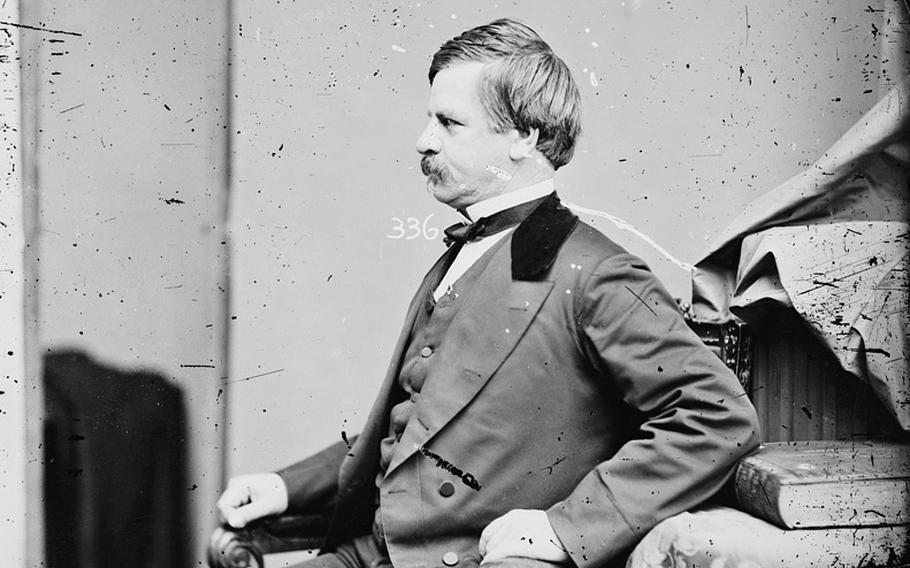 Nathaniel Banks of Massachusetts was voted U.S. House speaker in 1856 in the longest such election in U.S. history. (Brady-Handy photograph collection/Library of Congress)

Banks, with his "thick dark hair swept to one side and a prominent mustache obscuring his upper lip," addressed members from the speaker's chair, according to the House's official history. He noted that his job was "now environed with unusual difficulties."

The difficulties increased. In mid-May, Sen. Charles Sumner (R-Mass.) spoke against allowing slavery in Kansas while chastising a senator from South Carolina who supported "the harlot, Slavery." Three days later, as Sumner worked at his Senate desk, Rep. Preston Brooks (D-S.C.) approached and accused Sumner of speaking "libel" against his state. Brooks began beating Sumner on the head with his metal-tipped cane. Sumner was knocked to the floor, as bystanders shouted, "Hit him, Brooks. He deserves it." Some senators finally restrained Brooks, and others carried Sumner out with his head bleeding. The House, with Banks's support, voted to expel Brooks, who resigned but was soon reelected.

Banks, who never embraced the Know Nothings' anti-immigrant stance, served one term as speaker and was then elected governor of Massachusetts as a Republican.

In the House's 234-year history, 14 speaker votes have required multiple ballots. With the rise of the two-party system, only two have come after 1856.

The job of House speaker is often a frustrating one, but not as frustrating as another top federal post, according to late House Speaker John Nance "Cactus Jack" Garner (D-Tex.), who said: "Worst damn fool mistake I ever made was letting myself be elected vice president of the United States. Gave up the second most important job in government for eight long years as [Franklin] Roosevelt's spare tire."

Ronald G. Shafer is the author of "Breaking News All Over Again," a collection of his Washington Post Retropolis columns.