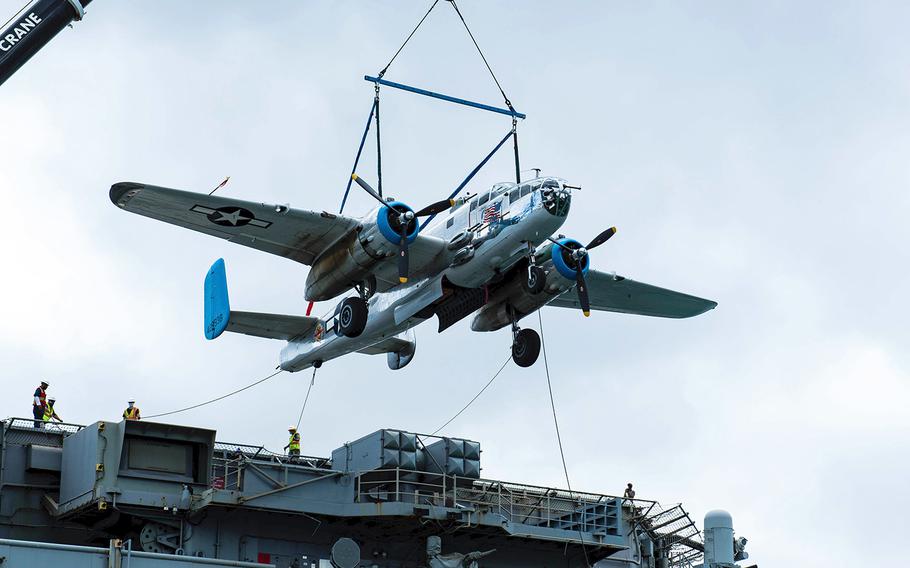 A B-25 Mitchell bomber is unloaded from the USS Essex in Pearl Harbor, Hawaii, Aug. 10, 2020. The USS Alabama Battleship Memorial Park, which has the 35,000-ton battleship as its centerpiece in Mobile, also has a collection of military weapons and aircraft, including a B-25 Mitchell bomber that has been in the park’s collection since the late 1970s. (Jessica Blackwell/U.S. Navy)

The USS Alabama Battleship Memorial Park, which has the 35,000-ton battleship as its centerpiece in Mobile, also has a collection of military weapons and aircraft, including a B-25 Mitchell bomber that has been in the park's collection since the late 1970s.

Shae McLean, curator at the memorial park, said the B-25 had been restored and modified many times, including a just-completed two-year restoration that re-creates the interior and exterior of the second B-25 to take off from the aircraft carrier USS Hornet on April 18, 1942.

That plane was piloted by Travis Hoover, who moved to Joplin later life, and co-piloted by William N. Fitzhugh, who grew up in Texas and lived in Mobile later in his life. Both men held the rank of U.S. Army lieutenant at the time of the raid. The rest of the crew was navigator Lt. Carl Richard Wildner, bombardier Lt. Richard Ewing Miller and engineer and gunner Staff Sgt. Douglas V. Radney.

Mike Thompson, the aircraft manager at the park who restored the plane, said he felt strongly about restoring this craft to this configuration in honor of Fitzhugh, who died in 1981.

"I knew Bill Fitzhugh well," Thompson said. "I tell everyone I have probably the most important job here. My job is to make sure no one forgets the memories of the men and women. … We don't forget any of them. Bill was a local guy, but I include the whole crew, so this is for Travis Hoover too. They're all here."

Paul Zerkel, a Joplin resident who is a grandson of Hoover, said he only recently learned of the restoration and is looking forward to getting a chance to go to the park to see the plane.

"I think that would be unlike anything we've seen," Zerkel said. "I couldn't imagine seeing something that was that close to his plane. It would almost be overwhelming to see something like that and then to know what was going to happen to those men after they took off."

McLean said the huge battleship, with its massive armor protection and 16-inch guns in three three-gun turrets, is obviously the centerpiece of the park, but the other parts of the collection, including the submarine USS Drum, and the aircraft in the collection tell a story of sacrifice for the nation.

This B-25, which was moved to a permanent display indoors after its restoration, will tell one chapter of that story.

"I just think it's so very important to remember the significance of the Doolittle Raid, that this raid came against all odds at a time when the U.S. was not winning the war," McLean said. "It's so easy for us to think the U.S., you know, we were attacked and it was all downhill from there, and it certainly wasn't. There was quite a bit of time after the Pearl Harbor attack when America was going backward and losing battles."

Doolittle's raid on Japan was a direct retaliation for the Dec. 7, 1941, raid on Pearl Harbor that crippled the U.S. Pacific Fleet, killed more than 2,400 Americans and forced America into World War II.

The challenges were significant. No one had even tried to take off from an aircraft carrier in a twin-engine Army bomber that was much larger than single-engine carrier planes, but the B-25 was found to be up to the task, even with an enlarged load of fuel and a bomb load big enough to make an impact.

"The Japanese were gaining ground, and it didn't look like they were going to stop anytime soon, so what the American people needed was precisely what Doolittle gave," McLean said. "That was a victory, any victory, and to do it in such a fashion with such a daring raid — here we have bombers launching from aircraft carriers, something the Japanese certainly never saw coming, and to some extent it put them on the defensive from that point forward. When you're having your capital city bombed early in the war, it makes you maybe rethink your strategy."

The USS Hornet, along with the carrier USS Enterprise and escorts, set off for Japan across enemy-controlled waters.

The plan was to launch the bombers from 400 miles east of Japan, but a Japanese fishing boat spotted them 650 miles away and radioed a warning.

The Americans launched immediately, but that meant the planes would not have enough fuel to reach friendly airfields.

The planes struck their targets and were forced to ditch on or near the east coast of China.

Hoover, Fitzhugh and his crew made it to friendly territory with the help of Chinese guerrilla fighters, including Tung Sheng Liu, a Chinese aeronautical engineer who befriended the Americans.

Liu would reconnect with the Doolittle raiders at a reunion in 1948 and stay in touch with Hoover until Hoover died in 2004.

Thompson said the B-25 in the park's collection was built as World War II was ending and never saw combat. It served as a pilot trainer in the 1940s and 1950s in the Air National Guard before being sold as surplus to a former B-25 pilot who lived in the Mobile area.

He modified the plane extensively and used it as a crop duster and to bomb fire ant colonies, which are a big problem on the Gulf Coast.

The plane was donated to the park before Thompson started there in 1984 and has been painted in a number of configurations and stored outdoors before this most recent restoration.

He said that in the past the plane had been restored with a solid nose filled with eight .50-caliber machine guns to honor some of the squadrons that used the type for low-level strafing missions later in the war.

But with this last restoration, the museum decided to move the plane into its aircraft pavilion and display it permanently indoors.

Thompson said he'd always wanted to restore the plane to honor Fitzhugh and the Doolittle Raiders but hesitated as long as the plane was parked outside in the weather because the clear plexiglass nose tended to leak when it rained.

The move indoors meant he could restore it to a 1942, B-25B configuration, which was the plane used in the Doolittle Raid.

Thompson said he's restored the interior of the plane to look like those planes that took off from the Hornet, including the wooden "machine guns" in the tail meant to scare Japanese fighters from attacking the plane, and all the extra fuel tanks installed throughout the plane to almost double its range.

Many of the real guns, along with other equipment, were removed to make the planes as light as possible for the carrier take off and to extend the range.

"For me, for Bill, my idea all along was to restore this plane as the Doolittle No. 2 plane for him," Thompson said. "When I first got here, it had a glass nose on it which was in poor shape because the hurricanes had beat it up so bad. The airplane has been underwater four times, three times since I've been here. I've been working on this airplane for two years. I've completely changed the outside and inside of the airplane."