Historic USS Constellation back in shipshape condition after hull repairs 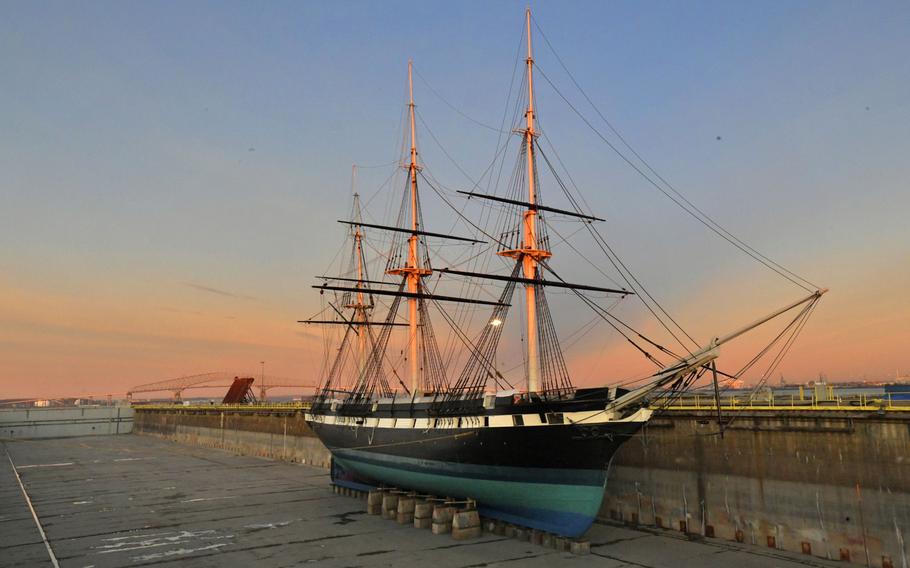 The USS Constellation, with her hull freshly painted, sits on blocks in the dry dock at Tradepoint Atlantic Shipyard in Sparrows Point, Md., after the completion of eight weeks of repairs. The dry dock will be partially flooded so that the 1854 sloop-of-war can be checked for leaks, and then fully flooded on the morning of her return to the Inner Harbor. (Amy Davis, Baltimore Sun/TNS)

As a stopgap measure before they could get the 19th century sloop-of-war into dry dock for repairs, divers began making emergency patches about every six weeks.

“Ideally, a wooden ship needs to get out of the water every five years for repairs,” explained Rowsom, executive director of Historic Ships in Baltimore.

It’s taken seven years to raise the money for this dry dock visit, which has just been completed at a cost of roughly $1 million. “Visitors keep the lights on and pay staff, but don’t pay for big-ticket items,” Rowsom said. State and city funding totaling $2.795 million also will cover other major repairs to the National Historic Landmark at its berth at the Inner Harbor. 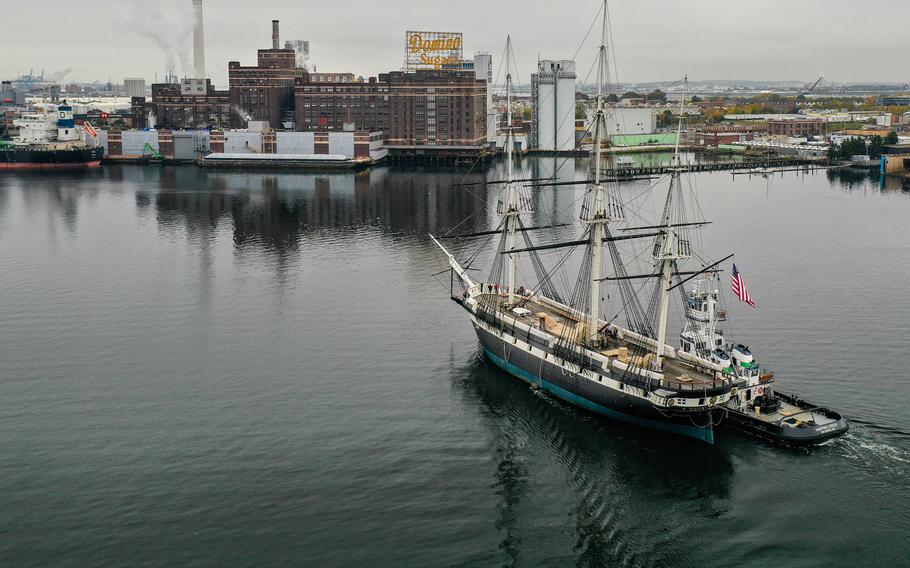 The historic USS Constellation is pushed out of the Inner Harbor en route to dry dock at Tradepoint Atlantic for hull repairs. (Jerry Jackson, Baltimore Sun/TNS)

The Constellation battled the slave trade in its first years, capturing three slave ships off the coast of Africa by 1861 and rescuing 3,700 enslaved people. During the Civil War, the Constellation guarded Union merchant ships in the Mediterranean. Among her other assignments was carrying relief supplies to Ireland during the potato famine in 1880. Brought out of retirement in 1940, the Constellation served as a shore-based relief flagship for the U.S. Atlantic Fleet during World War II. When the sloop-of-war was decommissioned in 1955, it was the oldest ship in the U.S. Navy.

The Constellation was relocated to the Inner Harbor in 1968, but with inadequate funding, the ship continued to deteriorate. The once-mighty tall ship, now sagging and possibly headed for the scrap heap, was closed to the public in 1994. A new Constellation Foundation raised the funds for critical repairs, and today the Constellation is a floating museum operated by Historic Ships in Baltimore, a program of the Living Classrooms Foundation.

General Ship Repair, a small shipyard in Locust Point, was contracted to dry dock and paint the Constellation this fall. Dockmaster Eddie Stevens oversaw the arrival of the Constellation on Oct. 25, when it was brought under tow to the Tradepoint Atlantic Shipyard at Sparrows Point.

Stevens, who jokes that “All I do is pick up ships for a living,” spent 28 hours working with two diver crews to get the ship perfectly centered on preset blocks. Then it took 24 hours to pump the water out of the 1,200-foot-long dry dock. Nestled on blocks inside the cavernous dock, the Constellation looked as diminutive as a songbird resting in a fallow field.

Next, it’s scrub time, using a low-pressure wash and general scraping to remove barnacles, mussels and other marine growth from the ship’s bottom. After this rugged facial, the makeup artists, a crew of five shipwrights, their apprentices, plus volunteers, meticulously scrape and brush every pore of the hull in preparation for patching and painting. 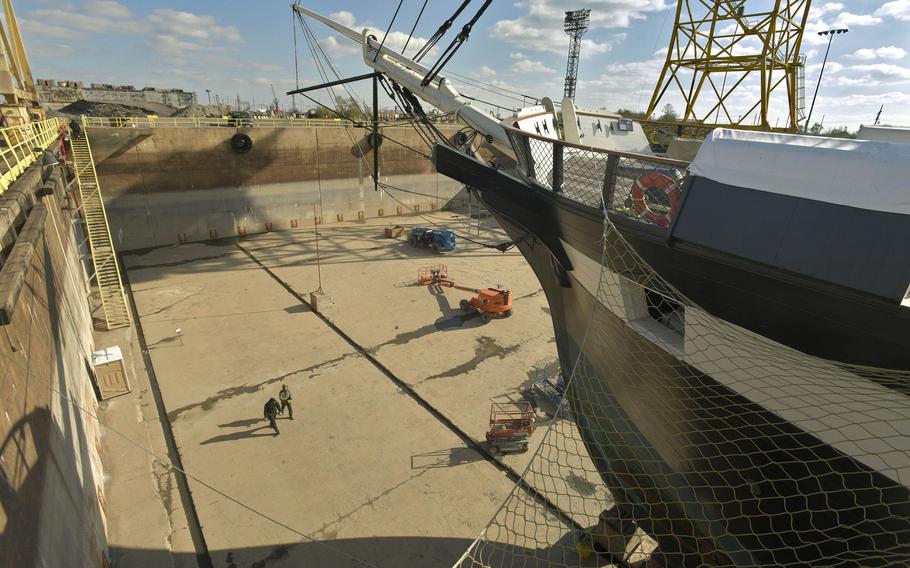 Workers descend 60 steps to the floor of the dry dock where the USS Constellation was being repaired. The ship returned to the Inner Harbor on Monday, Dec. 19, after eight weeks of repairs at Tradepoint Atlantic Shipyard. (Amy Davis, Baltimore Sun/TNS)

Mike Vlahovich, a shipwright from Croatia, assembled the team of shipwrights, who use the same techniques employed in the 19th century. Oakum, a material made of hemp soaked in pine tar and oil that is embedded between the long ship planks, is ripped out in a process called reefing. First cotton, then fresh oakum, is neatly threaded into the narrow plank seams, and covered with Portland cement. Where the plank butts, or edges, meet, small sheets of lead are tarred and nailed into place to patch potential leak points. If shipwrights discover a section of old damaged wood, it is carefully carved out and replaced with a new piece of wood cut to size, called a “Dutchman.”

Assisting the experienced shipwrights, who were recruited by Vlahovich from around the country, are five apprentices new to ship repair. These men are Baltimore City Corrections prerelease inmates, who came to the Constellation through a partnership with Living Classrooms. After six weeks spent learning skills from the shipwrights, the apprentices have the opportunity to continue with Project Serve, a reentry job-training and life skills program for ex-offenders.

While rolling paint, apprentice James Scott comments that “the Constellation has a long history of social justice.” Shaquawn Meredith, another apprentice, adds, “I like that I’m working on something that generations of people have worked on. That’s cool — plus we get a blast of fresh air.” The bracing wind that whips through the vast dry dock does not seem to diminish the enthusiasm of the crew. While painting the plank seams, Meredith observes, “These are skills I’m going to take with me. Never know where I’m going to use them.”

Finally, the crews apply 90 gallons of paint to the hull. The final two coats of paint are a blue-green that mimics the patina of the original weathered copper sheathing. After the paint dries, the dock is partially flooded on Dec. 14, so that Rowsom can inspect the hold to look for any leaks. Fortunately, only weeping seams are found, which he minimizes by cranking up a couple of bilge pumps.

On Monday morning, the 168-year-old USS Constellation, finally watertight, makes the two-hour journey, under tow, up the Patapsco River from Sparrows Point to its berth in the Inner Harbor. As he supervises the crew securing the lines at its Pier 1 berth, Rowsom looks relieved as he reports: “We made it here and the ship is in good shape. It was an uneventful trip, which is the best kind.” 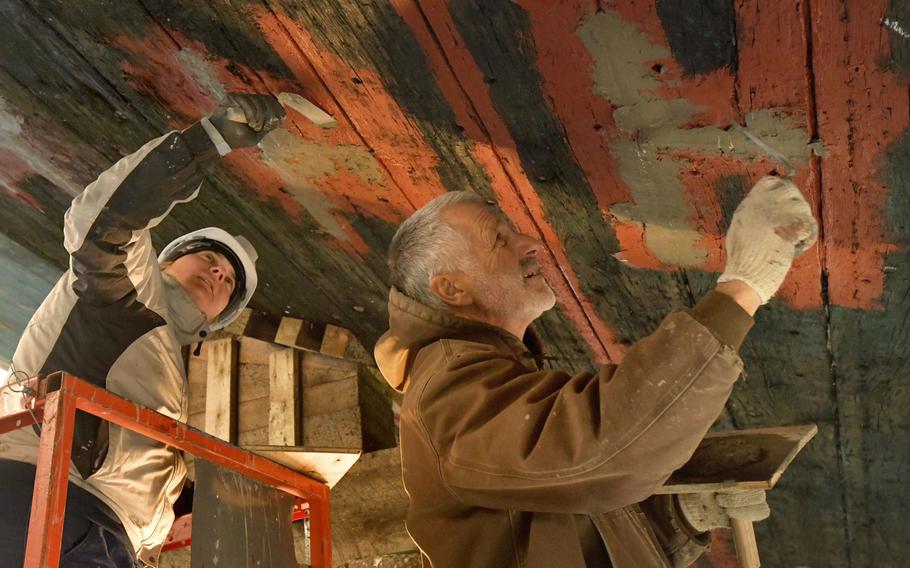 Mike Vlahovich and his wife Lovorka Vlahovich, left, apply cement to seal the cracks between planks, a process called paying the seams. Mike Vlahovich, a shipwright who rebuilds Maryland skipjacks, assembled a team of shipwrights from around the United States to work on the USS Constellation. The ship returned to the Inner Harbor on Monday, Dec. 19, after eight weeks in dry dock for repairs. (Amy Davis, Baltimore Sun/TNS)