Ship in German ‘Titanic’ film sank, killing far more than the real one 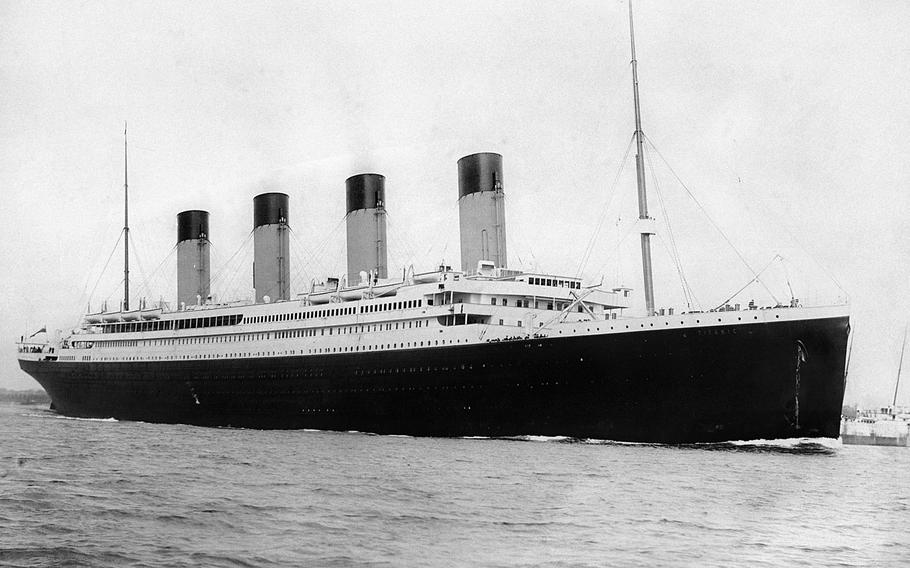 The RMS Titanic, which sank in the North Atlantic on April, 15, 1912. A half-century before James Cameron’s blockbuster premiered in the United States, the Nazi-commissioned “Titanic” took the life of its director — and then thousands more when its ship sank. (Francis Godolphin Osbourne Stuart/public domain)

Twenty-five years ago Monday, the blockbuster film “Titanic” premiered in the United States, kicking off a historic run that would bring in a record $1.85 billion worldwide and win 11 Oscars.

But 54 years earlier, in 1943, another film titled “Titanic” hit cinemas. It made history in a different way — by spreading Nazi propaganda, costing the director his life and using a ship for filming that would itself sink and kill far more people than the actual Titanic disaster.

The story of the RMS Titanic has been told many times on-screen, from Roy Ward Baker’s relatively accurate “A Night to Remember” (1958), made with input from surviving Titanic passengers and crew, to the animated octopus heroics of “The Legend of the Titanic” (1999) and the horror-themed “Titanic 666” (2022).

The 1943 “Titanic,” made by the Nazis during the height of World War II to show off the Germans’ superior morals and moviemaking skills, was actually the country’s third take on the disaster, following “In Nacht und Eis (Shipwrecked in Icebergs)“ (1912) and “Atlantic” (1929). With this latest retelling, the filmmakers sought to frame the ship’s sinking as the fault of imperialist Western arrogance.

The movie doesn’t make this point subtly. Joseph Bruce Ismay, the English chairman of the White Star Line, which owned the Titanic, is played with evil relish by E.F. Fürbringer, made up to look like a villain from a Western. At the ship’s banquet, all the wealthy guests are announced alongside their net worth. Ismay’s business buddies look on and cackle about jewels, power and profits.

It’s this single-minded obsession with stock markets that causes the liner to speed dangerously through Iceberg Alley, as Ismay seeks to break transatlantic crossing records so that his shares in the company rocket in value.

But it seems the Nazis were equally money-minded, as documented by Robert P. Watson in his 2016 book “The Nazi Titanic: The Incredible Untold Story of a Doomed Ship in World War II.” With a 4 million reichsmark budget — the equivalent of roughly $180 million today — the German “Titanic” was one of the most expensive films of the 20th century, though it’s not obvious from the results on-screen. The ship, for example, is alternately tilted and level after the collision, and censorship by Nazi propaganda minister Joseph Goebbels, who commissioned the film, may be responsible for some of the awkward dialogue.

Location shooting began in May 1942 in a German-occupied Baltic Sea port and onboard the SS Cap Arcona, a former ocean liner requisitioned by the German navy. From the outset, there were signs of trouble. The movie’s director, the veteran Herbert Selpin, fell afoul of German navy officials by requesting more technically complex sets, a move seen as siphoning off funds from the war economy. Serving soldiers were removed from front line fighting to work as extras — and proceeded to hassle the actresses.

The film took significant liberties with the truth, most notably the insertion of a fictional German first officer, the heroic Petersen, played by Hans Nielsen. During the sinking, he and his German ex-companion Sigrid Olinsky (played by Sybille Schmitz), are the only composed passengers, with Olinsky calmly rebuffing English cads and Petersen rescuing several children, including a girl left to drown by her money-mad parents, who have absconded with suitcases of cash.

The movie’s twisting of facts to suit the Nazis’ agenda meant major creative differences behind the scenes. Selpin, frustrated with the interference of military officials on set and the fact each day’s rushes had to be sent to Berlin for approval, made remarks critical of the Nazi regime. He was denounced by the film’s screenwriter to the authorities, arrested, interrogated by Goebbels and found hanged in his prison cell the next morning.

The film had to be completed by an uncredited director, Werner Klinger. On the night before its scheduled premiere, the British Royal Air Force bombed the theater that was housing the movie’s answer print.

“Titanic” eventually made its public debut in November 1943. But its most important critic — Goebbels — was distinctly unimpressed. He’d seen the film in December 1942 and ordered it banned in Germany; it premiered in Prague instead.

The propaganda minister believed the film’s scenes of panic, drowning and death wouldn’t sit well with an audience living through regular bombing raids. He also feared that a film about a doomed vessel captained by incompetents might send the wrong message about the German war effort, which by 1943 was struggling. Goebbels’s compatriots further objected to Petersen’s recklessness, which flew in the face of the Nazis’ “Führerprinzip,” a requirement to obey orders.

“Titanic” was a commercial disaster that wouldn’t be released in Germany for almost 50 years, though due to its anti-capitalist sentiments, it was dubbed into Russian after the war and screened in parts of the Eastern Bloc.

But the worst crisis came after the film was completed, and it had nothing to do with artistic choices.

After shooting wrapped, the boat that stood in for the Titanic, the Cap Arcona, was briefly used to move troops around the Baltic before being reclassified as a prison ship and docked in the Bay of Lübeck.

On May 3, 1945, three days after Adolf Hitler’s suicide, it was holding a reported 6,000 prisoners from the Neuengamme concentration camp, driven there by Nazis anxious to conceal their atrocities from the advancing Allies. (Some estimates put the number of prisoners as high as 7,000.)

Western intelligence had discovered that SS leaders were amassing in the German harbor city of Flensburg, plotting a potential sea escape to Norway. Believing the Cap Arcona to be filled with fleeing Nazi military elite, the British Royal Air Force bombed the ship, which capsized and sank. Pilots then shot at survivors in the water.

The death toll from the ship that had once masqueraded as the Titanic is estimated to be between 4,500 and 7,000 lives. The real Titanic claimed 1,517.

In a final twist worthy of James Cameron’s romanticized 1997 film, star-crossed lovers were united at the height of the tragedy. One of the 350 survivors of the Cap Arcona tragedy was German communist prisoner Willi Neurath. His wife, who was stationed nearby as a navy assistant at Neustadt submarine school, found her husband on the beach by sheer luck, exhausted but alive. Unable to swim, he’d survived by remaining on the burning ship, and was rescued by a British reconnaissance regiment once the Royal Air Force had learned the fatal error of its attack.