WASHINGTON — In 1923, Congress decided the federal government needed a new independent agency to recognize fallen American troops from battlefields around the world and take care of the memorials and monuments in foreign lands that honor them.

“For 100 years, [we] have ensured that the memory of those who fell overseas defending our nation will never fade,” the commission said in a statement. “As one century of this noble mission ends and another begins, ABMC is renewing the nation’s promise to ensure, in the words of General of the Armies John J. Pershing, that ‘time will not dim the glory of their deeds.’ ”

On Wednesday, ABMC kicked off its centennial celebration with the hope it will educate more Americans of its purpose and encourage them to visit any one of its dozens of sites that honor fallen U.S. troops from several conflicts, including World War I, World War II, the Korean War and the Vietnam War.

ABMC, for example, operates and maintains the Normandy American Cemetery and Memorial in France, where more than 9,300 U.S. troops are buried. Many troops who were killed during the D-Day landings in 1944 are buried there. Same goes for the Ardennes American Cemetery in Belgium, the Santiago Surrender Tree in Cuba and the North Africa American Cemetery in Tunisia — as well as 54 other foreign burial grounds, memorials and markers.

“These sites have become a way to share both our cultural and our historical heritage,” retired Army Lt. Gen. Mark Hertling, ABMC’s chairman, said Wednesday at the centennial kickoff event. “That’s what has happened in the first century. But now as we’re about to enter the second century, we have an opportunity.” 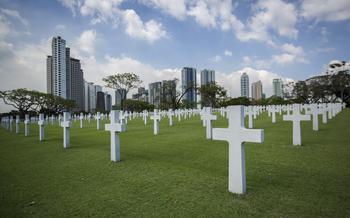 A photo of the Manila American Cemetery in Manila, Philippines, in 2015. (Donald Holbert/U.S. Marine Corps) That opportunity, he said, is introducing new generations to America’s fallen war heroes at ABMC’s 26 burial grounds and 32 memorials and monuments in other countries such as Panama, Luxembourg, Mexico, Tunisia, Cuba, Papua New Guinea and Morocco.

“We plan to expand our message,” Hertling said, noting 2.5 million people visited the sites in 2022. “The majority of visitors to our sites, truthfully, are not American. They are the local nationals who want to understand things better than we even do about what these [troops] fought for and died for.”

Officially, ABMC’s 100th anniversary arrives in March, and officials said they’re planning bigger celebrations at the sites for Memorial Day in May. Virtual tours of the sites online also are coming, the commission said.

In all, the commission cares for the remains of more than 200,000 fallen American troops in the burial grounds outside the United States. 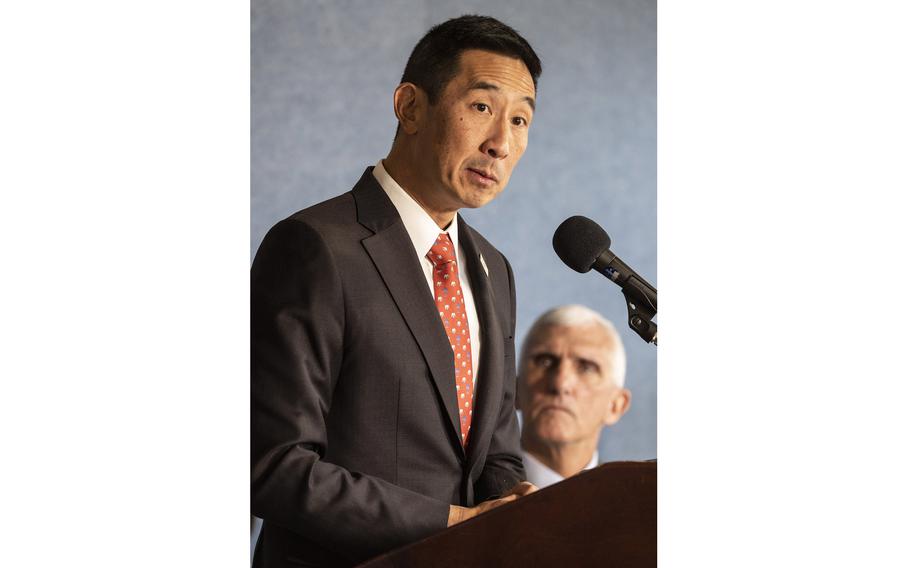 Charles K. Djou, secretary of the American Battle Monuments Commission, speaks at a news conference on Wednesday, Dec. 14, 2022, at the National Press Club in Washington, D.C. In the background is retired Army Lt. Gen. Mark P. Hertling, chairman of the commission. (Joe Gromelski/Special to Stars and Stripes)

“After the fighting ended in WWI, America gave families the option of repatriating the remains of their loved ones or keeping them overseas with their brothers-in-arms, where they fell in battle,” said ABMC Secretary Charles Djou, who served as a congressman from Hawaii from 2010-2011. “Most families opted to keep their loved ones overseas with their fellow service members and hence my agency, the ABMC, was created to care for these fallen soldiers who remained overseas.”

To help commemorate the centennial and maximize exposure, the commission produced a documentary film about the sites honoring America’s fallen troops. A few minutes of the film were aired at Wednesday’s centennial event.

“While the film shares some very powerful stories from our past 100 years, it also looks forward at our mission into the future,” said Mike Knapp, ABMC’s chief of historical services.

The documentary film will premiere sometime in 2023.