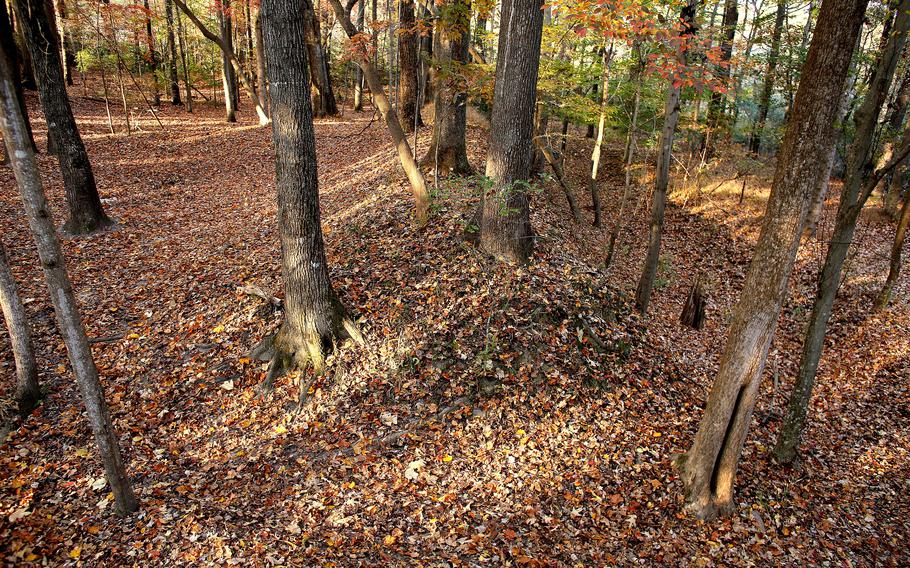 Chesapeake hopes to turn a 5-acre plot of land off Jolliff Road into a historical park. (Stephen M. Katz, The Virginian-Pilot/TNS)

But those efforts aren’t likely to begin in earnest until next year or 2024, as the city is currently working to acquire ownership of the land from the Virginia Department of Transportation. The site includes about 67 acres located approximately 400 feet south of Davids Mill Drive.

The site first came to the city’s attention about five years ago from members of the Hampton Roads Civil War Roundtable, an informal group of dozens of local historians. Union soldiers reportedly set up along a major transportation route to keep the rebel army from heading farther into the region, but the fort might have been constructed by the Confederates before then.

The fort is in a densely forested area with dirt walls measuring a few feet high, according to a 2021 Virginian-Pilot article. Located in the center is a circular earthen structure about the size of a large kiddie pool with knee-high walls.

The discussions between local historians and city staff then evolved into an official city park project. VDOT took over the land while constructing Interstate 664 decades ago, but once transferred, city staff can begin developing a park that includes a trail system and interpretive signs. Jessica Cosmas, the historical services manager in Chesapeake, said staff also want to install more parking to make the area more accessible.

Cosmas said VDOT has done some initial surveying, but a comprehensive environmental review is needed before the state can turn it over to the city. It can take months, and Cosmas said VDOT doesn’t expect to begin that part of the process until next spring. The review includes determining whether any wildlife exists and could be disturbed throughout the project’s construction and whether any toxic substances are present, for example.

Cosmas said though Chesapeake is a relatively young city, it’s “very rich in history” and that this project hopes to be another way to show that.