'Not a whole lot of people remember': Notable Japanese WWII POWs once housed at Pennsylvania resort 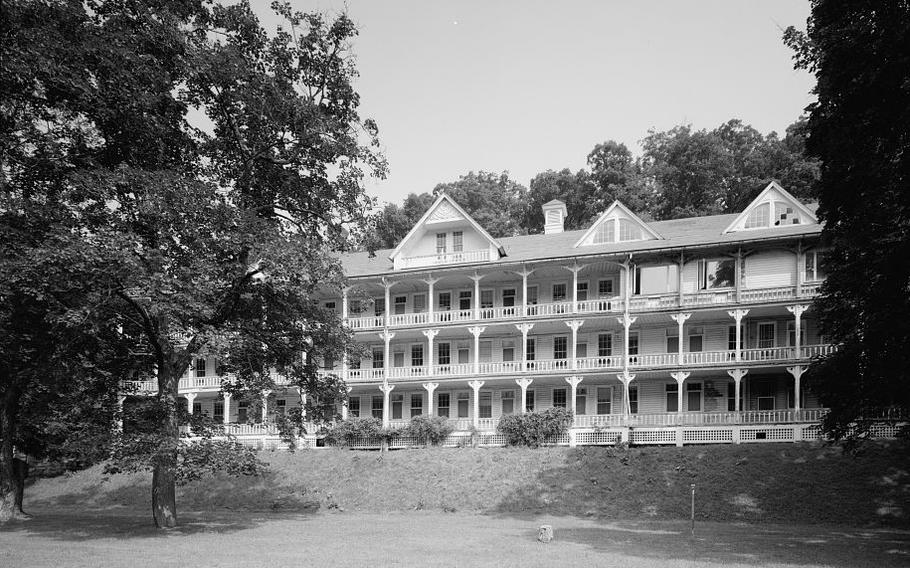 The Bedford Springs hotel, which dates back to 1806, was temporarily turned into a prisoner-of-war camp during World War II. (Historic America Buildings Survey/Library of Congress)

BEDFORD, Pa. (Tribune News Service) — Hiroshi Oshima, the once-powerful Japanese ambassador to Germany, was reduced to being a prisoner of the United States by the time World War II ended — albeit one who was spending his days at bucolic Bedford Springs.

He was not alone at the former resort that was temporarily turned into a prisoner-of-war camp.

What appears to be the most detailed document known about the internees, complete with names and positions, listed 119 adult men, 29 adult women, 20 male children and 17 female children, with attaches, chancellors, military leaders, doctors, journalists, engineers and secretaries among them. A Bedford Gazette article from the time referred to the prisoners as the "blue chips of war."

By then, Japan's military success — including the attack on Pearl Harbor that took place 81 years ago on Dec. 7, 1941, and brought the United States into the conflict — had ended long ago. The Allies pushed the empire back — at Midway Island, Guadalcanal, Saipan, Guam, Iwo Jima, Okinawa and with bombing raids on the mainland — until Japan unconditionally surrendered on Aug. 14, 1945.

Word of the war's end soon reached the prisoners in Bedford as locals rejoiced in victory.

"They took the news of Japan's surrender unemotionally, even stoically," Arthur E. Barbeau wrote in "The Japanese at Bedford." "Oshima was given the word that morning; he informed the others. Undoubtedly, Bedford's celebration lasted far past the time when the Japanese retired to their rooms some fifteen minutes before their 11:00 p.m. curfew."

According to a newspaper clip in the Bedford County Historical Society's extensive archives about the prisoners, a State Department official described the scene as Oshima told his fellow prisoners that Japan had lost the war: "They just took it. They bowed to each other and the conference was over."

Oshima, a confidant of Adolf Hitler, was eventually tried, convicted and sentenced as a war criminal.

'It made sense to bring them here'

The Bedford Springs hotel, which dates back to 1806, served another purpose — as a training facility for Navy radio operators — during much of the war.

New owners purchased the property toward the end of the conflict and planned to return it to being a resort in the future.

But that would take time, so an agreement was reached with the State Department to lease the property at a rate of $3 per day for each detainee and $1.50 per day for each American, according to Barbeau's piece.

Oshima and his staff were captured when the war in the European theater ended. They were held at the Springs for about four months in 1945.

Government officials selected Bedford Springs to house the diplomatic prisoners due in part to its close proximity to Washington, D.C.

"At the time, it made sense to bring them here," Bedford County Historical Society Executive Director Gillian Leach said. "This was close (to Washington). It was kind of rural. It would be away from everyone, and the diplomats from Washington, D.C., could be here."

Resentment existed among some local residents, veterans and elected officials who knew that the prisoners were staying at the resort property with purported healing waters, while American POWs had been severely mistreated by the Japanese. Reports from the time indicate the prisoners were restricted from using the amenities at the resort, which was not in prime condition anyway.

"There were problems here, too," Leach said. "A lot of people from this area were not happy."

One Friday, around 2 p.m., the prisoners were taken away on seven buses and an ambulance, going to Cumberland, Md., on the first leg of their trips back to Japan.

"Peace settled over the Bedford Springs this week, and the strangest interlude in its long and colorful career as a resort hotel was at an end," reported the Bedford Gazette on Nov. 21, 1945.

The article continued: "Even as 189 Japanese prisoners of war interned there since August left the side gate on their homeward journey, workmen were readying the hotel for the winter months, preparing to close it until it reopens as a resort hotel again next summer under Shoreham management."

Members of the Japanese diplomatic corps were not the only World War II prisoners to be housed locally.

From late November 1944 until late February 1945, an estimated 90 German POWs were stationed at a camp in the Berkley Hills area near Johnstown, serving as laborers to assist with the construction of a $4 million shell-forging plant in West Taylor Township to be operated by Bethlehem Steel Corp.

"They weren't working with the munitions," said Shelby McHenry, a local genealogist and military historian. "They were building roads to go into the shell plant. It wasn't that they were working with the actual munitions. I don't think they would have been that obtuse."

The POWs temporarily came to the region from Indiantown Gap, a military training ground in Lebanon County where they were permanently held. They stayed on local property previously used for the National Youth Administration, a New Deal program that provided work and educational opportunities for teens and young adults during the Great Depression.

At least four contemporary articles were published in The Johnstown Tribune about the presence of the prison camp.

McHenry and Gary Kozak, a Johnstown resident and Air Force veteran, have independently been researching the history of the German POWs at Berkley Hills.

Kozak heard stories about the POW camp and started looking for newspaper articles and other materials. He recently submitted a request to the National Archives and Records Administration for documents about the camp.

"I just have this strong interest to search for more information on World War II and veterans," said Kozak, whose father was a medic on Utah Beach during the Normandy landings. "A lot of them are gone now, and you can't get information. I enjoy reading about World War II."