Daughter honors memory of her veteran dad, who lost a leg shooting famous photos of D-Day invasion in WWII 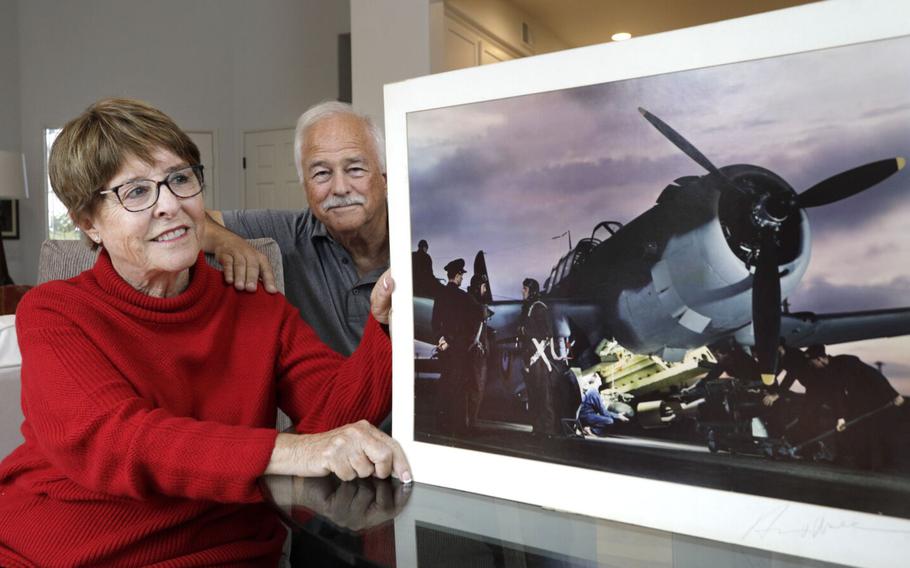 Military combat photographer Herman V. Wall captured some of the first and most famous photographs of the D-Day invasion on Normandy Beach during World War II, but that same day he lost a leg during the battle. Wall’s daughter Katherine Wall Panatone, far left, and her husband Steve Peck, center left, have co-written a book about her father’s heroics and the active working life he had after his injury called “Herman V Wall, Standing on One Leg.” Wall Panatone looks at her father’s photo of a Vultee Vengeance on an airfield in Britain, which was used in an advertisement by Vultee and won a major advertising award. (John Gastaldo, for The San Diego Union-Tribune/TNS)

CARLSBAD, Calif. (Tribune News Service) — Not long after Allied troops landed on Normandy's Omaha Beach during the D-Day invasion on June 6, 1944, the very first photographs from the French battlefield were widely published in American newspapers, magazines and journals.

Those images were taken by U.S. Army 165th Signal Corps Capt. Herman V. Wall, who was aboard one of the first landing crafts to reach the Easy Red Sector target zone amid a hail of bullets and deafening grenade and land mine blasts. Wall carried with him only his 35 mm Leica camera, a knapsack, a pistol and two canvas bags holding live carrier pigeons that he planned to send back to their home base with exposed rolls of film strapped to their bodies.

The carnage on the beach — where thousands of Allied troops died that day — was horrific, but Wall followed Army orders to keep dead bodies out of his photos. He snapped just 13 black-and-white images of the packed landing vehicles motoring toward land and exhausted soldiers wading ashore. Then, as he raised his camera for another shot, everything went black. When Wall regained consciousness, he realized his left leg had been blown off, but his camera — and the film that captured the earliest moments of a battle that turned the tide of World War II — were safe.

This vivid story opens the picture-filled book "Herman V Wall: Standing on One Leg," published by Wall's daughter, Kathy Wall Panatone, and her husband, Stephen Peck. Over the past year, the Carlsbad couple assembled the book by combing through thousands of photographs, negatives, documents and personal items she inherited from her dad, who died in 1997 at age 91 and is buried at Riverside National Cemetery.

Panatone, 71, said the book is a labor of love to her father, whose patriotism and bravery in the early-morning hours of D-Day inspired others in his company to forge ahead. But it's also a tribute to the man Wall became after the war. With the aid of a full leg prosthetic, he went on to a long, illustrious and adventurous career as a commercial photographer.

"He saw the worst on Omaha Beach, but he spent the rest of his life photographing beauty," Panatone said, adding that Wall used only the first initial of his middle name, Victor, with no period as his photographic signature.

In 1947, Wall shot the first color photos ever published in Time magazine. In the 1950s, he traveled through the Middle East photographing remote villages, historic sites and indigenous peoples for a library educational resources project. In 1964, Wall was named to Eastman Kodak's list of the top 10 photographers in America. In the 1960s and 1970s, he became nationally known for his commercial floral photography. And in 1974, he photographed a ranch's last cattle drive in the High Sierras.

In the 1970s, Wall also began volunteering with the Mutual Amputee Aid Fund, a peer-to-peer support group for people with limb loss.

"He stood tall and proved that even on one leg he could continue working as a photographer right up to the end of his life," said Peck, 74. "He stood proud his whole life."

Born in 1905 to German immigrant parents in Milwaukee, Wall moved with his family to Los Angeles in the 1920s and became a prolific amateur photographer. He was among the first class of students at the ArtCenter College of Design, where he later worked as an instructor alongside Ansel Adams and other famous photographers.

By October 1940, war was underway in Europe and Wall, then 35, signed up to join the Signal Corps, a communications branch of the Army, so he could use his photography skills to both record history and support European Allied forces. Fourteen months later, Pearl Harbor was attacked and the U.S. joined the fight.

During the war years, Wall photographed training exercises by the Army's 1st Cavalry Division at Fort Bliss, Texas, which was later sent to the Philippines province of Bataan, where all of the horses and many of the men died. While stationed at a military training base in Chipping Sodbury, England, Wall met Britain's Queen Mary in February 1944. Two months later, Wall's unit began secret training for D-Day.

When Wall awoke after the explosion, he found himself covered in the feathers of his dead carrier pigeons and his blast wounds partially sealed by his khaki pants, which became fused to his body from the heat of the blast. Although barely conscious, Wall clutched the roll of film in his hand all the way back to a medical ship. Army officials developed and disseminated the images to the American media in the following days.

In keeping with government policy, Wall's D-Day images were published only under the name of the U.S. Army Signal Corps. But in 1949, Wall was honored to receive a hand-inscribed copy of Gen. Dwight Eisenhower's war memoir "Crusade in Europe," in which the future president wrote a personal note saluting "the man whose gallantry on D-Day was outstanding on a field when gallantry was the rule."

Wall spent a year recuperating from his leg amputation and other severe shrapnel wounds at a medical hospital in Battle Creek, Mich. That's where he met his future wife, switchboard operator Ruth Hawks. They married in 1945 and resettled in Los Angeles where their only child, Katherine, was born in January 1951. After Ruth died in 2014, Panatone inherited all of her father's archives, but they were so voluminous she was overwhelmed at the thought of what to do with them.

Then on Jan. 12, 2021, Panatone met Peck on a blind date at a park bench in San Elijo Hills, near San Marcos. Like Panatone, he was widowed and they shared a common background as lifelong educators, avid readers, art lovers and travel aficionados. Peck is also a poet and published author, and said when he began exploring the boxes in Panatone's garage last year, he came up with the idea to write a book about this unsung hero.

"It was a no-brainer," Peck said. "She told the stories and I was the wordsmith."

As they worked together on the project, Panatone and Peck fell in love. On Oct. 10, they published their book and on Oct. 25, they got married. "Herman V Wall: Standing on One Leg" is available at barnesandnoble.com and on Amazon.com.

Panatone said her next goal is to find museums and universities interested in adding Wall's photos and negatives to their archives so that his contributions to American photography will be preserved and remembered.

"I thought my father was Superman. Isn't that what many little girls believe?" Panatone wrote in the book's introduction. "In the end, he was truly a super man, whose life and work will inspire anyone who reads his story."