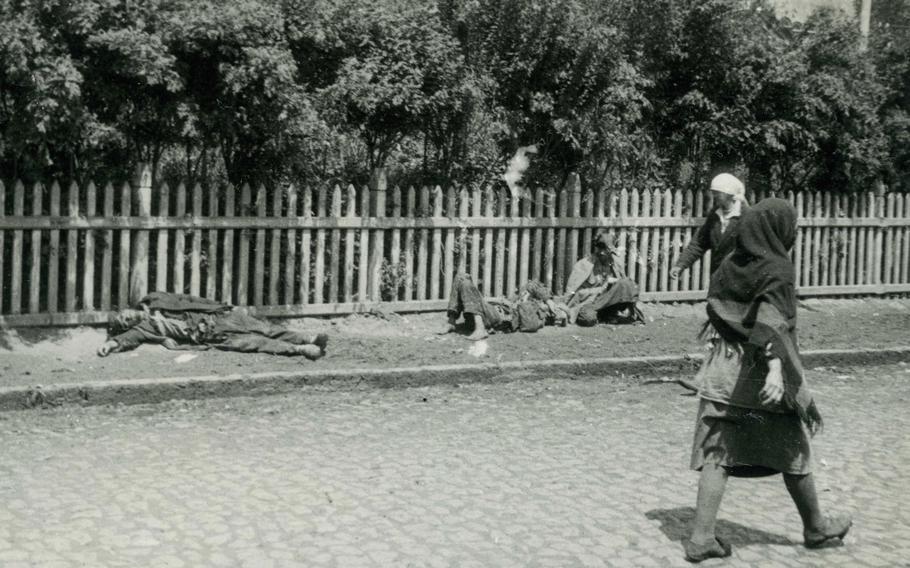 Bodies lie on a street in Kharkiv, Ukraine, in 1933, during the infamous Holodomor famine caused by Soviet policies that killed roughly 4 million people. (WikiMedia Commons/Diocesan Archive of Vienna/BA Innitzer)

The Belgian, Polish, Hungarian and Lithuanian prime ministers arrived in Kyiv on Saturday, offering a show of support as Ukraine prepares to commemorate those who died in the great famine of 1932-33, known as Holodomor. The famine, which was directly caused by Soviet policies, killed 4 million people and has been recognized by the European Parliament as a "crime against humanity." Ukrainian officials have drawn direct parallels between the famine of the 1930s and Russia's attempts to destroy Ukraine's identity.

The visiting European leaders attended a food security summit in Kyiv, appearing alongside Ukrainian President Volodymyr Zelensky. NATO Secretary General Jens Stoltenberg also addressed the "Grain from Ukraine" summit on Saturday, accusing Russia of "using hunger as a weapon of war against Ukraine" and drawing parallels with the Holodomor famine.

Ukrainian officials drew on the 90th anniversary of Holodomor to rally their citizens against Russian troops. "The Holodomor of 1932-1933 was a genocide of the Ukrainian people," presidential official Andriy Yermak wrote on Twitter. "Now, 90 years later, Russia unleashed a full-scale war against us and wants to organize Holodomor 2.0. But this time not in Ukraine alone, but also in the world," he said, as the country's Defense Ministry condemned Russia's "theft and destruction" of Ukrainian grain and its impact on global food supplies. 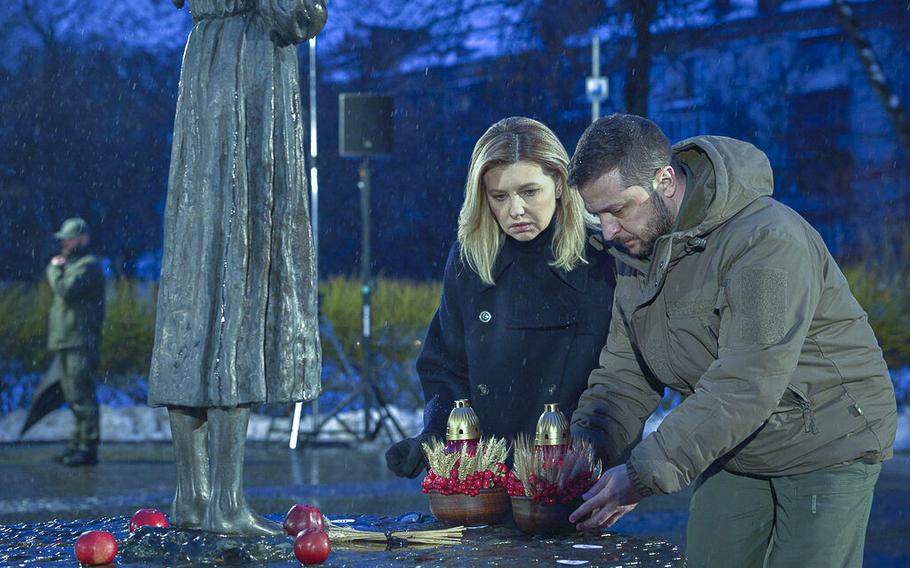 Ukrainian President Volodymyr Zelenskyy and his wife Olena pay tribute in Kyiv, Ukraine, on Saturday, Nov. 26, 2022, at a monument to victims of the Holodomor, Great Famine, which took place in the 1930’s and that killed millions. (Ukrainian Presidential Press Office )

In other developments, electricity has been restored to the southern city of Kherson, a senior Ukrainian official said Saturday, thanking the emergency workers who had reconnected the supply in the city that was liberated just two weeks ago. The city is still coming under Russian strikes, which led several hospitals to evacuate patients on Friday, the authorities said.

Six million Ukrainians are still suffering from blackouts, Ukrainian President Volodymyr Zelensky said in his nightly address. In the capital alone, around 130,000 residents remain without electricity, the city's military administration said early Saturday, following supply issues and power cuts caused by Russian strikes on energy infrastructure earlier in the week. Zelensky has made a rare criticism of the city's mayor, whom he accused of doing a poor job setting up winter emergency shelters.

Latest on the war and its ripple effects across the globe

• The Lithuanian and Polish leaders signed an agreement with their Ukrainian counterpart stressing their support for Kyiv, including in its bid to join the European Union and NATO. The Baltic countries, who are historically wary of Russia, have long been among Ukraine's staunchest allies.

• Russia is probably using older cruise missiles stripped of their nuclear warheads, Britain's Defense Ministry said Saturday, in an attempt to divert Ukraine's air defenses. "Whatever Russia's intent, this improvisation highlights the level of depletion in Russia's stock of long-range missiles," the ministry said in its daily update.

• NATO forces drilled in the Suwalki Gap, a tiny stretch of land along the Polish-Lithuanian border that is seen as a point of vulnerability for the alliance in event of a Russian attack. The troops are practicing crossing water and landing, according to Reuters. "We saw that the soldiers work well together. They are prepared to take responsibility for the security of our homeland and the entire eastern flank of NATO," said Polish Defense Minister Mariusz Blaszczak.

• Russia attacked the suburbs of Zaporizhzhia city, with rockets hitting a hospital and service station, Oleksandr Starukh, head of the regional military administration, said Friday on Telegram. No casualties were reported after Friday's strikes.

• European talks to agree to a price cap on Russian oil have been delayed until next week, after nations failed to reach an agreement on measures to put further pressure on Moscow's ability to fund the war in Ukraine. European Union member states have been divided over a proposed limit, which is due to come into effect on Dec. 5, with plans of $65 to $70 per barrel seen as too high by some and too low by others.

• France and Germany promised support to prevent either country from facing an energy crisis due to the war in Ukraine. Under the agreement signed Friday, Germany will give France electricity while France will provide natural gas in return. "France and Germany need each other to overcome energy tensions," French Prime Minister Elisabeth Borne wrote on Twitter.

• Pope Francis praised the "noble and martyred people" of Ukraine in a letter addressed to Ukrainians nine months after the start of the war. The pope condemned "the absurd madness of war" and compared Ukrainians' suffering to that of Jesus on the cross. "The cross that tortured the Lord lives again in the tortures found on the bodies, in the mass graves uncovered in various cities, in those and so many other bloody images that have entered our souls, that make us cry out: why? How can men treat other men this way?" the pontiff wrote, according to Vatican News.