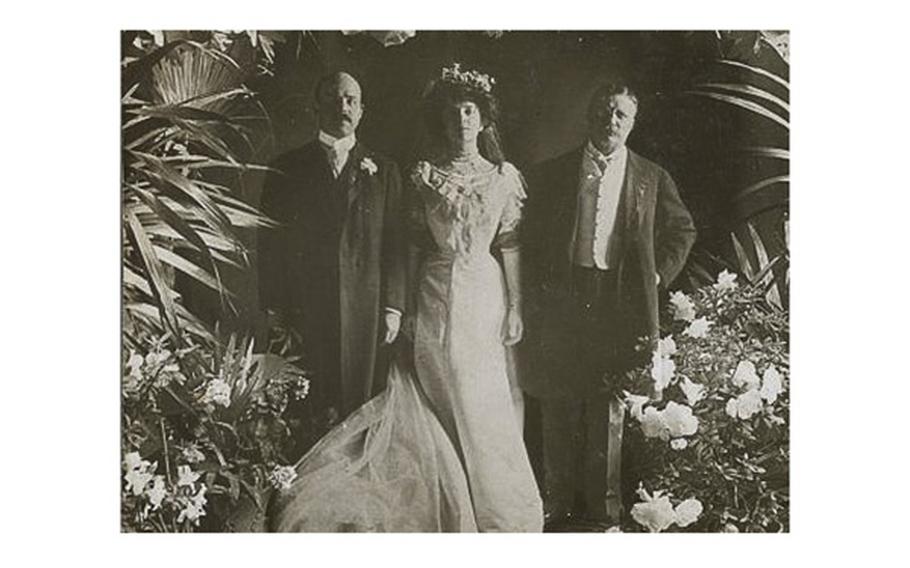 At her White House wedding in 1906, Alice Lee Roosevelt, the lively daughter of Republican President Theodore Roosevelt, grabbed a military guard's sword and sliced her wedding cake in half. "Let somebody else do the rest," she said with a laugh.

On Nov. 19, President Biden's eldest granddaughter will be married in the 19th White House wedding. The nuptials of Naomi Biden and Peter Neal on the South Lawn will probably be less raucous than the early-20th-century matching of "Princess Alice" and Rep. Nicholas Longworth (R-Ohio).

The high-spirited Alice was a handful when Roosevelt, the vice president, moved into the White House in 1901 after President William McKinley was assassinated. "I can do one of two things," Roosevelt told a visitor. "I can be president of the United States, or I can control Alice. I cannot possibly do both!"

Alice loved to ride in fast cars, ride fast horses - and bet on racehorses with bookies - and sneak a smoke on the White House roof. She carried a pet garter snake named Emily Spinach in her purse. In 1903, she rode in a submarine in Narragansett Bay, two years before her father became the first president to go underwater in a sub.

She is "more than a fair portrait and landscape painter . . . speaks several languages" and "is fond of poetry, favoring Keats and Shelly," a columnist wrote in 1905. The columnist said that a member of the snooty Knickerbocker Club in New York "after seeing the zest with which she danced, remarked in his languid way, 'Bah, Jove! She is a chip off the old block.' "

Alice became a worldwide celebrity. In 1905, Roosevelt sent his daughter on a diplomatic voyage to the Far East with War Secretary William Howard Taft. The congressional delegation included Longworth, a wealthy playboy. He and Alice began a romance at sea. "One morning Congressman Longworth, Miss Alice's devoted slave, presented himself attired in white flannels," the New York World reported. Alice dared him to jump into the ship's pool, then dived in herself, fully clothed. "What could poor Longworth do, flannels and all but gallantly follow the President's daughter?" the paper recorded.

Alice later wrote that Longworth wasn't the man in flannels, but in any case, that December, she and Longworth announced their engagement. Their wedding was set for Feb. 17, five days after Alice's 22nd birthday. Longworth was 36. It would be the first White House wedding since 1874, when President Ulysses S. Grant's daughter Nellie married Algernon Charles Frederick Sartoris, a prominent Englishman.

Washington was abuzz as the wedding neared. "This is 'Alice Roosevelt week,' " the National Tribune reported. "Nobody in this town who pretends to be anybody is going to think of anything else but going to the White House wedding. Not since pretty Nellie Grant married her foreign lover against her father's wishes in the big East Room of the White House has there been as much interest manifested in a wedding in the United States."

At noon, Alice, wearing a long white satin dress, marched up the aisle in the East Room on the arm of President Roosevelt. After vows were exchanged, the bride "tripped down from the altar like a school girl, and in the exuberance of her mood almost danced her way through the assemblage of nearly a thousand admiring men and women," reported The Washington Post, which devoted its entire front page to the wedding.

"Alice adorned herself with the pearl necklace from the Cuban government, a diamond broach from her parents, the kaiser's diamond bracelets, and Nick's wedding present to her, a diamond and pearl necklace," Stacy A. Cordery wrote in her book, "Alice."

The bride and groom retreated to the Blue Room for a private lunch with friends. When the big wedding cake was served, Alice exclaimed to the military guard, "Your sword, Major, your sword." Drawing his sword, the guard "grasped the blade and thrust the pearl mounted hilt in the bride's direction," the Hartford Courant reported. "Without any hesitation, she took the weapon firm in her right hand and with one sharp thrust of the point into the centre of the cake cut deep into it. Then deftly drawing the sword hilt downward, she divided it."

About 4 p.m., the newlyweds and some friends slipped out of a window in the Red Room to avoid the waiting crowd. A limousine was waiting to whisk the couple to the nearby estate of Washington Post Publisher John R. McLean. "Showers of rice" were thrown by "the jolly young people who had been skylarking the afternoon away in the White House," the New York Times reported.

Most of the public loved the wedding. But a Chicago pastor called it "a vain display of would-be royalty. . . . 'Princess Alice,' who is nothing more nor less than a plain American girl, outdid any of the efforts of Queen Victoria."

The marriage soon became strained. Longworth continued his womanizing. Once, a fellow congressman ran his hand over Longworth's bald head and said, "Nice and smooth. Feels just like my wife's bottom." Longworth felt his own head and replied, "Yes, so it does."

Alice also had affairs. In 1925, at age 41, she gave birth to a daughter, Paulina. The father was married Sen. William Borah (R-Idaho), Alice wrote in her private diary. Longworth doted on Paulina until his death in 1931 at age 61. He had become a popular House speaker, and in 1962, a House office building was named after him.

"Mrs. L." became known for her tart tongue. After telling bawdy jokes about President Woodrow Wilson, she was banned from the White House. She called President Warren G. Harding "just a slob." She said "the Hoover vacuum is more exciting" than President Herbert Hoover but supported him against cousin Franklin D. Roosevelt in the 1932 presidential election. Still, Alice often visited the White House during FDR's four terms. According to the syndicated column Capital Stuff, she once said Roosevelt was "one part mush and two parts Eleanor."

She liked Democratic presidents Harry S. Truman and John F. Kennedy and reportedly voted for Lyndon B. Johnson, but her favorite was Republican Richard M. Nixon, who hosted her 87th birthday party at the White House. In 1971, she attended the White House wedding of Tricia Nixon and Edward Finch Cox.

Mrs. L. never remarried. She presided over Washington society from her home on Embassy Row and became known as the capital's "other Washington Monument." A pillow in her sitting room was embroidered with a saying she popularized: "If you haven't got anything nice to say about anyone, come and sit here by me."

In 1974, she told The Post, "I don't think I am insensitive or cruel. I laugh, I have a sense of humor, I like to tease. I must admit a sense of mischief does get hold of me from time to time. . . . Isn't it strange how that upsets people?"

Alice Roosevelt Longworth died Feb. 20, 1980, at age 96. United Press International noted that her wedding nearly seven decades before was "one of the prime social events of the century's first decade."

Ronald G. Shafer is the author of "Breaking News All Over Again," a collection of his Washington Post Retropolis columns.