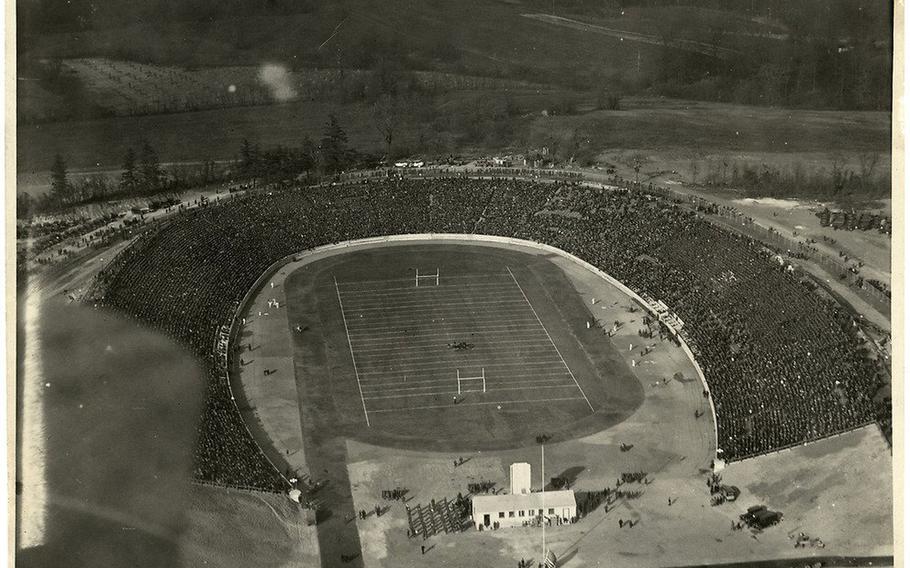 (Tribune News Service) — The stadium is gone now; the football game, long forgotten. But a century ago, much of Baltimore turned out to celebrate a contest that would change the city’s face forever.

On Dec. 2, 1922, more than 43,000 people poured into Municipal Stadium on 33rd Street to christen the new ballpark in a battle between the Third Army Corps and the Quantico (Virginia) Marines. No crowd that size had ever witnessed a sporting event here, and city officials went all-out to make it so. Invitations went to President Warren G. Harding, every member of Congress and the entire Supreme Court. Fancy banquets kicked off the day, followed by a gala parade led by 10,000 servicemen, the Marines’ 225-piece band, Army tanks and planes flying overhead in battle formation.

So what if the game was a wannabe of the annual Army-Navy spectacle? Reporters streamed in from all over the East to cover the gridiron clash between the active-duty soldiers and Marines. The former was a hand-picked team from Army posts in the area; the Marines all hailed from Quantico. Dubbed the “Devil Dogs,” the Marines, like the Army, featured former college stars on a squad that would play an open football schedule (including against college teams) until 1972.

In the wake of World War I, both sides were primed. They’d met in 1921, at Johns Hopkins University’s Homewood Field, where the Marines won, 20-0, over an Army team coached by Major Dwight D. Eisenhower. The Doughboys sought revenge.

“Army generals will watch the game as closely as they watched the movements of the Germans at The Argonne [in France],” The Sun reported.

During the pregame parade, from Baltimore’s Washington Monument to the stadium, planes dropped 30,000 leaflets that read “Rah for the Army.”

Army practiced at Fort Howard, in North Point. The Marines held secret workouts at their base where, each night for a week, entire brigades gathered in the gym to sharpen their cheers and scream themselves silly. 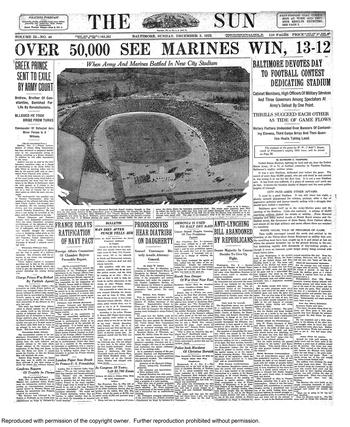 Each team had its hero. Army’s was Gene Vidal, 27, onetime Olympic decathlete and former team captain at West Point. Vidal was a shifty broken-field runner with a booming leg who once dropkicked a 45-yard field goal. The Marines had Frank Goettge, 26, a hardscrabble fullback and World War I veteran who turned down a professional football offer to remain a Marine.

As game day neared, workers rushed to finish the stadium, nailing the last wooden seat into place the day before. A dry spell led worried groundskeepers to water the newly sodded field every hour. Missing, in the end, were water fountains for people in the crowd, who had to go without.

Who attended? The secretary of the Navy, about 100 congressmen and the governors of three states, including Albert Ritchie of Maryland. Outside the gates, nearly 10,000 fans watched from nearby embankments. Right up to kickoff, Army intelligence officers prowled the streets in an effort to nab scalpers peddling the $2 and $1.50 tickets for profit.

A 21-gun salute blessed the ballpark, and the game was on. Army jumped to a 6-0 lead on two field goals by Vidal, one a 40-yarder, but the Devil Dogs stormed back with two touchdowns as Goettge — whom The Sun described as “an embodied tornado” — ran for one score and threw for another. He also intercepted a pass as the Marines held on to win, 13-12.

The teams wouldn’t play here again. In 1923, contract squabbles moved the game to Washington, D.C. But its success in Baltimore would bring the traditional Army-Navy game to Municipal Stadium in 1924. Thirty years later, reconstruction transformed the park into Memorial Stadium, home of the Colts, Orioles and other sporting events until its demolition in 2001.

What of the stars of that baptismal game? Vidal became an aviation pioneer; his son Gore, a noted author. Goettge remained a Marine, rising to lieutenant colonel and serving as an intelligence officer during World War II until he was killed on Guadalcanal in 1942.