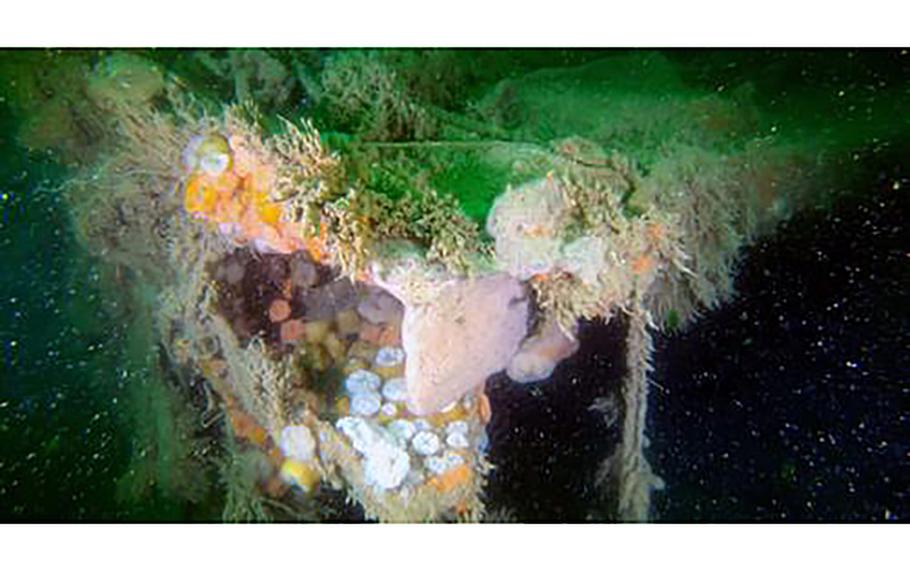 Marine growth is seen on some of the deck remains of the V 1302 John Mahn which sunk during World War II after it was damaged during a bomb attack. (Facebook/Frontiers in Marine Science/Flanders Marine Institute/VLIZ)

For 80 years, the wreck of the Vorpostenboot V-1302 John Mahn, a fishing vessel turned German naval patrol boat that sank in 1942, has rested on the floor of the North Sea, a silent feature of the underwater landscape.

But the World War II wreck's placid appearance was deceiving. When a team of Belgian researchers studied the sediment surrounding the John Mahn and the microbes that have made the wreckage their home, they found modern-day hazards - hazards that may also be present in other such wrecks.

Today, the John Mahn is leaching toxic chemicals, including heavy metals, arsenic and TNT, into the seafloor, according to an analysis published in Frontiers in Marine Science. The steam trawler, which sank after a strike by British Royal Air Force bombers, went down with its weapons and coal reserves.

Among the chemicals still seeping from the wreck is polycyclic aromatic hydrocarbon (PAH), which can be carcinogenic. On land, humans can be exposed to PAH from pollutants such as cigarette smoke and car exhaust. In the ocean, the researchers write, the chemicals affect soil and wildlife - and the chemicals can take decades to degrade.

Although its brief stint as a military vessel is long past, the sunken ship plays host to its own microbiome today. The biofilm on the ship itself is full of "corroders," the researchers write. Some of the bacteria and algae clinging to the ship feed on the pollutants; others are busily eroding the John Mahn's steel hull, possibly releasing even more contamination in the process.

"While wrecks can function as artificial reefs and have tremendous human storytelling value, we should not forget that they can be dangerous, human-made objects which were unintentionally introduced into a natural environment," Josefien Van Landuyt of Ghent University, a PhD student who led the study, said in a news release. ". . . People often forget that below the surface, we, humans, have already made quite an impact."

Despite the risks, the researchers say, the precise locations of thousands of such wrecks - and the hazardous substances they took down with them - are still unknown.