What was the first ever scheduled flight into Fort Worth? Hint: It wasn’t an airplane 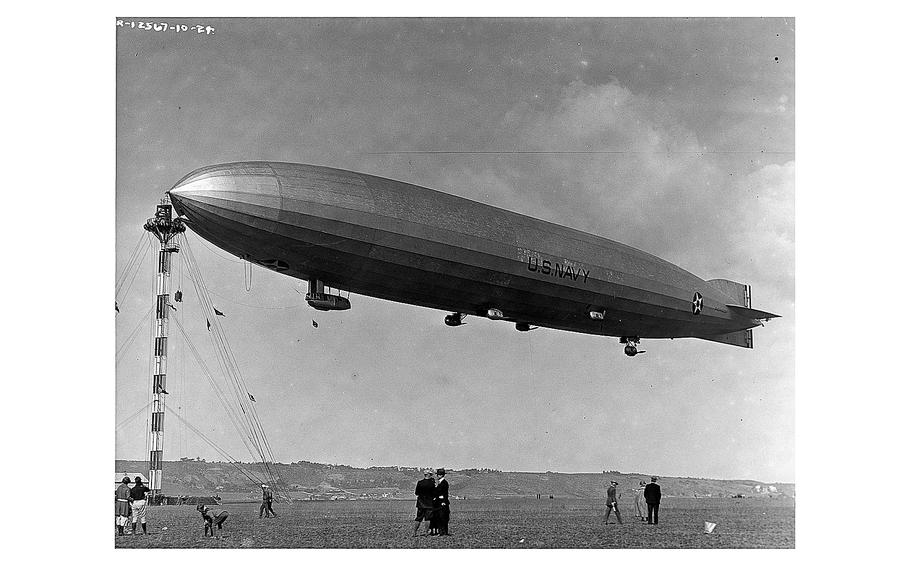 (Tribune News Service) — In October 1924, the United States had two dirigibles, the Shenandoah and the Los Angeles.

The Shenandoah was American-built, based on a design of Germany’s Zeppelin Co. Buoyancy came from 2.1 million cubic feet of helium. It was 680 feet long, powered by five Packard engines. Its maiden flight was Aug, 20, 1923. There was no possibility anyone would mistake it for one of the German zeppelins because written on the side in huge letters was “U.S. Navy.”

The Shenandoah was the U.S. Navy’s baby, the first of four, whose mission would be reconnaissance flights over the broad expanse of the Pacific watching for a Japanese battle fleet, a major concern even at this early date. But first, to generate public support, the Navy sent the Shenandoah on a cross-country flight in October 1924, covering 9,000 miles in the air.

The journey had to be carefully planned because there were only four mooring masts for dirigibles in the United States, and Fort Worth had the only helium producing plant. The dirigible’s cramped gondola was not exactly made for long-distance travel. It held a navigation bridge, radio room, and 12 square feet of crew quarters. On this 20-day journey, the crew would consist of 11 officers, 27 enlisted men, and two passengers.

Living conditions would be a severe challenge for everyone on board. Officers and crew would share the same quarters, with half sleeping in hammocks while half were on duty at any given time. Cooking was done on a small hot plate, there was no bathing, and the toilet was a chamber pot emptied over the side after use.

The journey started at Lakehurst, New Jersey, on Oct. 7 with the Shenandoah casting off from the mooring mast at 10:00 a.m. The first stop would be Fort Worth, where it would replace the helium that had leaked out or been bled off during its journey. Then it would be on to San Diego and Camp Lewis, Washington, before returning home. Since the Shenandoah could only land where there was a mooring mast, its majestic passage would only be seen from the ground by people craning their necks as it passed high overhead.

The Shenandoah’s historic journey would be an expensive venture for Uncle Sam, costing tens of thousands of dollars. Helium was a rare gas that cost an exorbitant $55 to $60 per 1,000 cubic feet to produce. Hydrogen gas, used by the Germans, cost only one-tenth of that amount and was much more buoyant. However, it was also highly flammable if not handled properly.

The Shenandoah reached Fort Worth on Oct. 8 and tied up to the mooring mast at Helium Production Plant No. 1 to replenish its gas cells before proceeding westward. The plant sat on 23 acres in North Fort Worth surrounded by cotton fields. It could only be reached by driving up an unpaved Blue Mound Road. Fort Worth had the nation’s only helium-producing plant thanks to the influence of Fort Worth Congressman Fritz Lanham, dubbed “the Father of Fort Worth’s helium plant.”

The Fort Worth Star-Telegram was the nation’s only newspaper reporting regularly on the journey. That was because publisher Amon Carter had secured a secret agreement with the Navy to put his man, Junius B. Wood, aboard as one of the two passengers. This is also why Carter’s WBAP radio station was able to alert the city to the approaching ship on Oct. 8. Carter’s scoop represented the beginning of the modern era of negotiating exclusive media rights for major events. Wood continued to send reports via mail bags dropped from the ship all the way to the West Coast and back to Fort Worth.

The Shenandoah landed in Fort Worth at 7 p.m., ahead of schedule thanks to a tail wind that had pushed it along at what the Star-Telegram called “the terrific speed” of 75 mph. The 165-foot mooring mast was ready to receive its first airship, and the city turned out in force to give the Shenandoah the biggest civic welcome since President Theodore Roosevelt in 1905. Thirty minutes before it descended every railroad shop and factory in the city began blowing its steam whistle. A reception committee composed of city and federal officials waited at the landing field along with an honor guard of 150 National Guardsmen, Boy Scouts, and motorcycle officers, all in uniform. As the ship neared the mast, it dropped lines that were grabbed by the ground crew and hauled over to a mechanical winch that hauled it in close enough to be secured.

Getting passengers from the Shenandoah to the ground was even trickier as it could only be accomplished by riding in a basket over a line between the gondola and the masthead or lowering a hand-cranked ladder from the gondola to the ground. The senior officers and two passengers were guests of honor at a special banquet that night at the Hotel Texas. Meanwhile, the crew worked in shifts loading helium, water, and supplies. All supplies, including fuel for the engines, had to be laboriously hauled up on ropes. The ship took on helium and water (used as ballast) through lines attached to the mooring mast and snaking to the ground.

The Shenandoah left Fort Worth on the second leg of its journey at 9:46 a.m. Thursday morning, 46 minutes late due to “heavy air.” The extra time allowed an enterprising cotton farmer whose land was adjacent to the landing field to admit gawkers willing to pay a quarter (children admitted free) for the privilege of seeing things up close. Before resuming its journey, the Shenandoah bid farewell to Fort Worth by sailing serenely over the city at 1,500 feet toward the Near South Side before turning west to disappear over the horizon. People filled the streets and rooftops to see the ship off.

Forty hours after leaving Fort Worth, the Shenandoah reached San Diego, and after a brief stop there turned north following the coast up to Camp Lewis. After a brief stop there it headed home. The return trip from San Diego began at 11:13 am on Wednesday, Oct. 22. The ship arrived at Fort Worth for more helium before dawn on Friday, Sept. 24, guided in by a powerful searchlight and “flood beacons.” Because of the early hour and the coldest temperature of the year, only a small crowd turned out to greet them. The ship took on another 180,000 cubic feet of helium, and while that was being done, most of the crew were whisked to the Hotel Texas for a sumptuous breakfast. They were back on board and casting off the lines at 10:38 am, rising majestically into the air and passing over the city one last time.

The Shenandoah came down safely at Lakehurst on Oct. 24. Total time in the air was 235 hours. Newspapers continued to carry breathless reports for days thereafter, predicting that dirigibles were the future of commercial aviation. The Navy played down the fact that this little jaunt had used up 12% of the entire helium supply of the United States.

The list of historic firsts of this flight is lengthy. This was the first scheduled flight by any type of aircraft into Fort Worth. One local historian calls it “the key event in making Fort Worth a modern city.” In a few short years, aircraft would be making regular stops at Meacham Field, but they wouldn’t be lighter-than-air ships.

The fate of the Shenandoah is a sad ending to the story. It broke up in mid-air over Ohio and crashed on Sept. 2, 1925. Seven crewmen were killed. One of the few survivors was the radioman Charles E. Rosendahl, a Cleburne resident.

Author-historian Richard Selcer is a Fort Worth native and proud graduate of Paschal High and TCU.