Submarine veterans from WWII are gone. Now a memorial to them is gone, too. 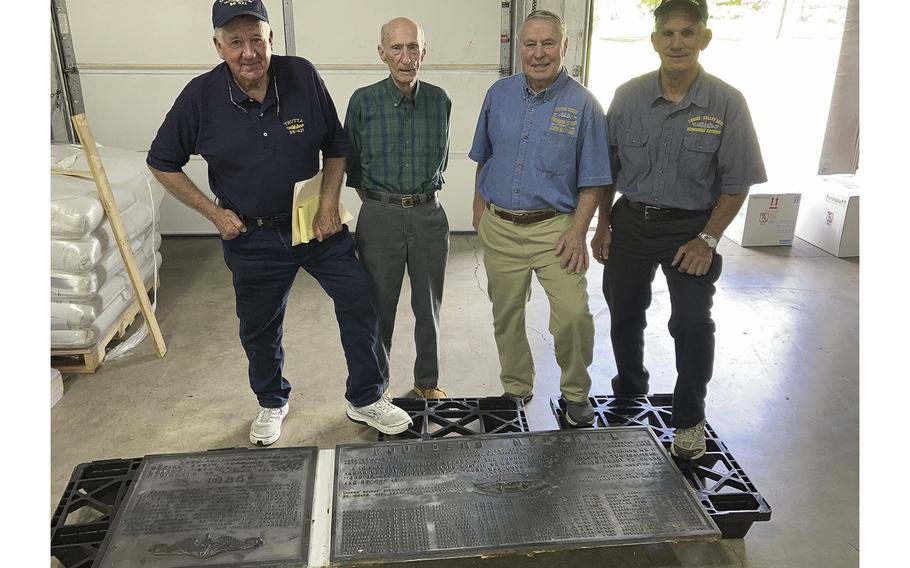 (Tribune News Service) — Submarine crews from World War II were honored with a memorial at the Naval Reserve center near Lehigh Valley International Airport in 1985.

Hundreds of people attended the dedication, including local submarine veterans.

Today, there are few submarine veterans left from that war. And their memorial is gone now, too.

The reserve center, on Postal Road in Hanover Township, Lehigh County, is closing as the Naval Reserve consolidates operations. As it winds down, the center is removing government property — including the 21-foot-long, 2,700-pound torpedo that was the centerpiece of the monument.

The torpedo has been put on a crate to be shipped out, destination unknown.

Two plaques that were part of the memorial were given to members of a local submarine veterans organization, the Lehigh Valley chapter of U.S. Submarine Veterans Inc.

They have asked for the torpedo, too. Their intention is to find a suitable place to rebuild the memorial. So far, their request has been denied.

“Nowadays, they should be putting memorials up, not taking them down,” said Bill Reightler of Catasauqua, who served from 1951 to 1955 on the USS Blackfin, which earned three battle stars for its operations during World War II.

Reightler and other local submarine veterans believe the torpedo is owned by the residents of the Lehigh Valley. They say the Navy has no right to send it elsewhere.

They point to language on one of the plaques that was with the torpedo. A torpedo at the Naval Reserve Center in Hanover Township, Lehigh County, that previously was the centerpiece of a monument to World War II submarine veterans. (Rick Kintzel/TNS)

It says: “Mark 14 torpedo, Model 3A, Serial 92516, donated by the United States Navy to the residents of Lehigh Valley, Pa.”

The plaque says the torpedo was “presented to the citizens of the Lehigh Valley in memory of its servicemen who gallantly gave their lives for the cause of freedom.”

“I’m saying we own the damn torpedo,” Reightler said. “The Navy don’t own it. They gave it away.”

That sounds logical, based on the language on the plaque. It hasn’t been easy determining who owns the torpedo.

Cmdr. Jeff Gray of the Naval Reserve Great Lakes Readiness Command near Chicago said that while the plaque says the torpedo was “donated” by the Navy to the residents of the Lehigh Valley, it is government property.

“They don’t give government property away,” he said.

The Navy loans items, classified as artifacts, to qualifying organizations, Gray said. But “the Navy still owns the property.”

He said it would be up to the Naval History and Heritage Command, which manages artifacts, to determine what happens with the torpedo.

The History and Heritage Command said it does not own the torpedo, and referred questions about it to the Naval Reserve.

Gray said on Oct. 10 that officials were reviewing the matter. 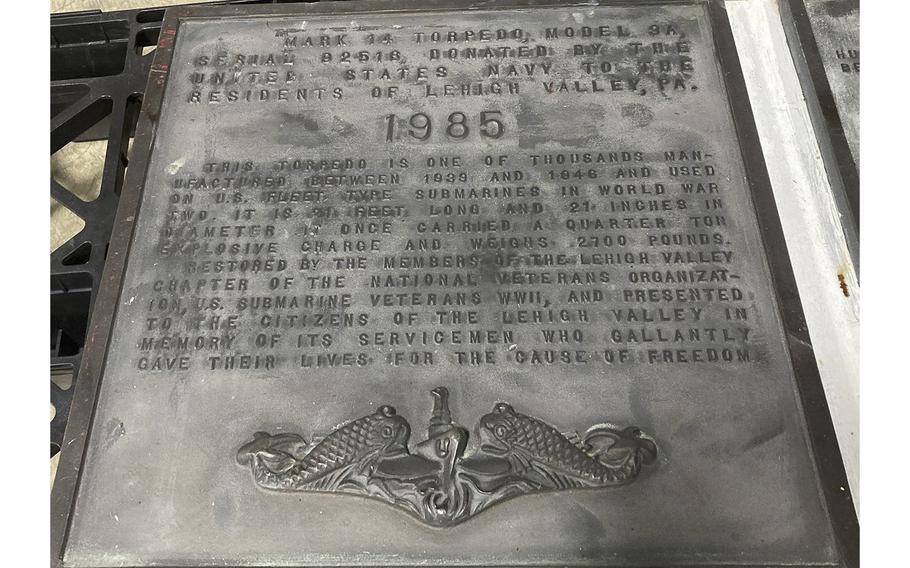 A plaque that was part of a memorial to World War II submarine veterans at the Naval Reserve cener near Lehigh Valley International Airport. ()

The plaque with the torpedo says it was restored by members of the Lehigh Valley chapter of the U.S. Submarine Veterans of World War II. The congressionally chartered organization disbanded its national chapter in 2014 amid dwindling membership; only about 1% of the 16 million Americans who served in the war are still alive.

The other plaque that was at the former memorial lists the submarines that were lost during World War II, and the number of crew who went down with them. Altogether, 3,505 service members died on 52 subs.

A local World War II submarine veteran of 36 years, Martin Schaffer of Allentown, was the driving force to build the memorial at the Naval Reserve center.

He became master chief of the center and then president of the Lehigh Valley chapter of U.S. Submarine Veterans of World War II.

Schaffer, who passed away in 2002, likely obtained the torpedo from a connection in the Navy, said his grandson, John Graver, who served in the Navy and now is an Air Force colonel in Colorado.

Graver said he suspects that is the origin of the torpedo because that’s how his grandfather obtained another torpedo for another memorial to a submarine lost at sea, the USS Wahoo, in Williamsport.

An article in The Parkland Press in 1997 explains how Schaffer got that torpedo from a Navy chief in Norfolk.

After retiring from the Navy Reserves and Bethlehem Steel in 1980, Schaffer dedicated a lot of time to ensuring submarine veterans were not forgotten. He even helped to get a memorial for the USS Wahoo built in Japan in 1995.

At the request of the younger brother of a sailor lost on the Wahoo, Schaffer traveled to Japan to learn as much as he could about the sinking of the submarine near that country’s coast in 1943. All 80 crew members perished. Schaffer met and befriended a Japanese pilot, sailor and shore artilleryman who had fired on the submarine during the battle.

“That was a big deal to be able to connect the dots for all the families, providing closure and a memorial to their sons’ dedication to the nation,” Graver told me. “Everything Martin Schaffer did to memorialize the submariners lost at sea in World War II was through kindness and reuniting people.”

Graver said he hopes the Navy will agree to leave the torpedo in the Lehigh Valley so it can be restored to its intended use as a tribute.

He said he shared that information with Cmdr. Gray at the Naval Reserve Great Lakes Readiness Command.

He said he was told that if the local U.S. Submarine Veterans Inc. wants the torpedo, it will have to apply for it to be loaned through the artifacts program at Naval History and Heritage Command.

“The good news is the Navy wants artifacts to be out there and seen by the public to tell the Navy story,” Graver said.

U.S. Submarine Veterans Inc., which is open to all submarine veterans, is now the predominant organization for honoring submarine history. As of last year, it had more than 11,000 members in more than 165 chapters.

Members of the local organization have lobbied Congresswoman Susan Wild to help keep the torpedo in the Lehigh Valley.

“Our organization would like to take possession of it for a future memorial to be determined at a later date in Lehigh County,” wrote Dal Maso, who served on the USS Trutta from 1961 to 1964.

“There’s no good reason it should go elsewhere,” she told me.

This dilemma shouldn’t be difficult to solve. The Navy should work with the local veterans group to keep the torpedo in the Lehigh Valley. And the local group should commit to properly maintaining and displaying it.