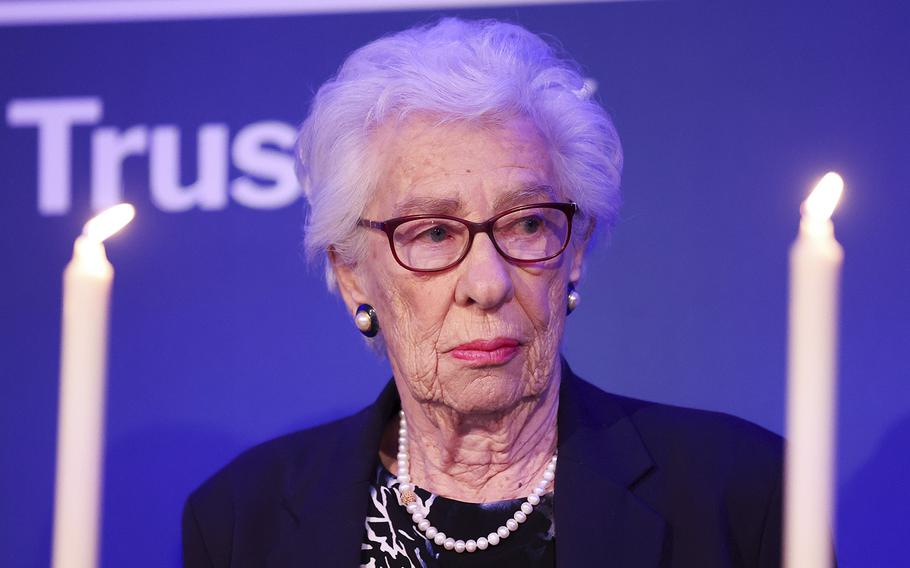 DALLAS (Tribune News Service) — Eva Schloss is no stranger to Dallas. As a Holocaust survivor willing to share her harrowing life story, she appeared in Richardson as recently as three years ago. In 2002, she flew in from London to see a play about her life, "And Then They Came for Me," which was showcased at Dallas Children's Theater.

Earlier this year, she became one of the newest holographic images in the $2.5 million Dimensions in Testimony Theater at the Dallas Holocaust and Human Rights Museum. And now, the world will learn about Schloss as part of Ken Burns' latest documentary series.

Co-directed by fellow filmmakers Lynn Novick and Sarah Botstein, "The U.S. and the Holocaust" debuts on PBS at 8 p.m. ET Sunday. Episodes two and three resume at the same time on Tuesday and Wednesday.

Born in Vienna in 1929 as Eva Geiringer (the name used in the series), Schloss suffered the loss of her brother and father, both of whom were killed at Auschwitz. In 1953, Schloss' mother married Otto Frank, Anne Frank's father, making Eva the late Anne's stepsister.

Schloss (nee Geiringer) is among the survivors who add depth and gravitas to a series that somehow manages to find a fresh angle in telling the story of the Holocaust — the role America played in shaping a tragedy in which 6 million Jews were murdered by Nazi Germany.

The series focuses extensively on American immigration policies leading up to World War II and how antisemitism — spread by many, with aviation hero Charles Lindbergh among its loudest practitioners — narrowed the options for refugees hoping to escape the threat in Europe.

Yes, America was a refuge for Jews seeking to flee the tyranny of Adolf Hitler. But only if you could enter, which the government made it next to impossible to do. Among those denied entry was the family of Anne Frank.

As Holocaust survivor Guy Stern says in the film: "The golden door was not wide open."

"When we decided to make the film, we all looked at each other and gulped," Botstein says in an interview with The Dallas Morning News. "We had some worry about taking on a topic which has been explored in many films and many books. People sometimes say to us, 'I've seen everything, I know everything. I don't want to see another film about the Holocaust.'

"We really want to lean on our title — "The U.S. and the Holocaust." So, we're looking at the events of what happened to the Jews of Europe and the Holocaust through the lens of the American experience — the political experience, the social experience, what ordinary people did, what our politicians did in trying to understand why we did and did not act the ways that we did, as this history was unfolding."

What the film shows dramatically is that "Americans can no longer hide behind the notion" as Botstein says, "that we didn't know it was happening."

Novick notes that "we're making this film at a time when we are as Americans trying to reckon with our own history, in many different ways. And that's a relatively new, overdue phenomenon."

She adds that "white supremacist ideology was very popular in the United States" before and after Hitler's rise to dominance, "and that is hard to look at. That had an influence over Nazi ideas, Hitler's ideas, and they also studied our Jim Crow infrastructure and used that as a model for how they would begin to effect second-class citizenship for their Jewish citizens and to chip away at their rights.

"None of those things mean that we were in any way responsible for the Holocaust. But it means that there's an interchange of ideas and ideology that we as Americans have to answer for."