The presidents who hated their presidential portraits

The Washington Post • September 7, 2022
This story has been corrected. 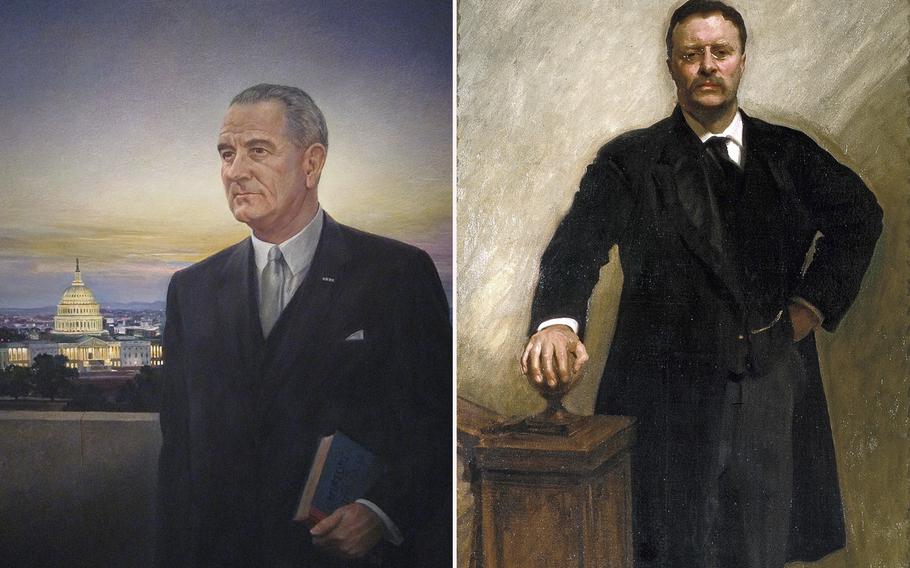 President Theodore Roosevelt griped that his made him look like "a mewing cat." President Lyndon B. Johnson called his "the ugliest thing I ever saw." President Ronald Reagan ordered a do-over.

All of the presidents were complaining about their official White House portraits, which are a long-standing tradition. Or they were until President Donald Trump ended the practice of sitting presidents unveiling the official portraits of their predecessors — nearly uninterrupted for four decades — by not holding a ceremony for former president Barack Obama.

Trump has never explained why he skipped the portrait ritual. But on Wednesday, President Biden, who served as Obama's vice president, will resume the tradition by unveiling the official portraits of the nation's first Black president and former first lady Michelle Obama at the White House.

The unveiling ceremonies, which began in 1978, are traditionally "bipartisan events with warm greetings and collegial speeches exchanged by the president and their predecessor," according to the White House Historical Association. The nonprofit group has been funding the official portraits of presidents and first ladies that hang in the White House since 1965.

The presidential portraits in the White House date back to Gilbert Stuart's iconic painting of George Washington. First lady Dolley Madison famously saved the painting when she and President James Madison fled the president's mansion as the British torched the place in 1814 during the War of 1812.

"Presidents and first ladies typically select their respective artists before leaving the White House," the association said. But sometimes they aren't happy with the initial results.

In 1902, Roosevelt detested his portrait by French artist Theobald Chartran so much that he hid it in a closet and then had it destroyed. He complained that it made him look more like a meek kitty than "the powerful president." He chose artist John Singer Sargent to paint a new one that made him look more macho.

Johnson refused to accept his portrait by noted artist Peter Hurd, who showed him standing in front of the Capitol and holding a book. In the portrait, "Johnson looms like some hulking cow hand," wrote Time magazine columnist Hugh Sidey. "The mouth that Hurd has painted is firm, even capable of meanness," and the Vietnam War and Watts riots are reflected "in the furrows of the brow and eyes."

Johnson switched to Elizabeth Shoumatoff, who had painted the official portrait of President Franklin D. Roosevelt. In her portrait, also with the Capitol in the background, Johnson looks "unbelievably pleasant," Sidey wrote. But between the two paintings, he wrote, those who knew Johnson "will recall with fondness 'the other one' — the real one."

President Richard M. Nixon didn't have time to sit for a portrait before he resigned in 1974 because of the Watergate scandal. He finally had one done by Alexander Clayton, showing the former president sitting at his Oval Office desk. The painting turned up on a White House wall in 1981, "placed without fanfare," news services reported.

But Nixon wasn't satisfied with the painting. In 1984, he donated a new portrait by James Anthony Wills, who had painted President Dwight D. Eisenhower's portrait. "He liked it better," said a federal official.

The official unveilings of presidential and first lady portraits began in May 1978, when Democratic President Jimmy Carter hosted former Republican president Gerald Ford and Betty Ford. The former president said he saw the final portraits by Everett Raymond Kinstler only moments before the ceremony began. "In my case, considering what Kinstler had to work with, he did well," he said.

Carter, who had defeated Ford in the 1976 election after Watergate, praised Ford as "a man who led our country in time of crisis and strain and who bought capability and knowledge to heal our wounds. No one appreciates him more than I do."

Much of the focus was on Mrs. Ford, who had just left four weeks of alcohol and drug rehabilitation. As a crusader for the treatment of drug and alcohol abuse, she "has earned the admiration of our nation for her courage and complete candor," Carter said.

At Carter's request, there was no public unveiling of the White House portraits of him and his wife, Rosalynn. But Reagan agreed to resume the tradition after he left office in 1989.

Reagan's portrait unveiling was delayed because he and his wife, Nancy, didn't care for the first effort by Aaron Shikler, who had painted the official portraits of President John F. Kennedy and Jacqueline Kennedy. Nancy Reagan liked Shikler's painting of her in a red dress, but she thought her husband's portrait lacked that "twinkle in his eye."

Shikler had to start over. The final version was unveiled in November 1989 by President George H.W. Bush, who had been Reagan's vice president. "When the announcer here said 'Mr. President,' why I fell back to where I comfortably was for eight years," Bush quipped. But the Shikler portrait was only a placeholder. In 1991, it was replaced with a new Reagan portrait by Kinstler. 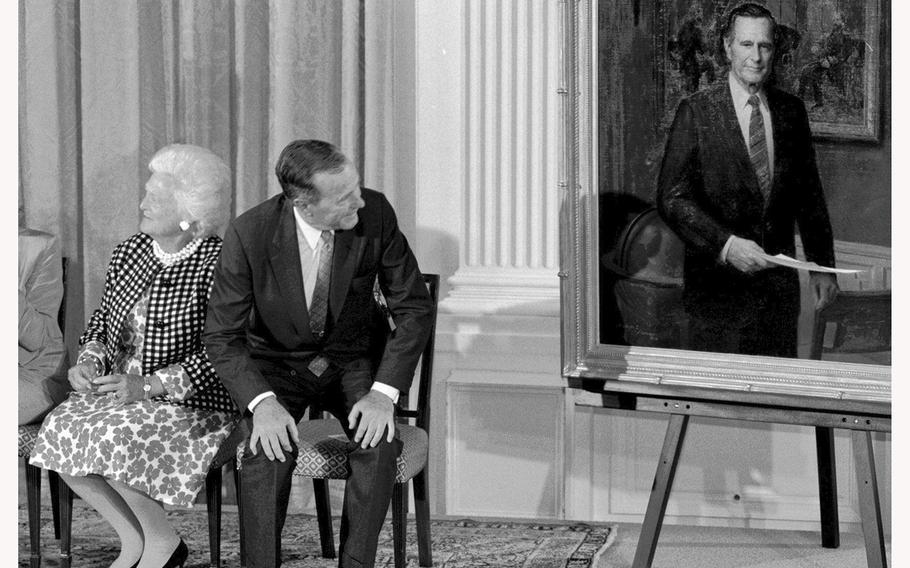 Bush was pleased with his portrait by Herbert Abrams when President Bill Clinton unveiled it in 1995. "I'm inclined to think it's pretty darn good," Bush declared. Clinton told the former president, "If I look half as good as you do when I leave office, I'll be a happy man."

But Barbara Bush wasn’t thrilled with Abrams’ matronly portrait of her. So 10 years later, she had a second painting done by Charles Fagan that showed the former first lady with a photo of her pet spaniel, Millie.

In June 2004, President George W. Bush welcomed Bill and Hillary Clinton when unveiling their portraits. Bush praised Bill Clinton for "the forward-looking spirt that Americans like in a president." Clinton responded, "I hope that I live long enough to see American politics return to vigorous debates where we argue who's right and wrong, and not who's good and bad." The paintings of both Clintons were done by artist Simmie Knox.

The Obamas unveiled the portraits of Bush and first lady Laura Bush by John Howard Sanden in May 2012. Obama lauded Bush's "strength and resolve" after the terrorist attacks of Sept. 11, 2001. He also thanked him for leaving behind a "really good TV sports package" at the White House.

"We are overwhelmed," Bush responded. The former president fought back tears as he thanked his father, whose portrait already hung in the White House.

"We may have our differences politically," Obama said, "but the presidency transcends those differences."

Ronald G. Shafer is the author of "Breaking News All Over Again: The History Behind Today's Headlines," a collection of his Washington Post Retropolis columns.

An earlier version of this article listed the incorrect artists for Barbara Bush’s portraits. Her first portrait was by Herbert Abrams, and her second was by Charles Fagan.