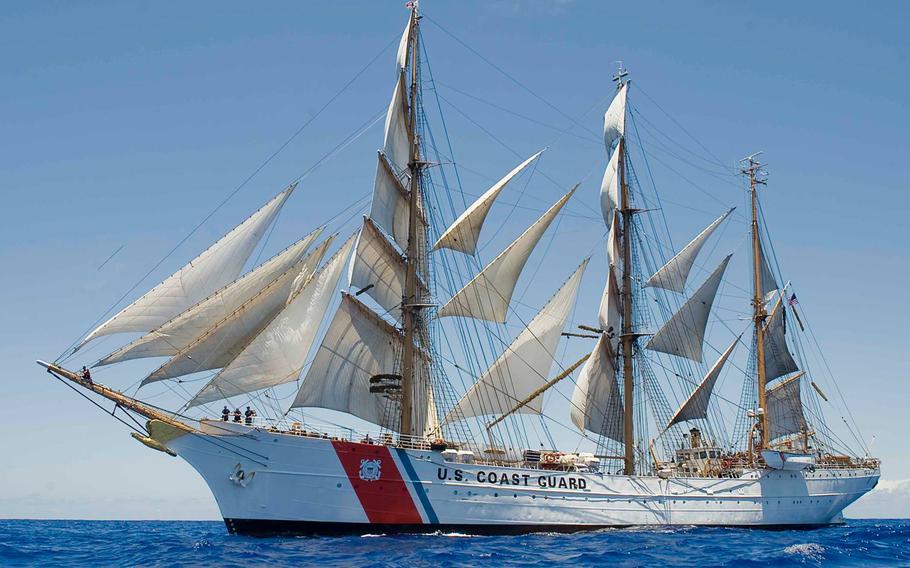 NEW LONDON, Conn. (Tribune News Service) — When he was a boy, Jeffrey Glowski said he built a toy model of the ship his father sailed across the Atlantic Ocean.

Now, 76 years after the Coast Guard barque Eagle first arrived in New London, Glowski was aboard the ship he previously had never seen in person.

"It was just a little sentimental, really," Glowski said of the experience. "Amazing."

Glowski's father, Jerome Glowski, was a member of the original commissioning crew that pieced Eagle back together in the aftermath of World War II in Bremerhaven, Germany. Jerome had been stationed in Newfoundland for most of the war on submarine duty, Jeffrey said, but was one of the few who flew to Germany with Cmdr. Gordon McGowan to claim the USCG's war prize, named "Horst Wessel" at the time, while the allies divvied up the remnants of the German fleet.

Glowski, 72, said his father, a radio operator aboard Eagle, didn't tell too many stories of the maiden voyage nor of the crew pieced together of Coast Guardsmen, former German crewmen and some "borrowed" German ex-navy volunteers from a British minesweeping project.

"He talked about the hurricane," Glowski said of his late father. "That was a scary time going through that. Not much more."

McGowan and his crew were a day or so away from their destination when they found themselves in the middle of a hurricane that ripped apart Eagle's sails and caused an estimated $20,000 in damages. Glowski detailed how he too had been sailing once when confronted by a storm that packed 70 knot winds with main sails in the water and the boat on its side.

He much preferred to re-enact the other parts of his father's tenure on Eagle, like visiting the same radio room his father had many years back.

Glowski, led by Eagle's Sail Master, Chief Warrant Officer Melissa Polson, toured all 295 feet of the tall ship. While the radio control room was at the top of the list, Glowski saw it all. The tour made stops in the captain's quarters, the mess deck, the sleeping quarters. From the ship's bow to its stern, Glowski took every step, and a few photos for keepsakes.

"I just can't imagine back then," Glowski said, looking at a photo of Coast Guardsmen resting in hammocks to accommodate the tight space.

Nowadays, for the Coast Guard's training ship, there are rows of bunk beds.

While modern amenities, like electronics, cooking equipment and laundry machines, have made their way to Eagle, the majority of the ship is original. Polson explained how parts of the hull had to be replaced and the main decking was redone in the 1980s, but the majority of the hull, the fittings and structures, and the main mast, are all original.

In 2014 through 2018, Eagle underwent a Service Life Extension Project to address the ship's longevity, and will do so again in 2028 to address concerns for the following 15-20 years.

This winter, the ship will dry dock for a "mast overhaul," Polson said. She explained the foremast, the running rigging, the standing rigging, blocks, lines, sails and yards will all come off and be "re-overhauled" before she sets sail again.

Before Glowski "set sail" back home to Indiana, where he grew up with his two brothers, he gifted Polson a photo of his father, sitting in Germany with Eagle in the distance. It was placed in front of a photo Polson said she shows all guests, one of Eagle in its dilapidated state in Germany, nearly identical to Glowski's photo.

Across the room hung a painting of Eagle commissioned by the son of the ship's original captain. Polson said Glowski's father likely sailed across the ocean with the painter aboard the ship.

"Just such a unique collaboration of …" Polson said, her thoughts drifting.