Great Moon Hoax of 1835 convinced the world of extraterrestrial life 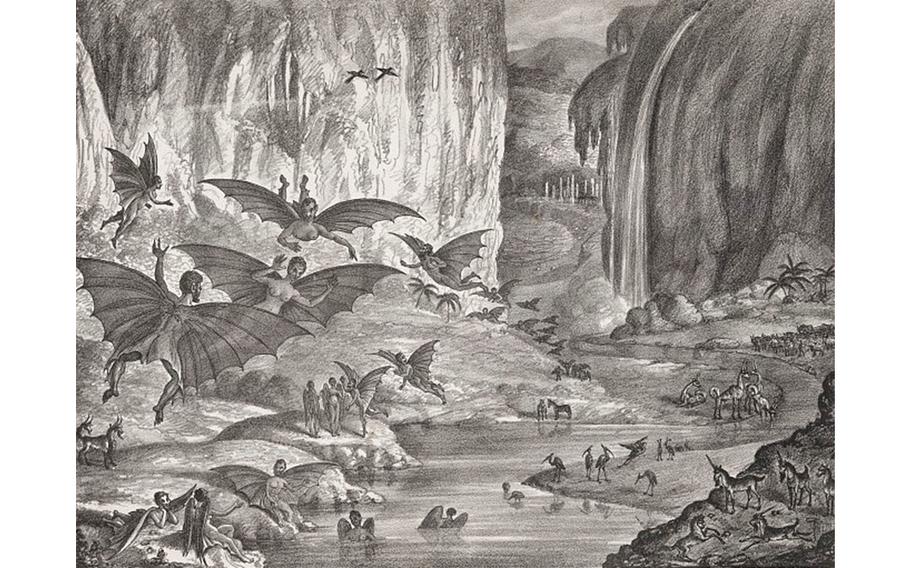 A 1935 illustration in the New York Sun claimed to show animals on the moon, discovered by Sir John Herschel in his observatory at the Cape of Good Hope, and copied from sketches in the Edinburgh Journal of Science. (Benjamin Henry Day/Library of Congress)

On July 31, a prominent French physicist tweeted an image of what he said was a distant star captured by the new James Webb Space Telescope. Étienne Klein emphasized to his 91,000 followers “the level of detail” shown of Proxima Centauri, located 4.2 light-years from the sun, which appeared as a glowing red circle on a black background.

The photo image, he later admitted, was actually a slice of chorizo.

Klein apologized on Twitter for the prank and said it was a joke gone wrong, saying that no “object related to Spanish charcuterie exists anywhere else other than on Earth,” according to CNN.

This is not the first time people have been duped by fake reports of out-of-this-world discoveries. Perhaps the greatest of them all occurred in 1835. The Great Moon Hoax emerged from a series of newspaper articles describing newly discovered life on the moon, including winged humanlike creatures and never-before-seen species of flora and fauna.

Readers were astounded by the reports in the New York Sun, which were reprinted in many newspapers in the United States and Europe. The articles, purportedly written by Dr. Andrew Grant, detailed the discoveries of Sir John Herschel, a widely known astronomer who in real life had speculated on the possibility of life on the moon.

The Sun ran six articles on the discoveries over the course of a week beginning on Aug. 25, 1835. The stories included amazing descriptions of life on the moon, as viewed through an enormous telescope with “hydro-oxygen” lenses built by Herschel at an observatory on the Cape of Good Hope in South Africa.

According to the Sun, the articles were reprinted from the Edinburgh Journal of Science in Scotland. In them, Grant wrote about golden temples and a ruby coliseum built by Vespertilio-Homo, a Latin name meaning “bat-man,” which was given to the humanoids populating the moon.

He also reported how “some of their amusements would but ill comport with our terrestrial notions of decorum.” Apparently, these winged humans liked to share intimate moments in public — presumably of a sexual nature.

Grant went on to describe other animals seen through the telescope. They included a large bipedal beaver that carried its young in its arms, as well as herds of beasts similar to bison, goats “of a bluish lead color” and “a strange amphibious creature, of a spherical form.”

Readers were captivated by the accounts, published under the heading “Great Astronomical Discoveries, lately made by Sir John Herschel.” New Yorkers reportedly spoke of nothing but the lunar revelations for days. Other newspapers were quick to jump on the story, reprinting the articles soon after they ran in the Sun. Publications as far west as Cincinnati and in London and Paris carried the series.

Asa Greene, editor of the New York Transcript, recalled in 1837 how everyone seemed caught up in the stories:

“The credulity was general. All New York rang with the wonderful discoveries of Sir John Herschell [sic]... There were, indeed, a few skeptics; but to venture to express a doubt of the genuineness of the great lunar discoveries, was considered almost as heinous a sin as to question the truth of revelation.”

At first, people generally believed the reports. “In sober truth, if this account is true, it is most enormously wonderful,” former New York mayor Philip Hone wrote in his diary. Soon, though, as more fantastical accounts were released, some started to have their suspicions.

One of the first publications to voice its doubt was the Journal of Commerce, a biweekly magazine in New York that primarily covered global trade news. Its editor wrote, “There is no doubt but the article was manufactured in this country, and that it belongs to the same school as Robinson Crusoe and Gulliver’s Travels.”

Slowly the truth began to emerge. On Aug. 31, James Gordon Bennett Sr., owner of the New York Herald, printed an article titled “The Astronomical Hoax Explained.” He presented evidence debunking the Sun’s stories, pointing out that the Edinburgh Journal of Science — the supposed source of the series — had ceased publication in 1833.

And there was no Dr. Andrew Grant, nor did the fabulous telescope exist. Herschel, who was real, did build a telescope at his observatory in South Africa, but it could see only the stars — not life on other planets.

Bennett also identified the author of the unsigned articles: Richard Adams Locke, a New York Sun reporter. The Herald publisher proffered flimsy evidence of Locke’s involvement, but it appears he was on target. In 1840, Locke admitted he was the writer, although some historians speculate other authors helped craft the tall tale.

For its part, the public seemed amused by the revelation, taking it as a good-natured joke. At the time, the profession of journalism was not well-established, and most people understood that newspapers were not always purveyors of accurate information.

One of those who did object was Edgar Allan Poe, the author of many otherworldly stories of his own. He argued that the Sun’s series ripped off one of his stories published a few months earlier. In “The Unparalleled Adventure of One Hans Pfaall,” which Poe also claimed was a true story, the hero visits the moon in a hot-air balloon.

“The hoax was circulated to an immense extent, was translated into various languages — was even made the subject of (quizzical) discussion in astronomical societies ... and was, upon the whole, decidedly the greatest hit in the way of sensation — of merely popular sensation — ever made by any similar fiction either in America or in Europe,” Poe wrote later.

An unsuspecting Herschel continued working at his observatory in South Africa. In the days before transatlantic cables, he was unaware of the hoax until late in the year, when an American businessman handed him one of the newspapers. After reading it, he reportedly blurted out, “This is a most extraordinary affair! Pray, what does it mean?”

Though initially amused, Herschel soon tired of the publicity and incessant questions. An unsent letter he wrote in 1836 to a London magazine — discovered in 2001 — reveals his feelings at the time:

“I feel confident that you will oblige me therefore by inserting this my disclaimer in your widely circulated and well conducted paper, not because I have the smallest fear that any person possessing the first elements of optical Science (to say nothing of Common Sense) could for a moment be misled into believing such extravagancies, but because I consider the precedent a bad one that the absurdity of a story should ensure its freedom from contradiction when universally repeated in so many quarters and in such a variety of forms.”

Locke never apologized for what later became known as the Great Moon Hoax, although he admitted in an 1840 letter published in the New World newspaper that it was meant as satire.

Three years later, Locke tried to pull off another hoax in the New Era, a New York newspaper. He wrote that he had discovered a long-lost letter of Scottish explorer Mungo Park, who had disappeared in West Africa in 1805. Nobody was buying his story this time, though.

Locke eventually gave up journalism and worked for the Customs Service in New York. When he died in 1871, the New York Sun reported in his obituary:

“Mr. Locke was the author of the ‘Moon Hoax,’ the most successful scientific joke ever published. ... The story was told with a minuteness of detail and dexterous use of technical phrases that not only imposed upon the ordinary reader but deceived and puzzled men of science to an astonishing degree.”

As Klein later wrote on Twitter about his Spanish sausage prank, “Let’s learn to be wary of the arguments from positions of authority as much as the spontaneous eloquence of certain images.”