The man who shot Ronald Reagan wants to play concerts. It's not going well. 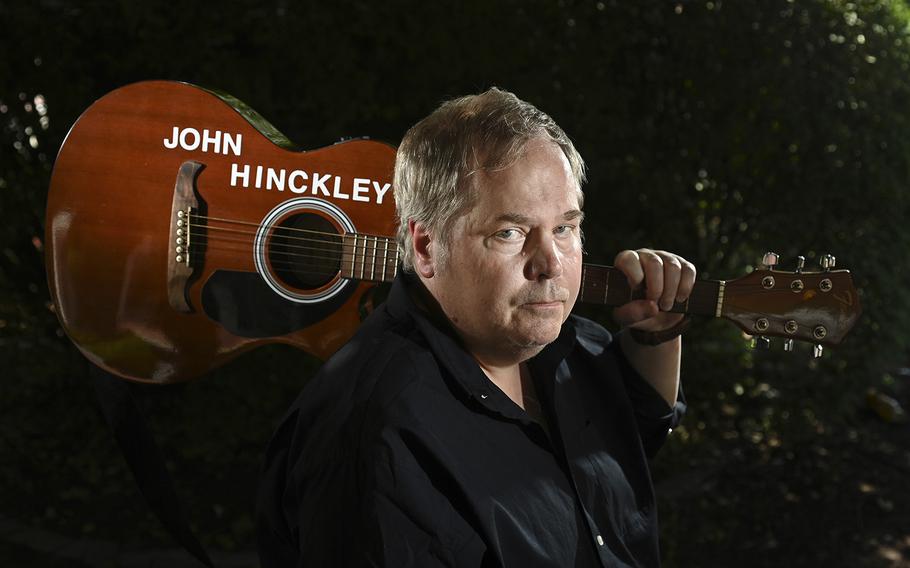 John Hinckley Jr., who shot President Ronald Reagan in 1981, has tried to start a career in music but has found getting live dates difficult. (Matt McClain/Washington Post )

In early June, John W. Hinckley Jr. was freed after 41 years of oversight from the court and mental health systems. Having faced gradually loosening restrictions over many years, he now no longer needs to notify the court when he travels, he can access social media and email, and he can use his own name commercially.

But Hinckley, who shot President Ronald Reagan in 1981, has come to realize that freedom is relative. The notoriety that has followed him for decades is preventing him from what he wants to do the most: Perform music to a live audience.

On the same day the order went into effect releasing him from court oversight, Hinckley learned a music club in Brooklyn had, citing safety concerns from threats directed at them online, canceled a small sold-out concert in July, where he hoped to perform 17 original songs. The event represented a lifelong dream for the 67-year-old, who began playing the guitar when he was a teenager. It was one of several concerts - the others in Chicago; Hamden, Conn.;, and Williamsburg, Va. - that abruptly canceled for similar reasons.

"I had been thinking about this concert for several months now, planning and practicing," he said.

If he were any other shooter - found not guilty by reason of insanity and later deemed not a danger to himself or others - Hinckley might have been free of the court system years ago, and blending in with his guitar at a New York City club. But his victims included a U.S. president, as well as a press secretary, a Washington D.C. police officer and a Secret Service agent. Many people are not eager to see him enjoy the benefits of a life without court supervision.

The Reagan Foundation opposed lifting Hinckley's restrictions and his attempt at a music career, saying in a statement that Hinckley "apparently seeks to make a profit from his infamy." A 2021 op-ed in The Washington Post by Patti Davis, one of Reagan's daughters, also protested his freedom.

"I don't believe that John Hinckley feels remorse," she wrote. "Narcissists rarely do."

The Market Hotel, located in Brooklyn's Bushwick neighborhood, released a statement on social media that said the concert was "not worth a gamble on the safety of our vulnerable communities . . . in a dangerously radicalized, reactionary climate."

"It was quite a disappointment," Hinckley said. Five hundred tickets had already been sold. The venue said it was being inundated with "some very real and worsening threats and hate."

Until he emerged on Twitter in October 2021, Hinckley was well-known mostly to people who remember the Reagan years and that March day in 1981 when he fired six shots at the president outside a hotel in Washington. Besides Reagan, the shots hit press secretary James Brady, a D.C. police officer, and a Secret Service agent. Brady suffered brain damage and died of his injuries in 2014.

A jury found Hinckley not guilty by reason of insanity, and he was ordered to live in a psychiatric hospital in Washington for more than three decades.

However, starting in 2003, the court started allowing him visits with family, and in 2016 he was approved to live full-time in Williamsburg, Va., where his parents had relocated so they could be nearby. The rulings came with restrictions, such as giving officials access to email accounts and electronic devices and notifying them if he planned to travel outside of a set distance from his home.

As Hinckley worked to manage his mental illness privately, his public image continued to root him in 1981, when he shot the president and others out of a deranged plot to impress the actress Jodie Foster. A 1990 Stephen Sondheim musical, "Assassins," made him a character alongside Lee Harvey Oswald, who shot and killed President John F. Kennedy, and John Wilkes Booth, who shot and killed President Abraham Lincoln. Conspiracy theories about his family fester in dark corners of the internet. Different punk bands have made him a subject of their songs. The pop band Devo even put one of his poems to music.

Hinckley says he doesn't watch television and isn't interested in learning what people say about him. "I don't read up on that at all," he said. "And I don't want to know."

But after decades of silence, Hinckley has something to say.

"I just don't have the depression and isolation that I had back then," he said. "That's what was driving me 41 years ago. But I have not had depression for many, many years. If I try to think about the way I was in 1981, I can't do it. I mean, what in the world was I thinking? It's like it was like another person. I do have remorse certainly for what happened. It's in one of my songs."

The nearly 40 songs he has posted to YouTube, Spotify and other streaming services reflect his journey in the simplest terms. "I was lost in the world/enough to make you cry," he sings in one song that laments the hardship of living with "nagging fear I would not be free."

Music is soothing for him. "It's just a good feeling to write a good song," he said. But his ultimate purpose, he said, is to communicate with others.

"I write peaceful songs. The climate in the country now is just so bad. I just try to write songs to uplift people," he said.

On video, Hinckley presents an austere picture: He performs solo with an acoustic guitar against a plain backdrop. His songs are simply constructed and strummed. The music, which has attracted 30,000 subscribers on YouTube and more than 15,000 monthly listeners on Spotify, has connected with an audience he did not expect: Generation Z listeners who weren't even alive in 1981.

"They don't have their parents' or even their grandparents' prejudice about me. They're open-minded," Hinckley said. Since he emerged on Twitter, he has been barraged with messages from young people, including some musicians, who encourage him and say they recognize themselves in his struggle with mental illness.

Bunny Gaubert, 25, contacted Hinckley via Twitter and ended up creating his website and booking his Chicago date, which the venue later canceled. She said her generation is more willing to forgive Hinckley because his infamy pales in comparison to the new realities of growing up in "the weird, dark America" after 9/11.

"Our world has less shock value" than in 1981, she said. As someone who suffered mental illness in her teenage years, she said she can also empathize with his journey to get well. "After being put away like that and judged, he could have chosen anger and resentment, but instead he chose to make songs of peace," she said.

Matt Paneth, an independent concert promoter in New York who booked the Brooklyn show, characterized Hinckley as someone who is simply trying to regain lost time.

"He didn't get to experience life and he's putting out a message of positivity in his music. There's something heartfelt and honest about it," said Paneth, 31, whose company, Scenic Presents, specializes in punk shows. One Hinckley song, "Never Ending Quest," he said is particularly poignant: "He's saying he's on this quest to get out there and live his life. That's a beautiful, honest message."

After living in his mother's house until her death last summer, Hinckley relocated to a one-bedroom apartment in Williamsburg where he lives with his cat, a blonde tabby named Theo. He practices guitar, talks with neighbors in his building, and maintains a vinyl record collection he's had since he was a teenager - Bob Dylan, The Beatles, The Who and The Kinks are his favorites. "I am sure there are new bands that I would like, but I always go back to '60s music," he said.

His friends are those who live in his building or work at the nearby antique mall, where he once had a booth but now consigns items he finds around town. Twelve years ago, while hospitalized, he took up painting abstract renderings of men, women and sometimes cats. They sell within minutes when he posts them on eBay.

"I'm not a great painter," he admits. "I don't get a thrill of my painting like I do the music." Besides his monthly Social Security check, the paintings provide a regular income.

Williamsburg is his comfort zone. "People are nice to me," he said. Every Tuesday, he joins a small therapy group, and he visits his psychiatrist once a month in a nearby town.

"But mainly my focus is trying to come up with a new song," he said.

Hinckley spends significant time dealing with the steady stream of documentary filmmakers, autograph hounds, and other curiosity seekers who lobby for his attention online, he said. But what he wants is to play his first show and have the world move on.

After three dates were canceled earlier this summer, Hinckley took it into his own hands to rent the theater located in the Williamsburg Regional Library for a date in November. But three hours after he announced the date on Twitter in early August, that venue, too, canceled his appearance because "the library immediately received hostile comments through chat and email" and it was becoming apparent "the concert was clearly going to become a major disruption to library operations," Desiree Parker, the library's spokesperson, said via email.

Though some see his presence as controversial, mental health experts, and even prosecutor Kacie Weston - who did not object to Hinckley's June 15 release from oversight - characterize Hinckley as someone who "has demonstrated the success that can come from a wraparound mental health system." A judge found he was "no longer a danger to himself or to others."

Phillip Resnick, an expert in forensic psychiatry at Case Western Reserve University School of Medicine in Cleveland, said Hinckley's hospitalization was unusually long for someone found not guilty by reason of insanity. "The average hospital length is three to four years. He has been in a hospital for an extraordinary length of time because of the infamy of his crime, rather than evidence," he said.

Performing music in public "would not be a concern for anyone with a psychiatric problem," he said. "It's not as if you're taking him from an inpatient situation and just plopping him out in public. He has been in the public under supervision for years."

Paneth, who recruited a drummer and bass player for Hinckley, said he continues to search for venues to work with because he believes Hinckley "deserves a stage."

Hinckley said he is waiting things out, driven only by the "love of the music and trying to keep a positive attitude." One piece of good news he received last month was learning that Asbestos Records, an independent ska and punk rock label, will release a vinyl recording of Hinckley's songs later this year, according to Matt Flood, the label's president. Once people hear his songs, Hinckley said, they will understand his only agenda is "putting out a positive vibe."

One of those songs, says it all: "You only know what used to be/you don't know a different side of me," he sings. "The past is over/I have found a new and better day."