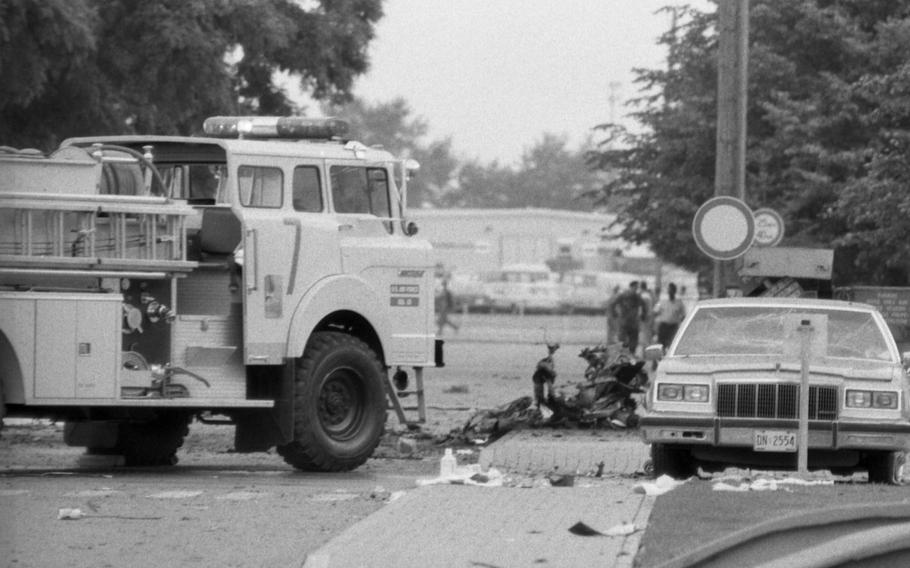 A fire truck at the scene of the explosion at Rhein-Main Air Base, Germany, Thursday, Aug. 8, 1985. (Gus Schuettler/Stars and Stripes)

This article first appeared in the Stars and Stripes, European edition on Aug. 9, 1985. It is republished unedited in its original form.

"Cars were jumping over each other, and then there was all that fire and smoke," said base photographer George Wegemann, who had just reported for duty. "I saw one person lying on the sidewalk. You can still see the blood over there where part of an engine flew into the street."

Air Force officials said there were no calls claiming responsibility for the bombing.

The explosion killed one man and one woman. Air Force officials identified the dead man as A.1.C. Frank H. Scarton, 19, of Woodhaven, Mich., assigned to the 437th Military Airlift Wing, Charleston AFB, S.C. He was on temporary duty at Rhein-Main.

Air Force officials did not identify the other fatality pending notification of next of kin, but initial reports indicated she was a servicemember's wife.

The bomb exploded behind the 435th Tac Airlift Wing headquarters building in a parking lot bounded by a dormitory and the audio-video club. 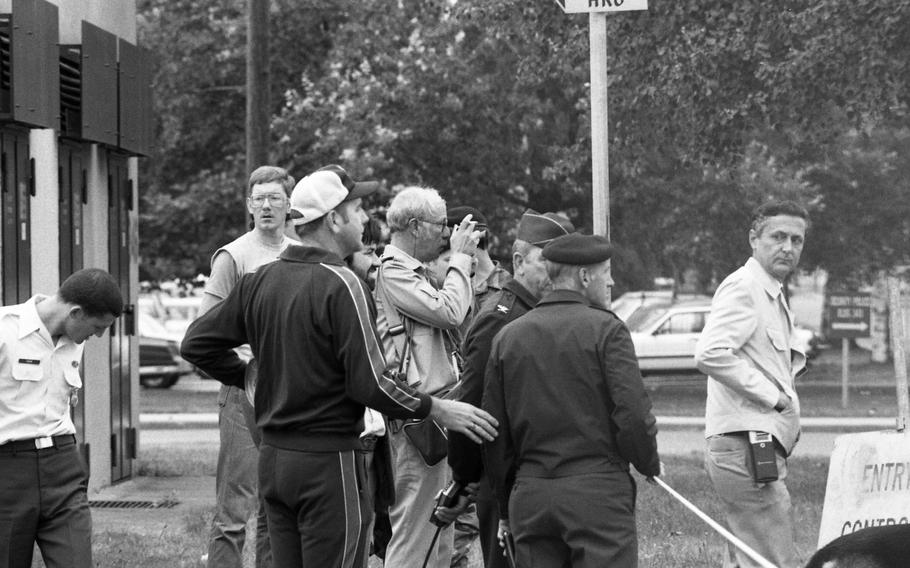 Press and onlookers at the scene of the deadly bombing at Rhein-Main Air Base. (Red Grandy/Stars and Stripes) 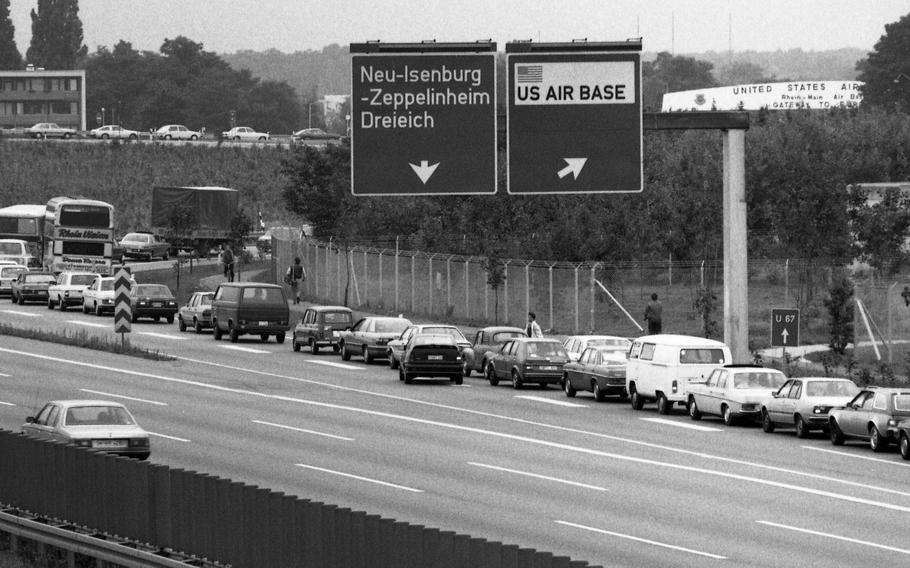 Security was immediately tightened after the blast. As many as 400 cars were backed up, waiting to enter the base. (Red Grandy/Stars and Stripes) 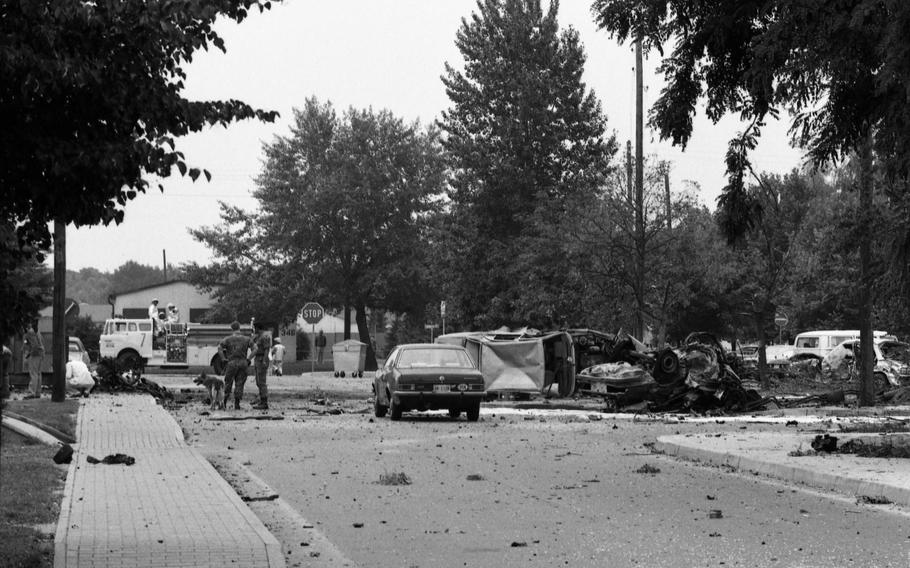 Explosive-sniffing dogs were brought in to search the area for more bombs. (Red Grandy/Stars and Stripes) 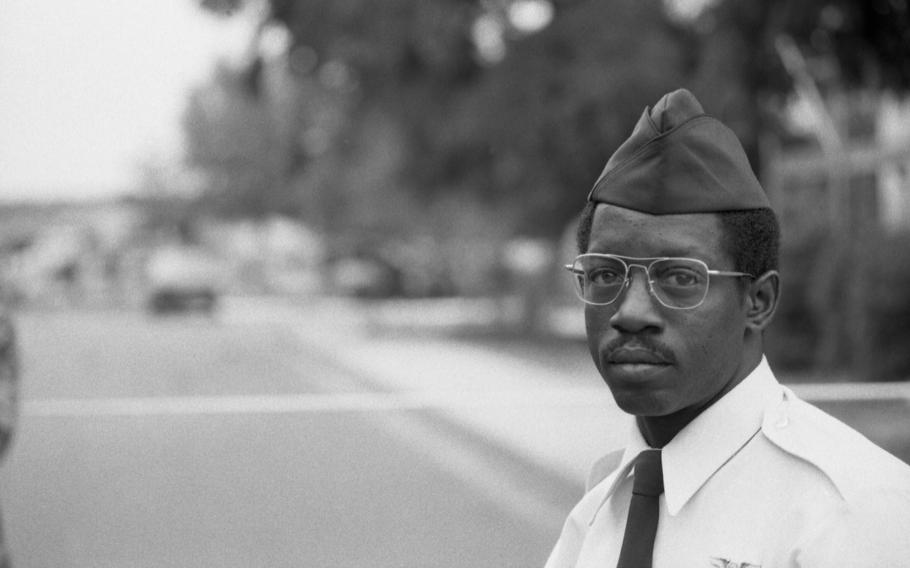 Staff Sgt. Larry Stewart was a few minutes early for duty Thursday, Aug. 8, 1985, which he believes may have saved his life. “Normally I park a couple of yards from where the blast occurred, but this morning I was a few minutes early, so I stopped at the post office first. I was still in the post office, when I heard it.” (Red Grandy/Stars and Stripes)

About 30 cars were damaged as the blast ripped out windows and doors of surrounding buildings and sent debris flying hundreds of yards. The facades and roofs of several buildings were damaged, but officials said there was no structural damage.

The attack was the seventh this year on U.S. or NATO military installations in Germany, and the first one in which people died.

German Interior Minister Friedrich Zimmermann sent a telegram to wing commander Col. Ronnie C. Peoples, expressing deep regret over the incident, which he said would evoke revulsion and outrage throughout his country.

German authorities are in charge of the investigation.

Specialists spent the day sifting through the debris, marking items and taking photographs.

The entire bomb site was cordoned off.

Several adjacent buildings, including the transient facilities and Burger Bar, were evacuated as a precaution.

To keep out gawkers, investigators also blocked off a five-block area including the headquarters, dormitory, audio-video club and transient quarters.

Appointments at the base clinic were canceled.

Investigators said they suspect the Red Army Faction, once known as the Baader-Meinhof gang, was responsible for the bomb.

Their opinion was based on the fact the bombing had much in common with the group's favored style of attack — the time of day, the method of delivery — and the fact that a member of the faction is on trial in Duesseldorf for the 1981 bombing at Ramstein AB.

The fact that the blast occurred when most airmen were arriving for duty was no coincidence, said Capt. Lorrie Bourland, base public affairs officer. "It was done very smartly to inflict very serious damage."

German investigators believe a metallic green 1976 Volkswagen Passat was driven onto the base early Thursday morning and was parked behind the building. Officials said the car got on base because it bore counterfeit USAREUR plates with the number DN 4544.

They believe the driver was dressed in military clothes and escaped by walking off base to a waiting car.

Officials said the airman victim was dead at the scene. 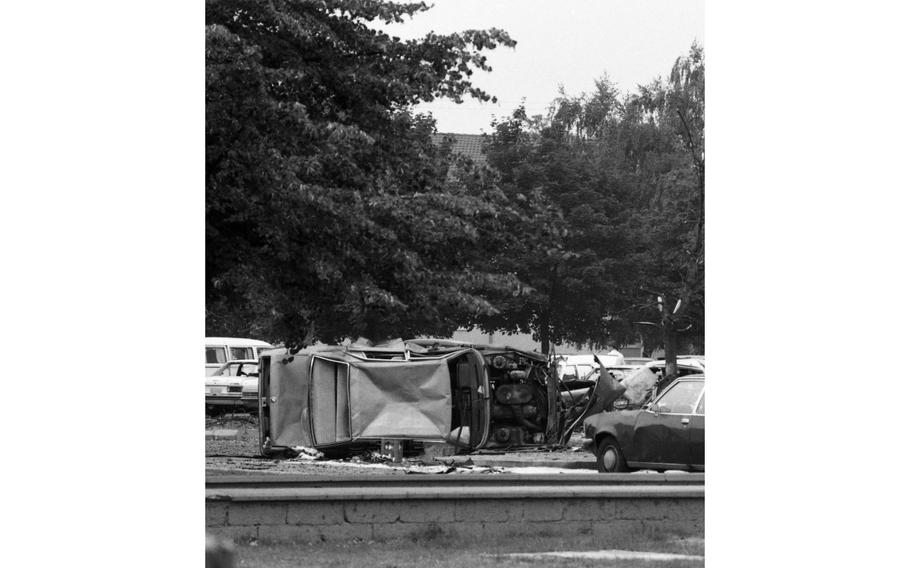 Wrecked automobiles are strewn over the parking lot behind the 435th Tactical Airlift Wing headquarters building. The parking lot is bounded by a dormitory and the audio-video club. (Red Grandy/Stars and Stripes) 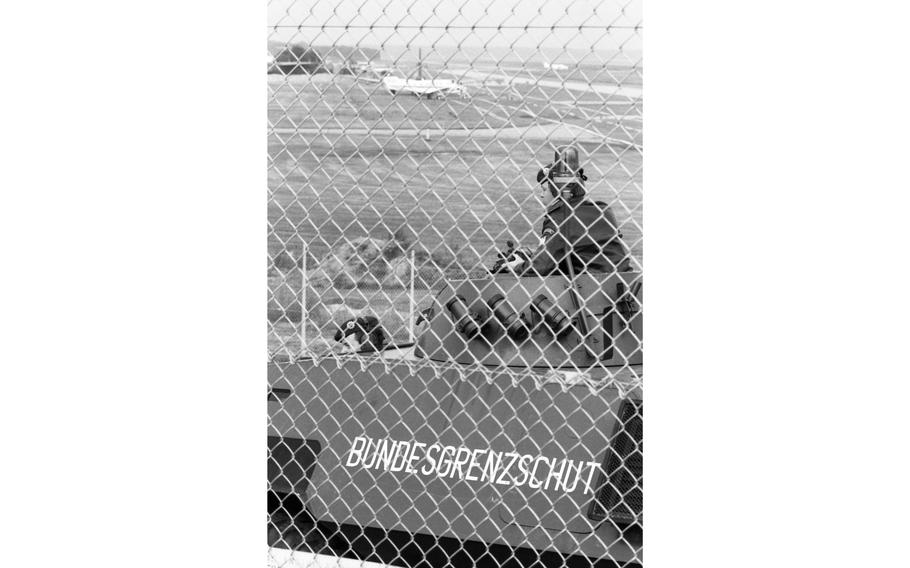 West German Border Police Bundesgrenzschutz positioning itself to guard the air base. (Red Grandy/Stars and Stripes) 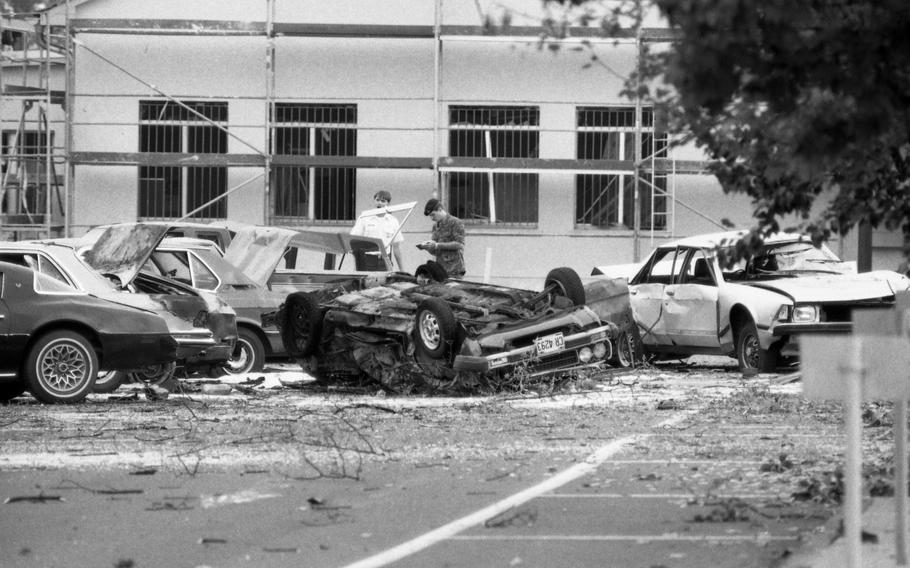 Investigators sift through rubble and wrecked automobiles following a car-bomb explosion in a parking lot at Rhein-Main Air Base. (Red Grandy/Stars and Stripes) 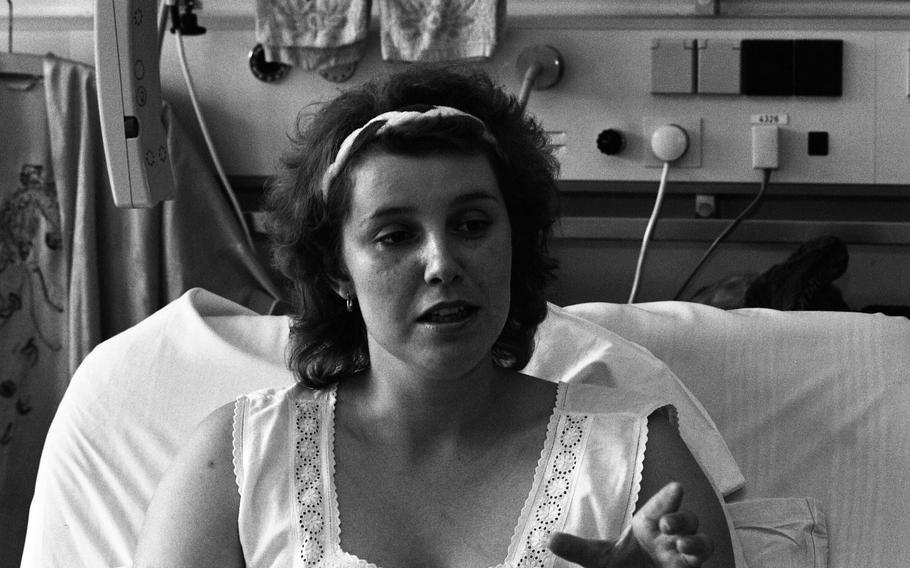 Barbara Reuter, a German employee at Rhein-Main Air Base, talks to reporters from her hospital bed Aug. 22, 1985. Reuter, a 24-year old from Sachsenhausen, was one of 20 people injured when a car bomb exploded in the morning of Aug. 8, 1985. Two people were killed, one of them Reuter’s friend Becky Jo Bristol. (Lynda Sparks/Stars and Stripes)

The woman survived the blast and was flown by Army helicopter to the Army hospital at Landstuhl.

Officials at the hospital, which specializes in burn treatment and neurological care, said the woman was dead on arrival.

Officials said she was a 23-year-old servicemember's wife, and she probably died of head injuries. Her husband was on his way back from the States Thursday.

Two of the injured were taken to the Air Force hospital at Wiesbaden. One of them, a man who was inside when the blast occurred, was knocked down and may have suffered a concussion. He was being kept overnight for observation. The other was in serious but guarded condition. He underwent more than seven hours of surgery.

One of the injured hospitalized at Wiesbaden was identified by Air Force officials as Senior Airman Mathias M. Reams, 22, assigned to the 437th Military Airlift Wing.

Another victim was taken to the Army hospital at Frankfurt.

The other victims were treated and released at the base clinic.

Capt. George P. Sillia, deputy chief of public affairs, saw a "gigantic flash of light" just after arriving at his office in the headquarters building.

Sillia called ambulances and the command post and ran through the offices looking for injured.

"It sounded like an airplane exploded in midair," said recreation center manager J.C. Christiansen, who was in his office 100 yards from the blast. "I went through World War II here, and I heard a lot of explosions, but nothing like that before."

Pointing out a 2-foot-long piece of green, twisted metal at the rear of the center, Christiansen said: "Looks like it came from a BMW. It had to come over two buildings to get here."

Staff Sgt. Larry Stewart was a few minutes early for duty Thursday, which he believes may have saved his life.

"Normally I park a couple of yards from where the blast occurred, but this morning I was a few minutes early, so I stopped at the post office first," Stewart said. "I was still in the post office when I heard it. I ran out and saw my wife, who's also in the Air Force, running toward the office. She saw me and said, 'Oh God, I thought it was you.'"

Air Force security police, fire units and ambulances swarmed to the blast scene within two minutes. Fires were extinguished, and explosive-sniffing dogs were brought in to search the area for more bombs.

Security was immediately tightened at the base. Motorists entering the base had to show both sides of their identification cards, their vehicle registrations and drivers' licenses. As many as 400 cars were backed up waiting to enter the base.

Officials at Hahn AB said they had increased security, but they declined to provide details.

At the Darmstadt military community, security increased to check the front and back of identification cards, a full check of the photo, and the vehicle registration.

Not all military installations changed procedures.

A spokesman for the 56th Field Arty Brigade in Schwaebisch Gmuend, the only American Pershing II unit in Europe, said the command was satisfied with its security.

The base is the main transit hub for the movement of U.S. forces to and from the European Comd.

Thursday's bombing occurred about seven weeks after an unsolved bombing at the civilian commercial airport. That blast, on June 19, killed three people and injured scores of others.

Read Stars and Stripes staff writer Marcus Kloeckner’s story on the documentary following Kathleen Pequeno’s journey to Germany to meet the former terrorists who murdered her brother U.S. Army Spc. Edward F. Pimental the day before the bombing in order to gain access to the Rhein-Main base.