In 77th year since atomic bombing, Nagasaki issues a global call for peace 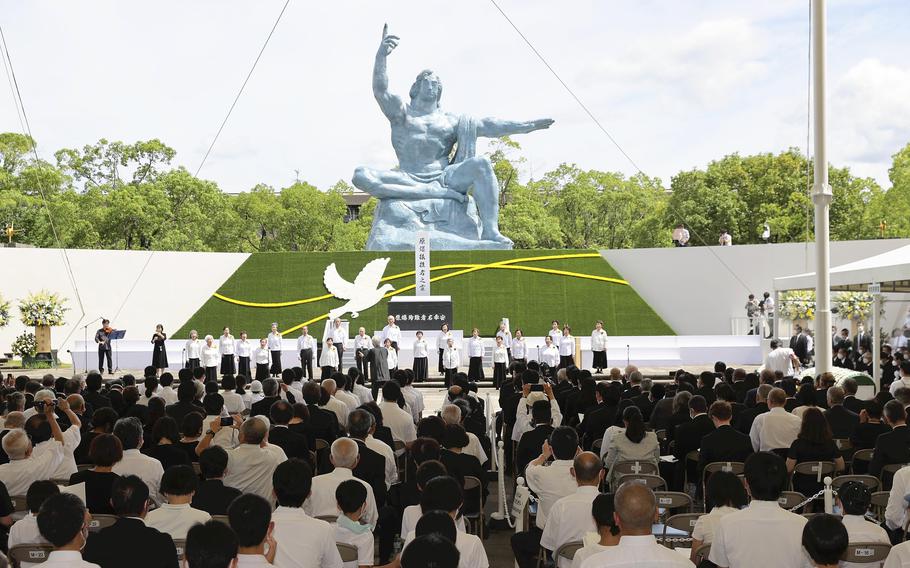 A choral group of atomic-bomb survivors performs in Nagasaki’s Peace Park to open a memorial ceremony on the 77th anniversary of the atomic bombing of the city. (Japan News-Yomiuri)

NAGASAKI — Atomic bomb survivors and bereaved families of victims offered prayers for peace on Tuesday during the 77th ceremony marking the U.S. atomic bombing of Nagasaki.

In the ceremony held from 10:40 a.m. at Nagasaki Peace Park, Mayor Tomihisa Taue said in the Nagasaki Peace Declaration, "We must recognize that ridding ourselves of nuclear weapons is the only realistic way of protecting the Earth and humankind's future at this very moment."

The ceremony was attended by Prime Minister Fumio Kishida and representatives from a record 83 countries, including nuclear powers China, France, the United Kingdom and the United States.

In Mayor Taue's peace declaration, he cited the words of the late Chieko Watanabe. She had survived the bombing while working at a factory as part of student mobilization efforts, but was paralyzed from the waist down. Watanabe had once told the world to "ensure that nobody like me is ever made again." Based on this episode, Taue emphasized, "No matter what, nuclear weapons must not be used!"

He then talked about Russia invading Ukraine, saying: "Threats of using nuclear weapons have been made, sending shivers throughout the globe. This has shown the world that the use of nuclear weapons is not a 'groundless fear' but a 'tangible and present crisis.'"

Because of the invasion, the city did not invite the ambassadors of Russia and Belarus, which has been supporting Moscow's actions. The Ukrainian ambassador was absent after being infected with the novel coronavirus.

Taue also pointed out that the Nuclear Non-Proliferation Treaty (NPT) and the Treaty on the Prohibition of Nuclear Weapons (TPNW) "were clearly reconfirmed as mutually complementing each other" during the first meeting of the states parties to the TPNW in June. He thus called on nuclear powers to set out specific processes for nuclear disarmament under the terms of the NPT, which stipulates their obligation to conduct good-faith disarmament negotiations.

The mayor also called on the Japanese government to show leadership in developing peaceful diplomacy within the international community, urging Japan -- "as the only nation to have suffered wartime atomic bombings" -- to sign and ratify the TPNW.

Takashi Miyata, 82, who took a pledge for peace on behalf of A-bomb survivors, said: "For 77 years, atomic bomb survivors have lived through anger, suffering and sorrow. We believe in a bright and hopeful future without nuclear weapons, and will live our life to the fullest."

At the ceremony, three volumes containing the names of 3,160 A-bomb victims confirmed dead in the 12 months through July 31 were added to a register. There are now 197 volumes and the total number of deaths of people related to the atomic bombing of Nagasaki rose to 192,310.

This year's ceremony saw a limited resumption of public attendance for the first time in three years, with about 1,600 people attending. In response to last month's fatal shooting of former Prime Minister Shinzo Abe, security at the ceremony site was tightened and uniformed police officers were deployed for the first time inside the large tent where dignitaries gather.