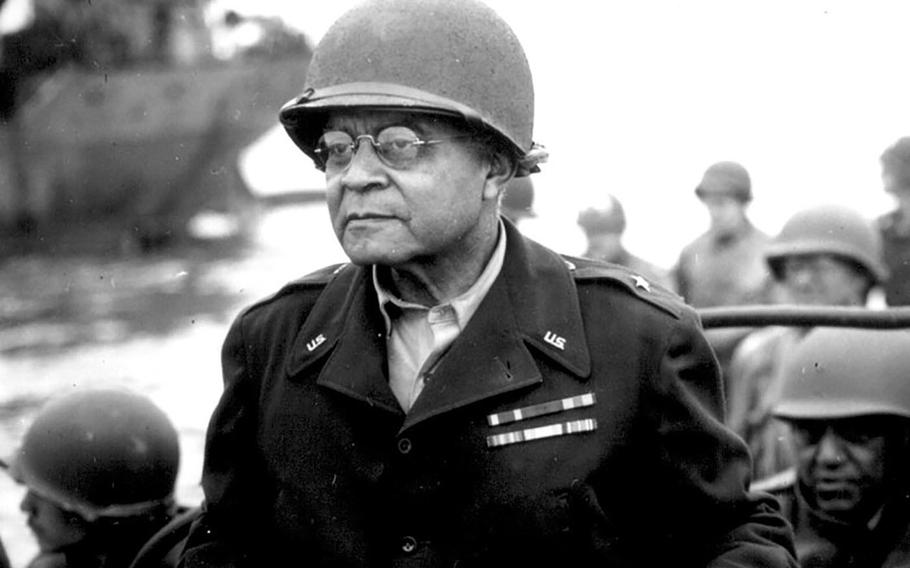 Davis Sr. — not to be confused with his son, Gen. Benjamin O. Davis Jr., who himself was an important historical figure — was the first Black one-star general in the U.S. Armed Forces and lived in Quarters 64 in 1912.

The ceremony included a color guard made up of Buffalo Soldier re-enactors and the unveiling of the dedication rock placed in front of the home to memorialize Davis Sr.

In an interview earlier this week, Paula Taylor, the former curator of the Warren ICBM and Heritage Museum on base, and Daniek Long, the current curator and Taylor's daughter, explained the significance of the dedication and the process it took to complete it.

"(Dedication) is not something that is common, so to acknowledge that somebody actually, physically was in that house is significant," Taylor said. "So, just applying a name to honor someone is awesome, but if you knew they actually lived there or that was their office … that increases the credibility (of the) information of that person and that structure."

Davis Sr. was a part of the 9th Cavalry Regiment, which is one of the Buffalo Soldier regiments of segregated troops in the U.S. Army.

"He was a very admirable, intelligent officer in a time in which he was able to flourish," Taylor said. "That is unbelievable. … Benjamin O. Davis Sr. and Col. (Charles) Young were significant in demonstrating the courage and the bravery, and the intelligence and the capability of what a trained troop can do," regardless of their race.

When Davis Sr. lived in Quarters 64 in 1912, he was without his wife, Cotton said at the dedication ceremony. She, at that time, was giving birth to their son, Davis Jr.

Davis Jr. was the first Black brigadier general in the U.S. Air Force (which split from the Army in 1947).

He commanded the World War II Tuskegee Airmen. He retired from the Air Force as a lieutenant general and was awarded the rank of full general by then-President Bill Clinton in 1998.

"Even though we are honoring his father, think about the historical significance of having (Davis Sr.) assigned here," Cotton said at the ceremony. "And the fact that now it is one of the cornerstones of strategic nuclear deterrence, Francis E. Warren Air Force Base, of which his son became a four-star-general. That's pretty amazing."

Taylor said that dedicating a building requires an official package of information to be submitted to the military branch. Because Davis Sr. lived in the home when the base was still part of the Army as Fort D.A. Russell, they had to submit paperwork through the Air Force and the Army, making the process more complicated.

Direct proof that Davis Sr. lived in Quarters 64 was required, Taylor said, although there was information he had likely lived there. Between the work of Taylor; Long, the museum curator; Kyle Brislan, the former wing historian; Jeremiah Foster, who is now the historian; and many others, it took nearly three decades to find that proof.

"The military does not retain housing records past a year once you leave," Taylor said. "Those records are not significant enough to be maintained, because so many other records are primary records, and they're more important, historically, for the Army's use. So finding housing is not a simple matter."

Taylor said she spent weeks looking through the National Archives in Washington, D.C., looked at archives all over Wyoming and dove into the base's history to attempt to find any record of Davis Sr.'s quarters.

Eventually, 29 years after beginning her search, Taylor and Brislan checked the State Archives again to see if they had anything new. They found a base directory from 1912, confirming where Davis Sr. lived, Taylor said.

"After that many years, it is something awesome to actually find that information," Taylor said. "Research is not as simple as calling somebody up and asking them a question, because a lot of people you can't call up. So, you have to track down some sort of document or reference … to understand what has happened in our past."

Taylor worked at the base museum from 1991 to 2021. She started on this project at the beginning of her career, after speaking with Cornelius "Doc" Settles, the founder of the Wyoming Buffalo Soldier Association.

After Taylor's retirement, Long and Foster continued working on the dedication and coordinated the ceremony. Long said she is grateful for Foster, too, because he took on the organization of the dedication ceremony after Long went on maternity leave.

"Just like in all activities and raising children, it takes a community to get something accomplished, and we (Long and Taylor) both recognize that we're not the only ones participating," Taylor said. "It's just wonderful to actually have seen something that I started my career trying to find, that was accomplished in my lifetime. That is so awesome. And to have my daughter be a part of it, that's extra special."