WWII pilots on a mission to bomb Japan practiced over Lake Murray in South Carolina; this is the story of Bomb Island 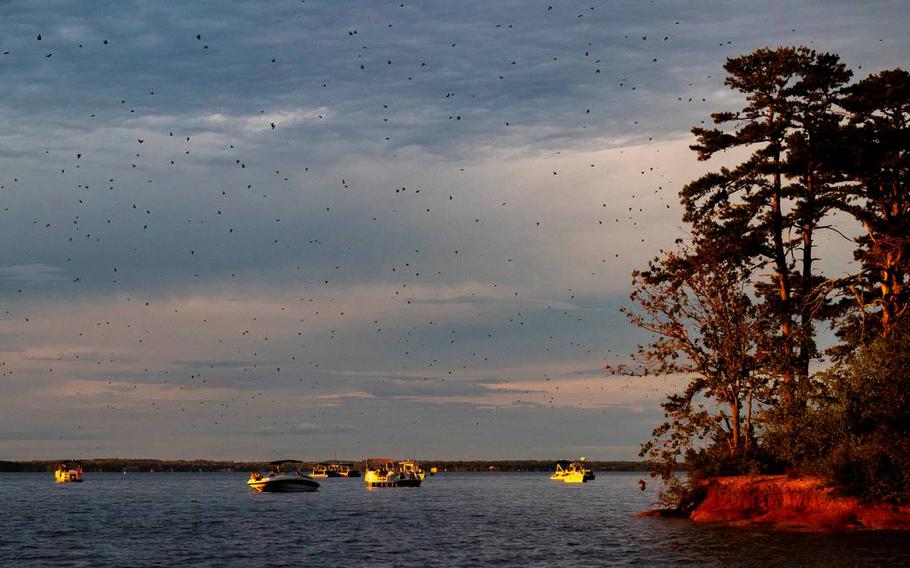 Boaters congregate around Bomb Island in Lake Murray to observe the Purple Martins flocking to roost. The birds were first noticed roosting on the island in 1988. (Tracy Glantz, The Island Packet/TNS)

COLUMBIA, S.C. (Tribune News Service) — In the middle of Lake Murray sits a piece of land that holds a large history behind it.

In early 1942, the United States planned a mission to boost the country’s morale just months after the Japanese bombed Pearl Harbor and brought the U.S. into World War II. The U.S. planned to bomb Japan by launching B-25 bombers from an aircraft carrier.

Pilots on the mission began practicing for it over Lake Murray, specifically today’s Doolittle Island, which is named for Lt. Col. James Doolittle, who led the mission. At the time, the pilots were stationed at Columbia Army Air Base, site of today’s Columbia Metropolitan Airport.

Although the men operated military planes and machinery, the living conditions at the base were lacking, historian JoAnn Zeise explained.

“The conditions weren’t good. Apparently, some of them were living in tents,” Zeise, curator of history at the South Carolina State Museum, said.

Soldiers on the mission were volunteers from the 17th Bombardier Group who joined the raid not knowing what they were signing up for. The airmen were only aware of what was to be done while they were en route for Japan, according to historical sites.

“These men and their personal stories of courage are so inspiring. It’s a great story to share about these people who volunteered to put their life on the line for their country,” Zeise said.

After a couple of weeks, Doolittle’s men transferred to Florida.

Even though they had a short stint in South Carolina, they still felt connected to the Midlands, according to Zeis. For years, the Doolittle Raiders held annual reunions, including several in Columbia.

“They were there to share many stories of their experiences and talk about what an honor it was to serve their country,” Zeis said.

Throughout the war, B-25s conducted practice runs over the island.

Five of the planes ended up crashing into Lake Murray. Four were recovered.

One of the recovered B-25 bombers is on display at the South Carolina State Museum.