From the archives, 1966: Variety’s the Spice of Candy’s Life 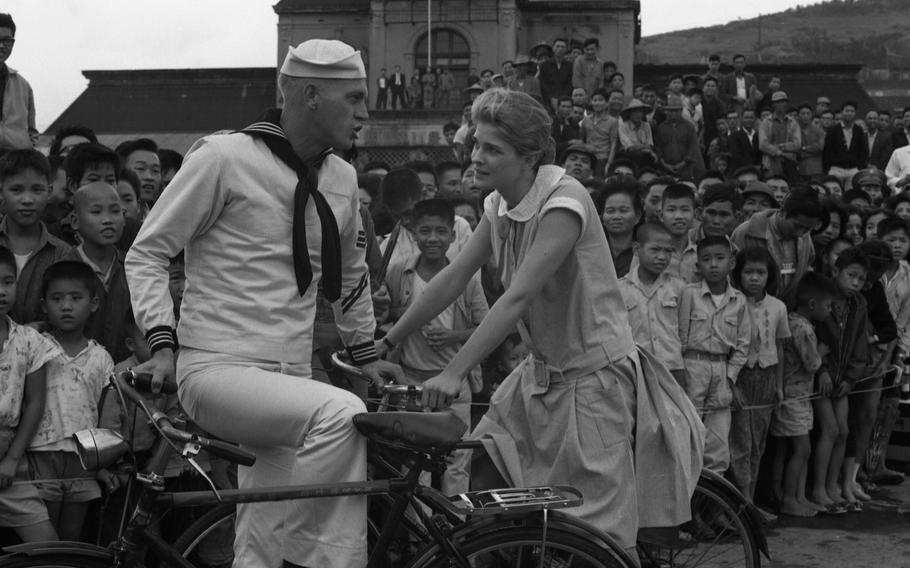 Steve McQueen and Candice Bergen during a lull in shooting “The Sand Pebbles” in the Port of Keelung, Taiwan, Nov. 29, 1965. (Andrew Headland Jr./Stars and Stripes)

This article first appeared in the Stars and Stripes Pacific edition, Feb. 6, 1966. It is republished unedited in its original form.

A career as an actress would seem to be a natural profession for the daughter of comedian Edgar Bergen. Especially for one as young, talented and beautiful as Candice Bergen.

But on a set of "The Sand Pebbles," which she is making in Taiwan with Steve McQueen, Miss Bergen disclosed that she has two additional professional goals. Neither has anything to do with stage or screen.

One is photography. The other is writing.

Nor is either goal an idle dream for the talented young actress who achieved star status even before release of her first movie, "The Group."

An article she wrote about her experiences making "The Group" appeared in the December issue of Esquire magazine. Entitled "What I Did Last Summer," it presents candid portraits of seven actresses in the film. Illustrated with Bergen photographs, the account bears evidence that each of the actresses is fully as individualistic as the screen character she portrays.

"I am afraid it is pretty candid," said Miss Bergen. 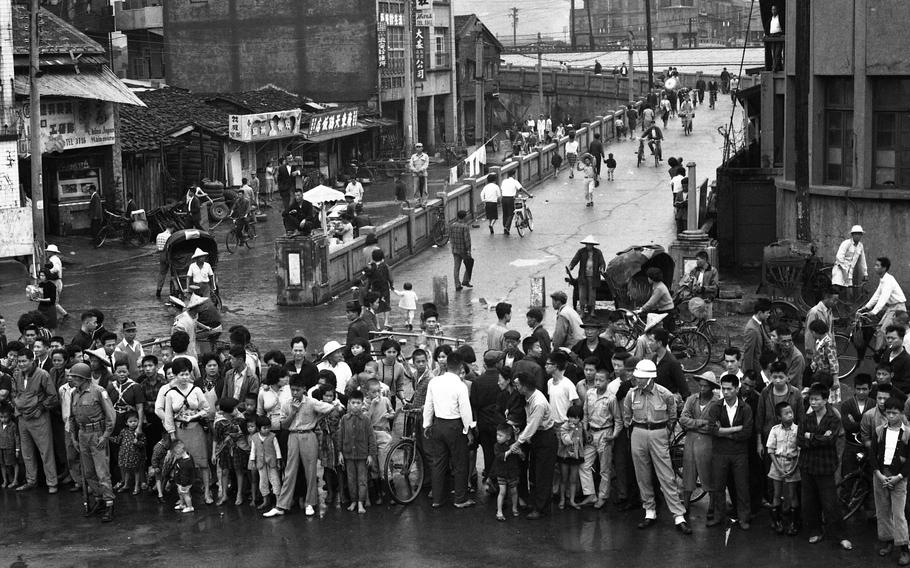 Curious onlookers stand on the perimeters of the “The Sand Pebbles” film set in the Port of Keelung [now Keelung Harbor] on Nov. 19, 1965. The movie — directed by Robert Wise, who had just won an Oscar earlier that year for “The Sound of Music” — stayed in Taiwan for three months. (Andrew Headland Jr./Stars and Stripes) 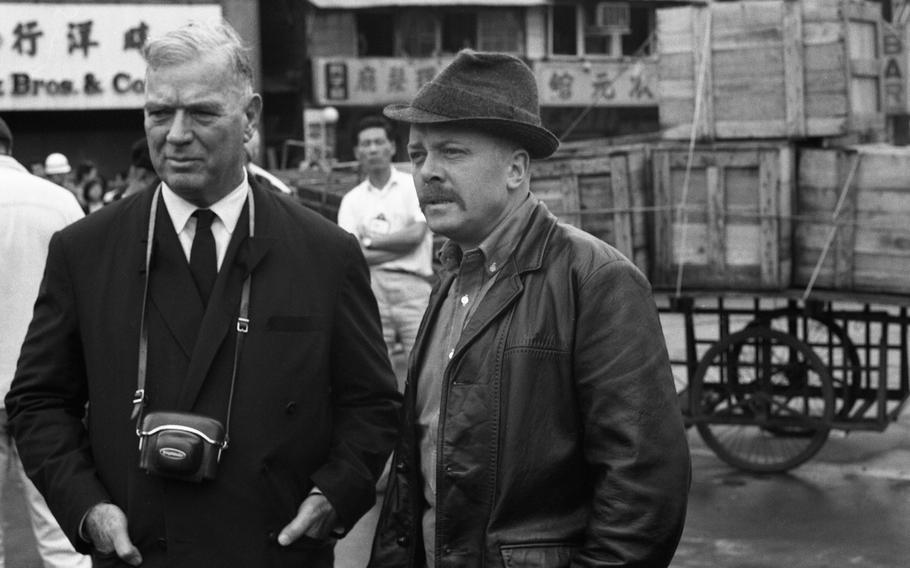 General James Van Fleet (left) with actor Richard Attenborough on the set of “The Sand Pebbles,” in the Port of Keelung, Taiwan, Nov. 29, 1965. (Andrew Headland Jr./Stars and Stripes) 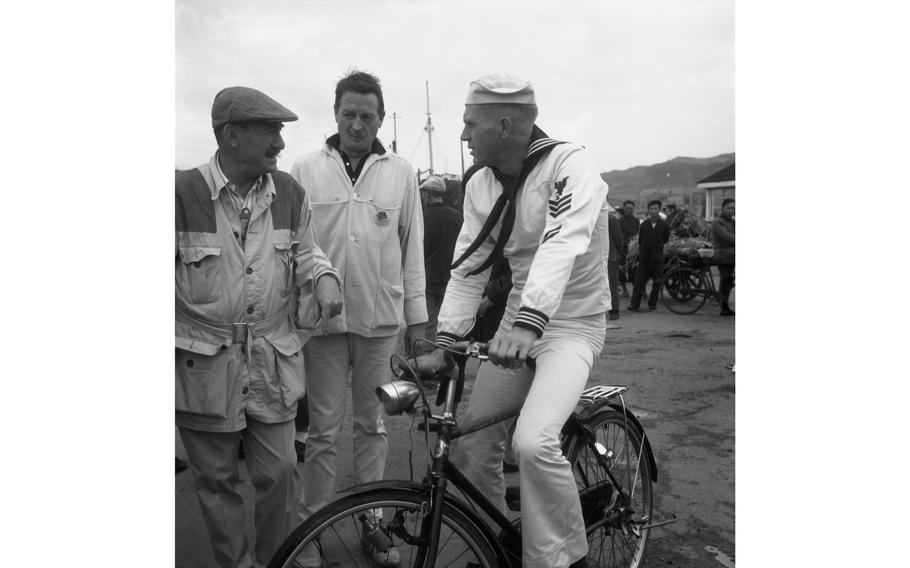 Steve McQueen with members of the production cast on “The Sand Pebbles” film set. (Andrew Headland Jr./Stars and Stripes) 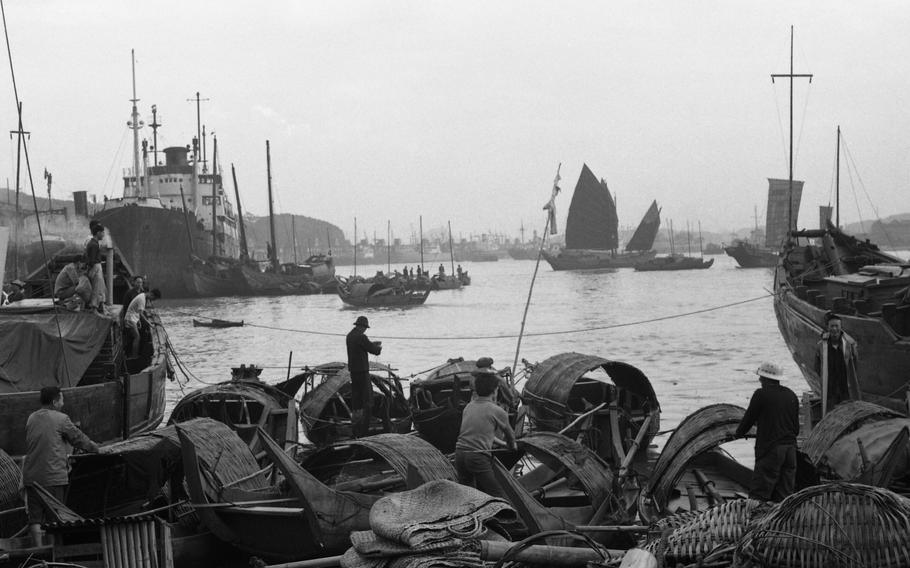 Film crew transforms Taipei: The Port of Keelung (now Keelung Harbor) was made to resemble Shanghai circa 1926 for filming of “The Sand Pebbles.” The film crew stayed on Taiwan from November 1965 through January 1966. (Andrew Headland Jr./Stars and Stripes) 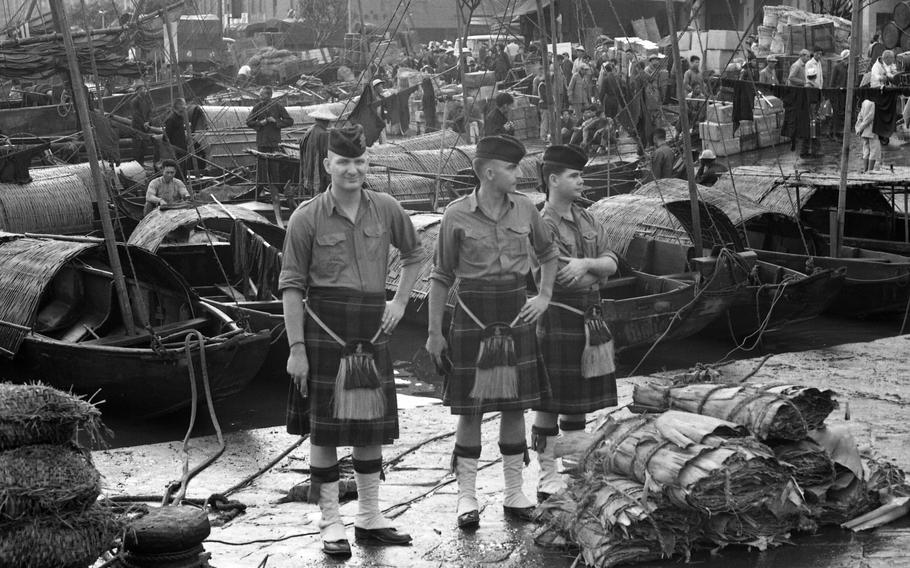 A play she wrote, subject undisclosed, is being considered for production on Broadway. Additionally, Miss Bergen has co-authored a photographic essay on the South and is now turning her pen and camera to new subjects in Taiwan.

During her interview with Pacific Stars and Stripes it was evident that Miss Bergen also yearns for a chance to work as a war correspondent in Vietnam. Screen commitments, however, are likely to keep her from tackling this job. She is signed to do approximately nine films for Hollywood studios after finishing "The Sand Pebbles," which is based on the best seller by Richard McKenna.

But, she noted, at least one member of the Bergen family — her father — went to Vietnam in January to entertain the troops.

As to assisting the war effort in Vietnam, Miss Bergen said: "I'd be a good public relations man for the troops and I wouldn't want the VIP treatment, either. I have a great sense of pride in our military. I feel the troops in Vietnam are doing more than fighting to win the war; they are fighting to win the people and the peace. They are like a military peace corps."

Miss Bergen speaks with sincerity and her remarks fly out with electrical emphasis. But she was in a relaxed mood as she talked. She laughed when Steve McQueen opened the door of the conference room — it was lunch time — to tell her where the peanut butter they had been hoarding could be found.

Miss Bergen describes McQueen as "a very nice" person, encouraging to and considerate of his fellow actors, especially someone new to the business. She had compliments, also, for British actor and producer Richard Attenborough, TV star Richard Crenna, other members of "The Sand Pebbles" cast and for Robert Wise, who is directing the $8.5 million production.

Miss Bergen's role in "The Sand Pebbles" is in direct contrast to her role in "The Group," the film version of Mary McCarthy's controversial novel. In "The Group" Miss Bergen is the sophisticated Lakey Eastlake, leader and nucleus of her 1930 social set. In "The Sand Pebbles" she is a missionary schoolteacher who finds love and adventure on the Yangtze River in China during the gunboat era of the 1920s.

The diverse roles show her versatility as an actress and indicate why she is likely to continue being busy with studio work for a long time. 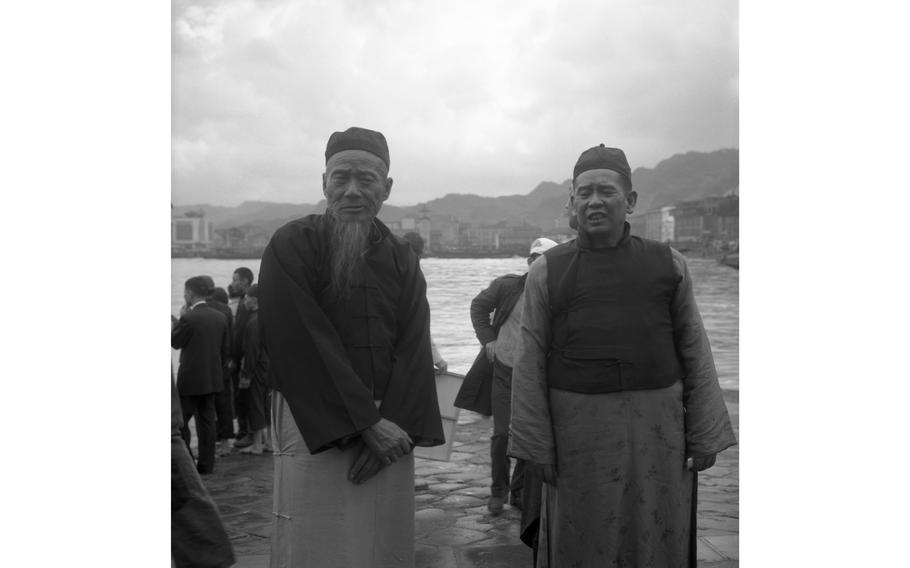 Extras on the film set of “The Sand Pebbles.” Taiwan’s Port of Keelong was made to resemble Shanghai circa 1926 for the filming of the movie. (Andrew Headland Jr./Stars and Stripes) 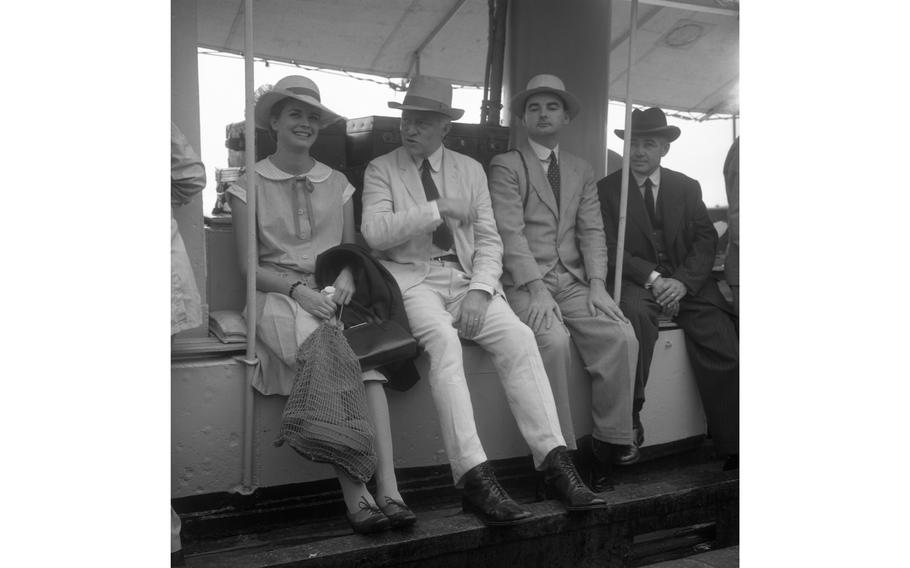 Candice Bergen sits next to actor Larry Gates during filming of “The Sand Pebbles.” (Andrew Headland Jr./Stars and Stripes) 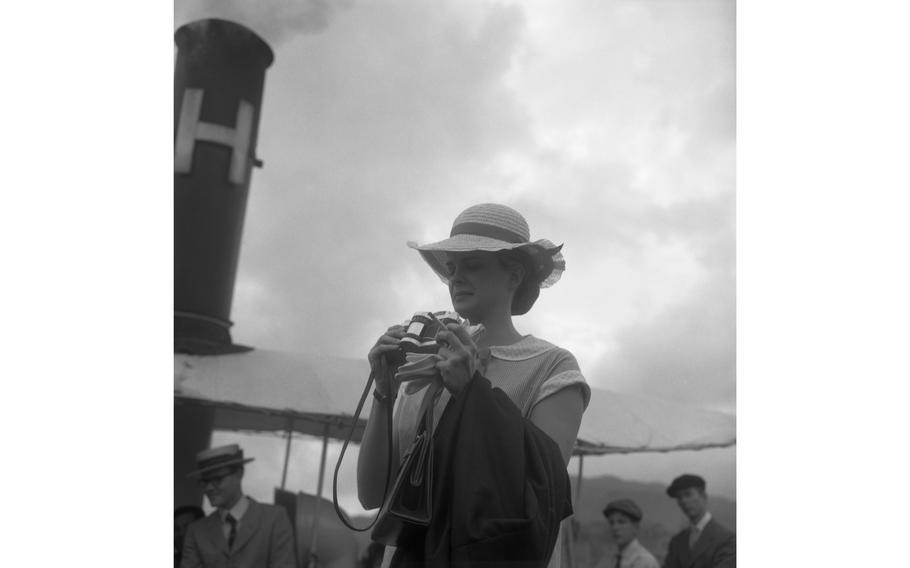 Candice Bergen taking pictures on “The Sand Pebbles” film set in the Port of Keelung, Taiwan, on Nov. 29, 1965. (Andrew Headland Jr./Stars and Stripes) 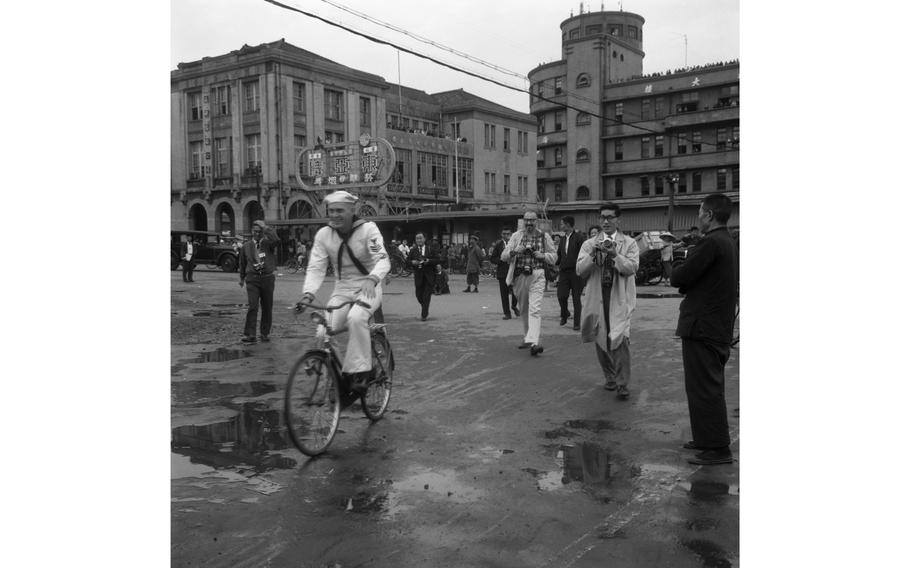 Steve McQueen riding a bike between takes on the set of The Sand Pebbles at Port of Keelung, Taiwan. (Andrew Headland Jr./Stars and Stripes)

Shooting on "The Sand Pebbles," an Argyle-Solar production for release by 20th Century Fox, started on Taiwan in November and continued through January. Additional scenes are to be made in Hong Kong, Hollywood and Texas.

The long stay on the island is providing Miss Bergen with many opportunities for sightseeing when she is not studying her lines or before the cameras. She was looking forward to finding camera subjects in mountainous Taroko Gorge on the east coast; to trips to Quemoy, the Pescadores and, if possible, to remote Orchid Island.

She likes visiting out-of-the-way places that tourists seldom see. One day, for example, she observed operations at a Taipei soup kitchen run by Father Walter P. Morse, an Episcopalian missionary and Old China Hand — the "Happy, Happy Beggar" of John Hersey's classic story which appeared in "The New Yorker Magazines" in 1940 when Hersey visited China.

"One of the nicest days I have ever had," Miss Bergen summed up her visit with Father Morse.

She has no present thought, she said, of returning to the University of Pennsylvania, where she was a sophomore art and history major during the 1964-65 school year.

While still going to school she made trips to New York where she modeled clothes at $300 a day — tops in the profession.

She admitted to nostalgia for New York, where her success began and where she has an apartment decorated with an antique carousel horse and a ragged lion skin rug which she imaginatively describes as a "sausage with feet."

Want to read our coverage of other movies being filmed throughout the decades in Europe and the Pacific? Subscribe to Stars and Stripes’ historic newspaper archive! We have digitized all of our 1948-1999 European and Pacific editions, as well as several of our WWII editions and made them available online through http://starsandstripes.newspaperarchive.com/