From the archives, 1943: Paratroopers were ready when zero hour came 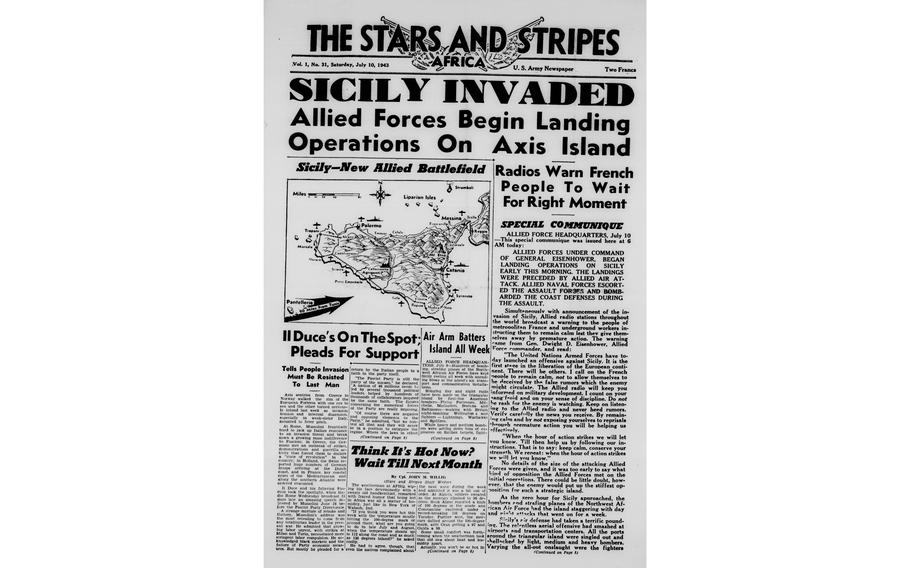 The front page of the Mediterranean, Algiers edition of Stars and Stripes from July 10, 1943, announcing the start of the invasion of Europe by the Allied forces that day. Several days later, on July 12, the paper would print an account by its combat correspondent Jack Foisie describing the final preparations of the paratroopers taking part in the invasion. (Stars and Stripes)

This article first appeared in the Stars and Stripes Mediterranean — Algiers edition, July 12, 1943. It is republished unedited in its original form.

Stars and Stripes reporter Jack Foisie was awarded the Legion of Merit for his combat reporting on the 1943 invasion of Sicily. To read more about the infantryman turned combat reporter, read Nancy Montgomery’s 2017 profile.

AN ADVANCED AIR FIELD IN NORTH AFRICA, July 9 (Delayed) — This is the eve of the day and American paratroopers, who will be landing amid the enemy even before the hour, have gathered for the takeoff. This is the moment they have long awaited. A year of the most concentrated training is behind them. Many of them will have their first taste of war — the toughest kind of war — the invasion of Europe.

The men are lounging in the shadow of the wings of the giant transports which will carry them over the black Mediterranean to the carefully designated dropping zones.

Their mission is to take enemy airdromes, to take them and hold them until the seaborne land forces reach and relieve them. Their mission the paratroopers had known for several days. They had studied their maps and memorized their orders and completed their coordinated plans, but it was not until this morning at reveille that they were told “tonight is it.”

There were cheers at the announcement and at least one good crack from the ranks. “Hurrah, no more C rations.” The men carried ‘K’ and ‘D’ rations into battle.

Throughout the day the men checked and packed their gear and equipment. Each of the many pockets of their jumping suits were utilized. The natty jumping boots, trademark of the profession, were laced with extra tightness.

The bivouac atmosphere remained business-like and grim. No horseplay, no heroics, no boasts, no doubts. The Yanks were ready and confident. The tenseness mounted as the time grew short.

And now the sun was going down behind the Tunisian djebels where just two months ago the foe had fought his last round in North Africa. The evening breeze, stirred by the cooling of the hot earth, was picking up the sand off the runway, enveloping the field in a brown haze.

The colonel, who would lead his combat team into action, was giving a last minute briefing to the enlisted men, officers and one war correspondent who would ride and jump with him. His plane was numbered 00 and bore the emblem of the mighty eagle of war.

It was a sacred huddle, this briefing. The generals and staff officers who had come to wish them luck stood off to the side. It was a strange and fascinating sight, the men with their faces blackened, the American flag freshly sewed on their sleeves, gathered at the feet of their commander.

The colonel, tallest of them all, his lean face more liberally smudged with blackening, the darkest of them all, spoke his final commands: The stowing of equipment; no smoking while in flight; the appointed rendezvous; the time of departure; the time of replacing the “Mae West” with the chute; the time over the dropping zone.

He outlined their procedure after hitting the ground. His words were calm and cool and direct. The time for pep talks had passed. Operations had started.

Cloth maps were issued to each man. The pass word was announced.

“And you’d better get it in a hurry,” the colonel added. “for there are going to be a lot of itchy trigger fingers.”

The briefing was over. The time for takeoff would be 2055. The men had a few minutes left for a smoke, a drink of water and a little talk.

There were 13 enlisted men going in the lead plane. I asked everyone the same question: “How do you feel about it?”

Capt. Nickolas Kastrantas of Pittsburgh, Pa. said, “I feel better than I have for a long time. You see, this is taking me closer to home. My folks are in Athens, Greece, and I spent most of my life there.” He paused, then added, “say can you put my nickname “baby” in there. That is the first English word I learned.”

Pvt. David Mckeown, of Philadelphia, said: “I’m rarin’ to go. I’m all on edge, and my nickname, if you want to use it, is Dandy Dan.”

Pvt. Louis Mendieta who has no home town said: “I can live anywhere in a free land. I might someday want to live in Sicily. So I figure we’d better get going.”

Sgt. Jack Gavin, of Lincoln, Neb. said: “We’re going in with him so everything is going to be alright.” Sgt. Gavin is the combat team’s operations man.

Pvt. Nalty R. Keen, of Brookhaven, Miss.: “I’ve been waiting 12 months for this. Say, will the folks back in the states read your story — If something does happen, I’d like them to know.”

Cpl. Doug Gabriel, of Richmond, Cal.: “I want to get it over with — The quicker the better.”

Pvt. Willie Snowden, of Miami, Ariz.: “I haven’t jumped in some time, so I’m overdue. I don’t know how I feel, bit I will when I jump.”

No. 13, S-Sgt. Bob Gillette, of Lewiston, Idaho celebrated his 23rd birthday today. “We’ll give hm Sicily for a birthday present,” chuckled some of the others.

These were the 13 enlisted men who would jump with the colonel. Other officers in the commander’s plane were Lt. Col. William T. Ryder, the “father of American paratroops” who was going along as an observer; Maj. Benjamin Vandervoort, the combat executive officer and Capt. A. W. Ireland, the adjutant.

Jack Thompson, correspondent for the Chicago Tribune, who had jumped with Col. Raff in Tunisia, was also going.

Then men drew their last puff of smoke, tightened the chin straps on their helmets and climbed aboard. One by one they disappeared into the cabin. Their commander saluted the assembled group and then he too climbed inside.

The plane was piloted by Col. Jerome C. McCauley, of Dento, Tex. His co-pilot was Capt. Albert Fahy, of Rome, Ga. Upon their skill depended the initial success of the mission.

It was dusk. The wind still blew. From all the darkening corners taxied the transport planes. The colonel’s plane raced its engines, then throttled them down. On the take off it rose gracefully like a giant bird and tucked its leg under its body.

One by one the others nosed through the dust clouds and rose into the night air in smart formations of three. Each of the transports circled the field waiting until the rendezvous was complete.

Fighters hovered above them and above the fighters passed wave after wave of bombers.

It was a mighty armada, the greatest air fleet ever assembled. The sky was filled with planes as far as the eye could see. In the twilight the red and green wingtop lights clustered and sparkled like a miracle Christmas tree. And then the mighty formation swung north.

The liberation of Europe had begun.

Want to read more of Stars and Stripes’ WWII coverage? Subscribe to our historic digital archive at https://starsandstripes.newspaperarchive.com/. There you will find several of our WWII editions, namely the Northern Ireland edition, the London edition, as well as the 17 editions published in the Mediterranean theater (including the Algiers edition the above article was published in). The digital archive also contains our Europe and Pacific editions from 1948-1999.