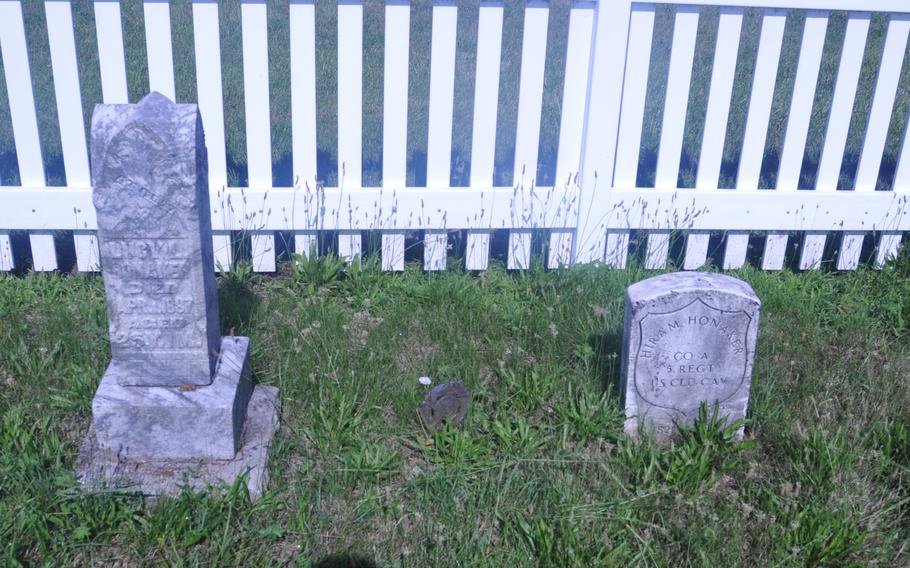 The grave marker for Hiram Honaker and his family — the only U.S. veteran buried on Wright-Patterson Air Force Base. (Sandy Simison/U.S. Air Force)

(Tribune News Service) — Some 134 years after he was buried on what once was a Greene County family farm, one of the nation’s biggest Air Force bases respectfully tends to the grave of U.S. Army Pvt. Hiram Honaker.

Just south of state Route 235 on Wright-Patterson Air Force Base’s Area A, the Air Force is the careful custodian of the grave of Honaker, an African-American Union Army veteran who served in Company A, 5th Regiment in what at the time was called the U.S. Colored Calvary. He is the only military veteran buried on Wright-Patterson, said Steven Byington, the 88th Civil Engineer Group’s cultural resources manager.

Honaker was buried in 1888 in what was then a family cemetery in the village of Osborn. Today, the plot is a small patch of grass near the north end of a base runway south of Loop Road, a brief drive from the base’s air traffic control tower or its commercial traffic entry gate to the east.

The original gravestone was unreadable when it was replaced in 1971. Henry Gonzalez, a congressman from San Antonio, Texas, asked the Army to provide a new stone when he read about Honaker in a news story.

“That’s sort of in perpetuity,” Byington said of the base’s custodianship of the cemetery. “This is part of our history, and we’re cognizant of the history of this area, (the village of) Osborn and all the different families who gave up land for the Air Force base.

“It’s something we take on as a serious part of our mission.”

Osborn was the village that was physically moved — ”roof and rafter” as local historians put it — in the early 1950s in a merger with Fairfield, forming what today is the northwestern Greene County city of Fairborn.

The 445th Airlift Wing’s C-17 Globemasters regularly roar above the cemetery. The wing’s hangars are a short walk away.

Byington said the cemetery is the resting place to some 80 people, but only 45 grave markers are in place. The rest have been lost to floods, weather and the ravages of time.

Motorists passing by on Chambersburg Road may be able to just make out a black fence surrounding the markers and monuments.

“I think there are a lot of folks who have driven by and sort of seen something out here,” Byington said. “They wonder what the fence is. It’s hard to see the monuments from the roadway.”

But those familiar with Fairborn’s history and local genealogy may know something of the cemetery, he said.

The son of enslaved people in Kentucky, Honaker has a humble marker. Not much is known about him. He signed up for military service at the estimated age of 38 near Louisville, Ky., in 1864 as a private. His son, George, enlisted with him. He was honorably discharged, also as a private, in Arkansas two years later.

His service was primarily in Kentucky, Byington said. It is thought that he rode in cavalry raids of Virginia from Kentucky, most prominently against Saltville, Va., a major salt-producing area and a “highly contested Civil War site,” Byington said.

According to the National Park Service, the 5th Colored Cavalry held the captured Confederate works for more than two hours while running low on ammunition before withdrawing at dusk.

Of 400 soldiers engaged in the battle, about 114 enlisted men and several officers were killed or wounded, and the Park Service says “a significant portion” of Black soldiers were killed.

In the U.S. forces’ retreat from Saltville, a number of wounded Federal soldiers were left behind. Black troops left behind were “cruelly slaughtered” by Confederates, according to a Park Service account of the battle.

Honaker’s daughter, Lucy, is buried next to him, and it is thought that his wife, Rachel, is buried with him, although his gravestone does not reflect that.

Byington said Honaker moved north at some point and found employment on the farm of the Cox family, a wealthy family with property in Osborn and Clark County.