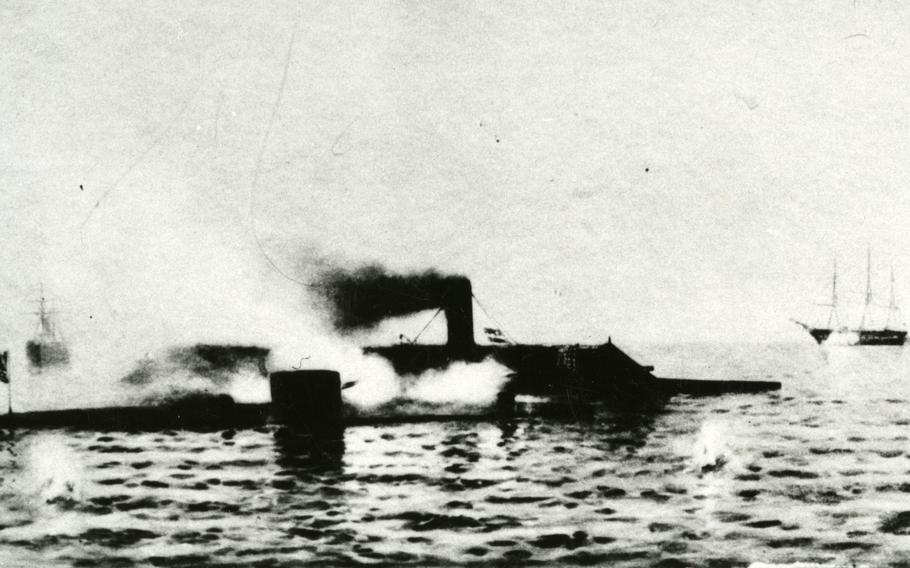 In this depiction of the Battle of Hampton Roads provided by Naval History and Heritage Command, USS Monitor and CSS Virginia fire on each other. Though the Monitor’s confrontation with the CSS Virginia ended in a draw, the Monitor prevented the Virginia from gaining control of Hampton Roads and thus preserved the Federal blockade of the Norfolk area. Months later, 16 sailors were lost when the Monitor sank, Dec. 31, 1862, in a storm off Cape Hatteras, N.C. Her wreck was discovered in 1974 and is now a National Marine Sanctuary. (Naval History and Heritage Command)

(Tribune News Service) — One of the nation’s most revered military shipwrecks was visited in May by a NOAA-backed team and they made a surprising discovery 16 miles off North Carolina.

The Civil War ironclad USS Monitor is apparently refusing to surrender to the forces of nature.

Despite being on the seafloor since 1862, the first-of-its-kind ship remains in “an excellent state of preservation,” according to Tane Renata Casserley, resource protection and permit coordinator at the National Oceanic and Atmospheric Administration’s Monitor National Marine Sanctuary.

That’s all the more surprising given Navy divers made significant intrusions into the shipwreck in 2002, when they recovered the highly prized turret and other artifacts for preservation, he said.

“The wreck is in an astounding condition after being on the seafloor for 160 years and weathering all of the environmental conditions off Cape Hatteras, including exceedingly strong currents and hurricanes,” Casserley told McClatchy News.

“During those (2002) projects, it was necessary to cut into the ironclad’s armorbelt, hull, and deck to gain access to the turret since the shipwreck was on top of it. The question for us at NOAA was, did those cuts into the shipwreck cause further deterioration? Would we see significant changes caused by these actions today?”

The answer to those questions “was a resounding ‘No,’” he said.

It’s a revelation that begs explanation, and Casserley has a theory.

The USS Monitor was visited as part of the Valor in the Atlantic expedition, which sent a remotely operated camera to explore multiple ships sunk during the Civil War and World War II.

The USS Monitor was the oldest and most important of them, as the first U.S. warship built with a revolutionary rotating gun turret, NOAA reports.

Monitor sank on New Year’s Eve in 1862, in a region off North Carolina known as the Graveyard of the Atlantic, due to an estimated 2,000 shipwrecks. Sixteen U.S. sailors were lost in the sinking, historians say.

“The waves grew and the wind howled. With each pitch and roll, shock waves ravaged the crew and the hull of the little ship,” according to a NOAA report.

“Leaks developed, flooding the engines and reducing steam pressure needed for propulsion. The crew tried using pumps and even bailing with buckets, but the distress was too great. … The turret was the only escape hatch from below and as the men attempted dashing across the deck many of them were swept into the unknown by the treacherous waves.”

The Monitor was rediscovered in 1973 — “lying upside down in 230 feet of water” — by the Duke University Research Vessel Eastward and efforts to protect the first-of-its-kind vessel began almost immediately, NOAA reports.

In 1975, the USS Monitor site became “the nation’s first national marine sanctuary,” a move that intends to protect and preserve it as an important part of the “nation’s maritime heritage.”

The state of preservation

The Valor in the Atlantic expedition May 15-25 counted as “the first examination of the site” since 2002, and Casserley feared it would show the turret recovery project led to advanced deterioration.

Finding otherwise has left the scientists looking for explanations, and Casserley thinks the “robustness of Monitor’s construction” continues to defend it.

“That same iron armor that deflected cannonballs fired at point blank range and even collisions … has now contributed to its longevity on the seafloor,” Casserley says.

“That same iron hull and armorbelt built to withstand the rigors of war, has now enabled Monitor to provide a stable habitat in its new role as an island of life. It truly was incredible to see the transformation at the bottom of the ocean. There was often so much marine life on Monitor it was difficult to see the shipwreck itself.”

A remotely operated camera examined only the exterior, so questions remain about the what’s happening inside of the vessel, he said.

The expedition team, which partnered with the Global Foundation for Ocean Exploration, left the wreck realizing much of it remains unaltered, offering an extraordinary opportunity for marine archaeologists and historians.

“This area is a time capsule back to 1862 to learn more about how the crew lived and worked aboard a prototype ironclad warship,” Casserley said.

“In some regards is in better structural shape than the majority of shipwrecks from the same time period as well as extending to the WWII-era shipwrecks. The bottom line is USS Monitor will be here for generations to come to share its stories of heroism.”