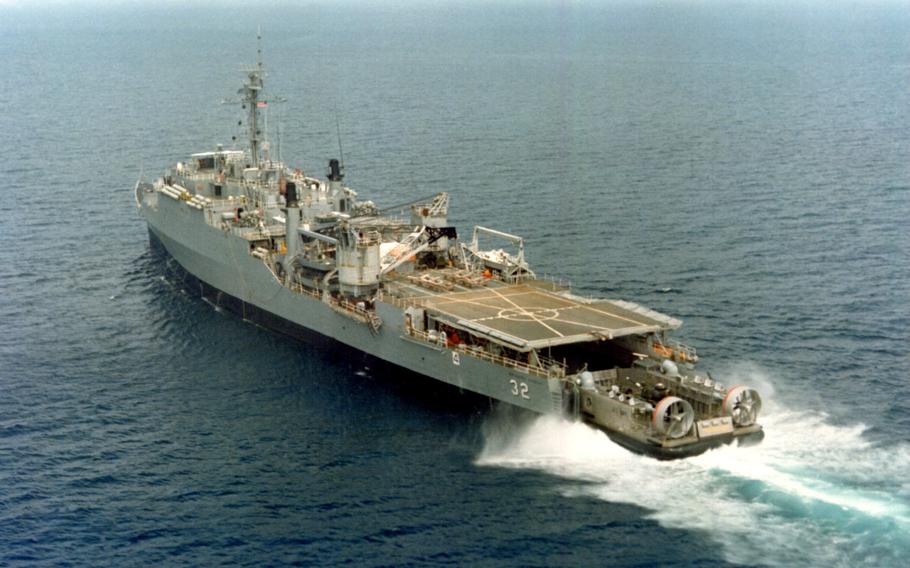 (Tribune News Service) — Scuba divers worldwide waited with anticipation for the sinking of the USS Spiegel Grove in the spring of 2002.

Once on the bottom of the sea off Key Largo, the 510-feet long Cold War-era U.S. Navy troop and equipment transport ship would be the largest vessel intentionally sunk to create an artificial reef for divers and sea life.

Local dive operators like Spencer Slate and Rob Bleser, and noted underwater photographer Stephen Frink, had been working behind the scenes for almost 10 years trying to procure the ship in hopes it would become a Florida Keys underwater attraction.

“It was a wonderful ship, and so we said, ‘This is the one. Now we have to find a place to sink it.’” Frink said during a presentation in Key Largo this week on the sinking held 20 years ago.

The mission was eventually accomplished. But the Spiegel Grove’s journey to the ocean floor was fraught with obstacles, mishaps and adventures.

“It is a story that you couldn’t make up,” said Dave Score, a retired rear admiral with the National Oceanic and Atmospheric Administration, who, at the time of the sinking of the Spiegel Grove, was Upper Keys manager of NOAA’s Florida Keys National Marine Sanctuary.

The 6,880-ton ship was delivered from the James River Reserve Fleet in Virginia, where it had sat mothballed since being decommissioned in 1989. It arrived in Key Largo in May 2002.

It arrived off the coast of the Keys early. On May 17, 2002, at 2 p.m., the Spiegel Grove sank prematurely in 130 feet of water, “turned turtle,” meaning it rolled upside down, and settled with its stern settling on the sandy bottom and its bow sticking out from the surface of the ocean.

The situation had the too-real possibility of turning tragic. That’s because, moments before it was apparent the Spiegel Grove was going to go down much earlier than expected, 60 to 70 volunteers were on the vessel and they needed to get off quickly. With the help of boat and helicopter crews surrounding the ship, they were safely rescued.

“We got 60-plus people off the ship without a toenail scratch,” Bleser said.

For three weeks, the ship remained overturned and protruding from the water like a nagging monument reminding organizers that their job wasn’t done. It was also a hazard to navigation, the Coast Guard told them.

Then, on June 10, a Fort Lauderdale marine salvage company, Resolve Towing and Salvage, pumped enough air into the port side hull to displace 2,000 tons of water. That, with the help with air bags containing up to 400 tons of buoyancy and two tug boats was enough to bring the entire ship to the bottom.

There was still a problem, however. Instead of sinking top side up, the ship listed on its starboard side. Several efforts to right it failed, and it was decided among the project organizers that it would have to stay that way.

Bringing the Spiegel Grove from Virginia to the Keys and preparing it to be scuttled came with a price tag of $1.1 million. An additional $250,000 was spent to sink it after the first attempt failed. Most of the money came from the Monroe County Tourist Development Council, said media relations director Andy Newman, who was one of the first people to take aerial photographs of the sinking operation.

Additional funding came from the sale of commemorative medallions and donations from local banks, Newman said.

Regardless of the ship’s position on the ocean floor, it was now a dive tourism hot spot, and the way it was situated on its side actually made it a uniquely apt home for the biodiverse marine life of the Keys. Instead of being a public relations disaster, the way the ship sank added to the Spiegel Grove’s mystique, said Joy Martin, who was president of the Key Largo Chamber of Commerce at the time.

During the Key Largo presentation this week, Martin told about a meeting the chamber board had in the days after the ship sank.

“But, instead of a meeting where everyone was fraught, everybody was coming up with solutions,” Martin said. “People all over the world were asking about the Spiegel Grove. They were following the story. It was a phenomenal time.”

In July 2005, Mother Nature would do what human engineering couldn’t accomplish. Strong currents and waves from Hurricane Dennis shoved the ship upright as the powerful storm churned east of Cuba.

Bleser said the amount of force below the sea that shock-waved to Key Largo was like “an underwater tsunami right up the reef line.”

Newman, Slate and Bleser all received calls from a dive crew who went out to the wreck after the storm moved on to the Panhandle saying that they think the ship was now upright. When Slate went out there and got in the water, he could sense right away something was different.

“It was a mud ball, so I knew something happened,” he said.

The dive crew that first noticed pleaded with Bleser to come out and take a look for himself.

Not a beginner’s dive

As intended, the Spiegel Grove is one of the world’s most valued dives among scuba enthusiasts, although the 10 people who have died while exploring the wreck since it was sunk are testaments to it not being a venture for novices.

It’s located about six miles off shore Key Largo near Dixie Shoals. Dive depths range from 60 to 130 feet, but mostly between 80 and 90 feet.

Launched in 1955, the Spiegel Grove was named after President Rutherford B. Hayes’ Ohio estate. Not only is it prized by divers, it has also become a diverse home to more than 130 species of fish, including goliath grouper, barracuda, large jacks and sharks.

Biodiversity on the ship

Lad Akins, then-executive director of a local conservation group called REEF, and now curator of marine conservation at the Phillip and Patricia Frost Museum of Science in Miami, was tapped to assess the sea life differences of the wreck site before and after the ship sank. About a month prior, Akins dove the site.

“And, if my recollection is right, we saw two fish at that site — a barracuda and a mutton snapper,” Akins said. “Otherwise, it was just a plain, barren bottom.”

Akins and his team also surveyed seven other adjacent sites, including some deep, coral rocks near the Spiegel Grove, and then Benwood Ledge, Red Can Ledge and Dixie Shoals Ledge and three other shallow sites.

“And those served as a reference for the wreck. And we got good baseline data. The ship went down and we were out there on the ship less than a month after it sank,” he said. “And already 46 species of fish had shown up on the wreck. And it progressed thereafter.”

Akins also said that he saw no evidence that the artificial reef served to deplete marine life from the natural coral reef.

“What we saw was a lot of fish moving out to the wreck and colonizing the wreck. On our reference sites, we did not see a noticeable decline,” Akins said. “So even though some fish may have moved from natural reef out to the wreck, it wasn’t enough to detect. It didn’t hurt the natural reefs, and the fish … continued to accumulate on the wreck.”

Although the Spiegel Grove remains one of the most popular dive sites in the Keys, it lost its spot as the largest ship intentionally sunk as an artificial reef in May 2006, when the USS Oriskany, a 911-foot long aircraft carrier, was downed about 23 nautical miles off Pensacola Pass in northwestern Florida.

The sinking of the Vandenberg cost a total of $8.6 million from planning to downing the vessel, and more than 10 years to plan. It rests on the bottom about 150 feet from the ocean’s surface.

Both Karen Berrios’ late father, William Py, and her uncle, Joseph Py, served in the Navy on the Spiegel Grove in the 1980s. She received her advanced diver certification so she could one day experience diving the ship.

Last Sunday, she helped install a plaque on the vessel that bears the names of Spiegel Grove veterans, including those of her father and uncle.

“So, when I went down, I was just trying to imaging myself kinda in my dad’s footsteps looking around,” Berrios said. “Did he step here at one point in time, just like I am today?”