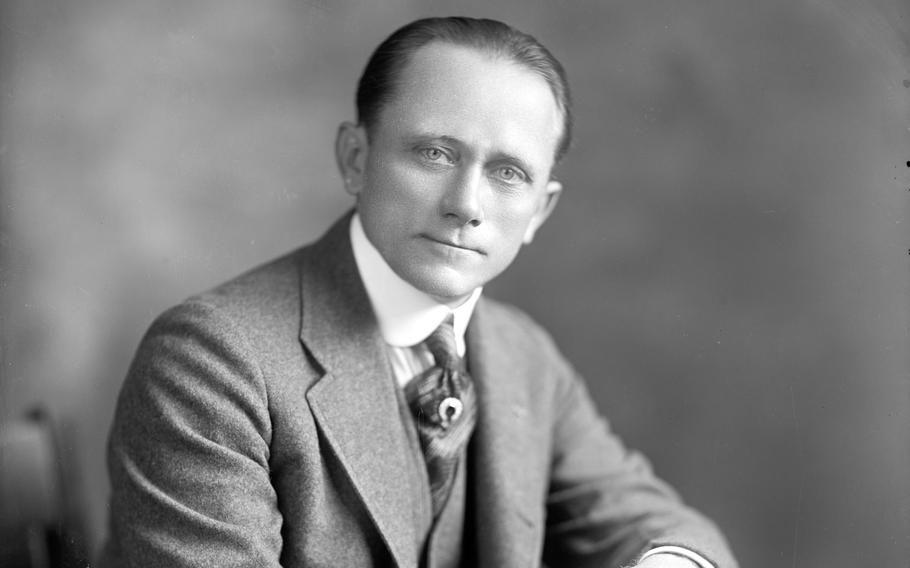 Theodore G. Bilbo, a Democrat, had twice been governor of Mississippi before he served in the U.S. Senate from 1935 to 1947, when “the growing intolerance among many whites toward public racism and anti-Semitism” led to his fall, according to an account in the Journal of Mississippi History. (Library of Congress)

Editor's note: A version of this story ran on Nov. 15, 2021, under the headline "Long before Charlottesville, 'great replacement theory' found its champion in a racist senator."

The man authorities say opened fire in a Buffalo grocery store Saturday, killing 10, appears to have left behind a white supremacist document centered on the idea of a plot to replace the white population with immigrants.

This far-right conspiracy theory, known as the "great replacement theory," has inspired a lot of recent violence, including the 2019 Christchurch mosque shootings in New Zealand, where the shooter warned of "white genocide." He later pleaded guilty to 51 murders, 40 attempted murders and engaging in a terrorist act.

Some of the torch-bearing "Unite the Right" demonstrators, including Ku Klux Klan members and neo-Nazis, who terrorized Charlottesville in 2017 were also motivated by the theory, which warns that an increase in the non-white population fueled by immigration will destroy white and Western civilization.

The Buffalo gunman, identified by authorities as Payton Gendron, an 18-year-old white man, is believed to have posted online a 180-page document arguing that white Americans were in danger of being replaced by people of color.

But while the great replacement theory has inspired horrific violence in the past five years, it's a lot older than that. More than 70 years ago, a U.S. senator published a book warning of the same destruction of white civilization.

Theodore G. Bilbo, a Democrat, had twice been governor of Mississippi before he served in the U.S. Senate from 1935 to 1947, when "the growing intolerance among many whites toward public racism and anti-Semitism" led to his fall, according to an account in the Journal of Mississippi History.

An equal-opportunity racist, he addressed some of his letters with slurs against Italians and Jews, depending on the recipient. But the bulk of his loathing and fear was reserved for Black Americans, as spelled out in his 1947 book "Take Your Choice: Separation or Mongrelization."

A showboater and self-promoter, he began the book with this modest preface: "For nine years I have read, studied and analyzed practically all the records and everything written throughout the entire world on the subject of race relations, covering a period of close on to thirty thousand years."

Bilbo saw an existential threat in the growing ranks of American-born descendants of enslaved Africans. His solution? Ship them back.

"The great civilizations of the ages have been produce[d] by the Caucasian race," he wrote. When Black people moved in, he wrote, mighty societies such as ancient Egypt were destroyed and mongrel races were created. "The mongrel not only lacks the ability to create a civilization, but he cannot maintain a culture that he finds around him," he wrote.

"A White America or a mongrel America — you must take your choice!"

Bilbo proclaimed in his book and in addresses to followers that he was "convinced, beyond every reasonable doubt, that our race is in jeopardy." It was a fact, he said in one campaign speech, using racial slurs, that at "the present rate of interbreeding and miscegenation and intermarriage between the [Black people] and the whites, that in nine generations, which is only 300 years, there'll be no whites, there'll be no Blacks in this country. We'll all be yellow." Or brown, he added.

He rebutted experts who disputed any scientific basis for racism. Of Franz Boas, often called the father of American anthropology, he wrote, "For some reason which has never been publicized, this German Jew, a newly-arrived immigrant, wanted to destroy the racial stock which had carved this mighty Nation out of a wilderness." Bilbo recommended deportation for another academic, a naturalized Italian immigrant, who suggested intermarriage could dissolve the color line.

Though he claimed "no hatred or prejudice against any human being" in the preface to his book, he went on to say that he "would rather see his race and his civilization blotted out with the atomic bomb than to see it slowly but surely destroyed in the maelstrom of miscegenation, interbreeding, intermarriage, and mongrelization."

But the times were changing, even in Mississippi. Black veterans returning from fighting in World War II didn't take well to efforts to bar them from voting in the United States. And the Allies' fight against Adolf Hitler and antisemitism had led many Americans to turn their critical gaze to discrimination at home.

As Robert L. Fleegler noted in the Journal of Mississippi History, most criticism of Bilbo in the press had come from liberal publications. But as Bilbo started campaigning for reelection in June 1946, the conservative and influential Saturday Evening Post published a cover story under the headline "Bilbo: America's Worst Demagogue Runs Again." The story called Bilbo "America's most notorious merchant of hatred."

The politician nicknamed "The Man" was fighting to retain his Senate seat. He told supporters that "the Negro Council in Chicago sent a telegram to Harry Truman, the president, saying to send the Army down to Mississippi and to see to it that these 100,000 [Black people] are gonna vote," using a racist slur. He also urged "every red-blooded white man to use any means to keep the [Black people] away from the polls. And if you don't know what that means, you are just plain dumb." He fought fiercely against his critics, hurling anti-Jewish and anti-Black slurs at detractors in the press. He won the Democratic primary that July and ran unopposed in the general election.

But growing opposition to his race-baiting demagoguery continued to build. Bilbo's admission in August 1946 on "Meet the Press" that he was a member of the Ku Klux Klan probably didn't help.

There were calls to oust Bilbo, including from veterans groups and the Committee of Catholics for Human Rights, which called Bilbo's conduct "a chilling deterrent to the world-wide belief that America is the symbol of democracy and human rights." They were joined by politicians, including New York's Democratic senators and a state senator whose son was killed in World War II, who said, "I hate and despise those bigots" like Bilbo.

On Sept. 19, 1946, an interracial group of Mississippians filed a complaint with the U.S. Senate Committee to Investigate Campaign Expenditures, asking that Bilbo be removed from office.

The committee "heard from more than 100 witnesses — two-thirds of them Black — who outlined local election practices that systematically restricted black registration and voting," according to a Senate history. Witnesses told of being turned away, threatened with pistols, beaten and arrested.

A slim majority of the committee found in favor of Bilbo, however, and blamed some of Bilbo's anti-Black campaign on concerns about "outside agitators," including the national media.

But Bilbo's opponents had another card to play.

A second investigation by the Senate war investigating subcommittee heard testimony on charges that Bilbo had helped construction firms win government contracts and had accepted gifts in return that included a Cadillac, a swimming pool and the "excavation of a lake to create an island for his home," according to a Senate summary.

During the investigation, questions also arose about whether Bilbo was pocketing money in return for allowing a drug addict access to morphine. Bilbo had obtained consent from the Federal Bureau of Narcotics to allow a Mississippi doctor to prescribe the drug. The drug recipient told an Internal Revenue Service special agent that he paid Bilbo $1,000 for the favor, according to the New York Times.

In January 1947, with Republicans in control of the Senate, a fight ensued over whether Bilbo would be allowed to take his seat, with Southern Democrats threatening to stop the Senate from organizing if he were barred.

Then fate intervened. Senate Minority Leader Alben Barkley (D-Ky.) announced that Bilbo would return to Mississippi for oral cancer surgery. He died on Aug. 21, 1947, without retaking his Senate seat.

Bilbo's career built on racism and anti-immigrant bigotry had ended. But the bigotry lingers on.