After 77 years, the US Army replaces a woman’s birthday cake while commemorating a victory in Italy 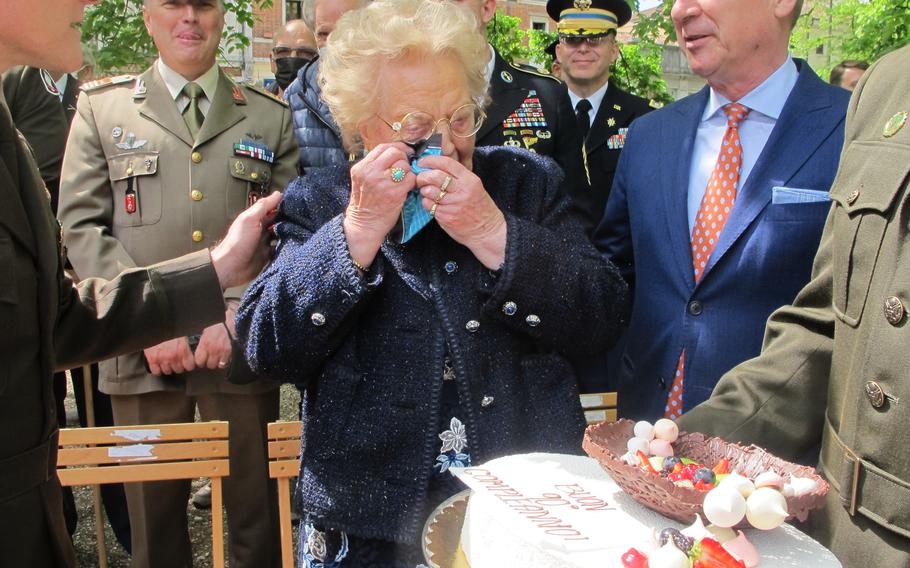 Meri Mion of Vicenza, who was 13 on the day 77 years ago when U.S. soldiers arrived in the city, liberated it from the Germans and then took her birthday cake, cried when the cake was replaced by U.S. Army Garrison Italy at a ceremony, April 28, 2022. (Nancy Montgomery/Stars and Stripes)

Then they liberated a teenager's birthday cake.

Those events were commemorated Thursday in a leafy park adjacent to that same street, with military dignitaries, U.S. sergeants, priests, mayors, well-wishers and the formerly 13-year-old owner of the purloined cake, who turns 90 on Friday. 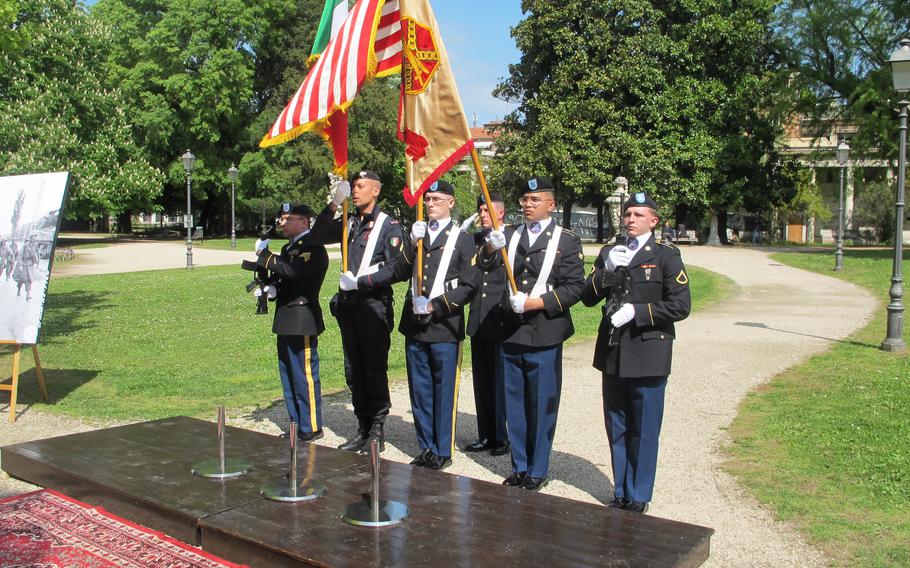 A color guard of U.S. and Italian troops takes part in a ceremony at the Giardini Salvi in Vicenza, Italy, on April 28, 2022. The ceremony marked the fighting that took place 77 years ago, and the sacrifices of U.S. service members who liberated the city 11 days before the war ended on May 8, 1945. (Nancy Montgomery/Stars and Stripes)

Meri Mion got her cake replaced during the ceremony. It was presented by Col. Matthew Gomlak, commander of U.S. Army Garrison Italy, and followed by everyone singing “Happy Birthday” in Italian and English.

"I thought, this is easy, we can make up for what we did 77 years ago," Gomlak said. "I felt a professional obligation. I felt a moral obligation."

Gomlak, who wore a 1944 "pinks and greens" belted jacket for the occasion, gave his speech in Italian. All the speakers Thursday talked about the long friendship of Italians and Americans and the suffering that preceded it through six years of war. 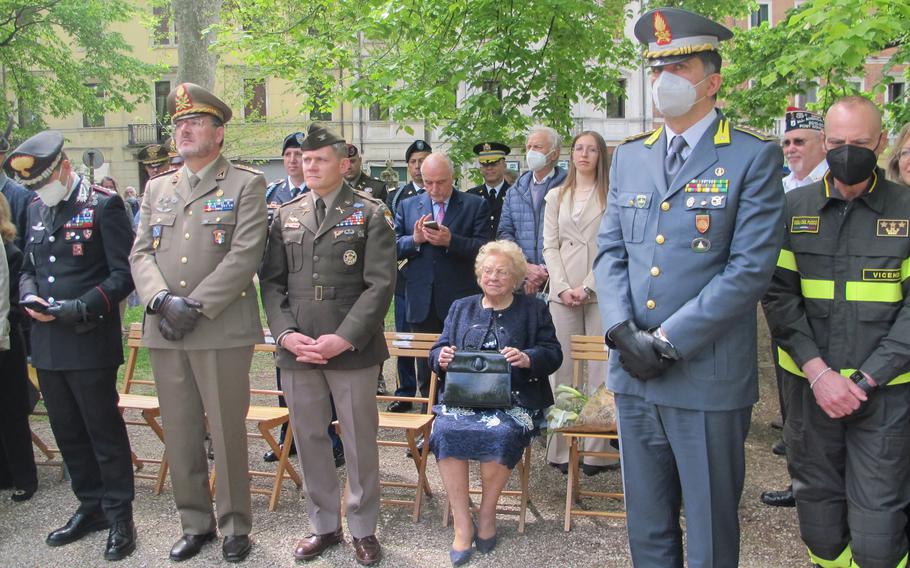 Col. Matthew Gomlak, the commander of U.S. Army Garrison Italy, left of Meri Mion, seated, wore his World War II-era jacket to co-host an event April 28, 2022, remembering the day 77 years ago when U.S. troops battled Germans for two hours to liberate the city. Gomlak also presented a birthday cake to Mion to replace one the American troops had made off with in 1945. (Nancy Montgomery/Stars and Stripes)

Italy switched sides in July 1943, just weeks after Operation Husky, in which the Allies invaded Sicily, took it from the Axis powers and initiated the Italian Campaign. The Allies then fought their way up the country in bitter, smaller-scaled battles.

Hundreds of thousands of soldiers and civilians were killed.

The Battle of Vicenza, just 11 days before the Allies declared victory, involved tankers from the 752nd Tank Battalion and the 88th Infantry Division, according to Ray Holt, an amateur historian whose father served in the 752nd. 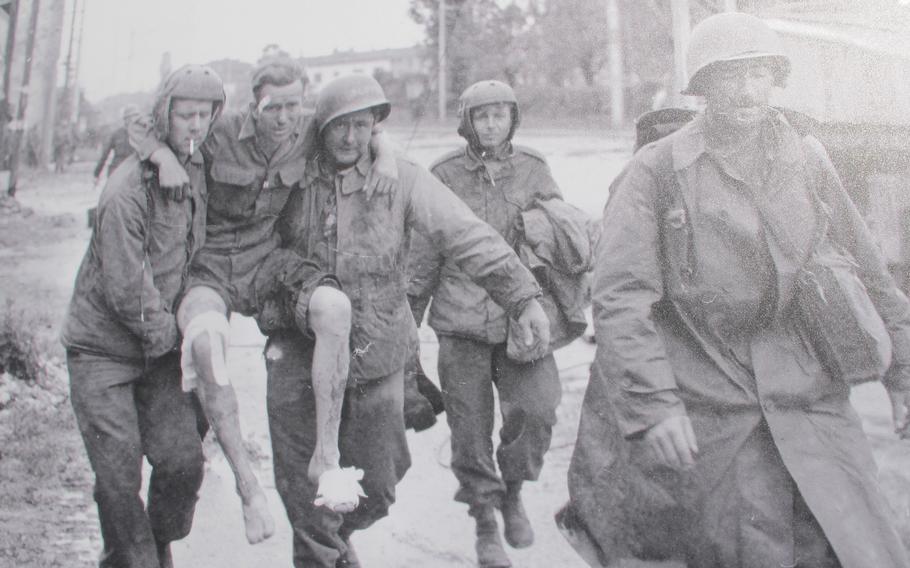 A ceremony Thursday in Vicenza remembering the 77th anniversary of American troops entering the city included photos of that day and the Battle of Vicenza. At least 19 U.S. troops were killed or injured by the German rear guard. (Nancy Montgomery/Stars and Stripes)

"It was probably the worst single day of combat the 752nd experienced," Holt said in an interview.

The troops weren't expecting much resistance because Italian partisans largely controlled the city. But German soldiers remained, along with their tank-killing Panzerfausts, and they positioned themselves in apartments lining the street where some 17 U.S. tanks advanced, in ditches and around corners. Five tanks were hit, Holt said, and his father's gunner was killed.

The battle lasted a couple of hours. It ended with at least 19 U.S. casualties, according to garrison officials. 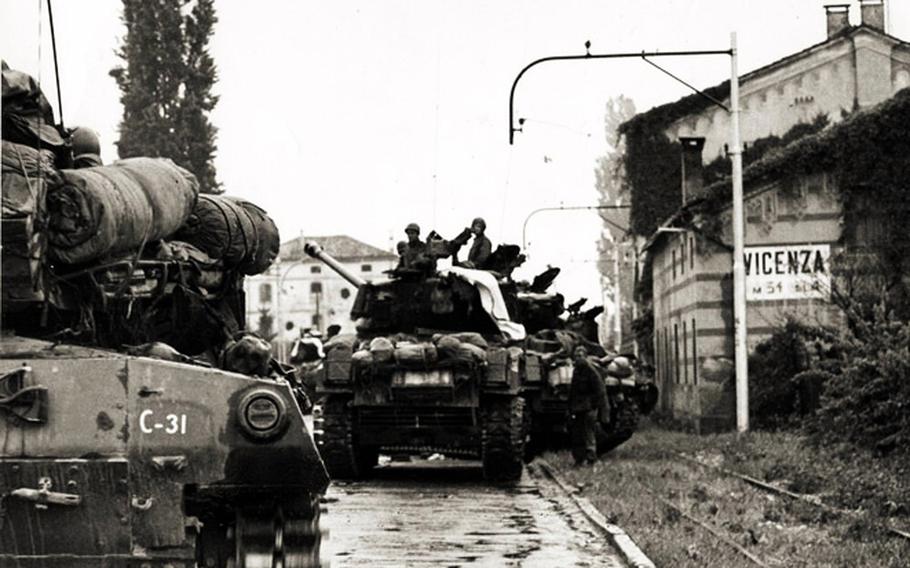 American tanks roll into Vicenza, Italy, after units captured the town from Axis forces April 28, 1945. The Battle of Vicenza, ending just 11 days before the Allies declared victory in Europe, involved soldiers from the 752nd Tank Battalion and the 88th Infantry Division. (U.S. Army)

"My grandfather was also killed that day," said Alessia Zorzan, who covered the ceremony for the local newspaper, Il Giornale di Vicenza. He was 36, she said, and shot by German soldiers who wanted his bicycle.

Mion had spent the night hiding with her mother in the attic as retreating German troops fired nearby. The next morning she saw American troops camped near the house. It was her birthday, and her mother baked a cake, then set it to cool on the windowsill.

Next thing she knew, it was gone, Yogi Bear style.

Did she cry at the loss of her cake?

"No, she was very conscious of other people being hungry," her daughter, Roberta Gaetno, said. "She felt like it was a gift to people in need."