On 50th anniversary of Apollo 16, astronaut Charlie Duke remembers the thrill of it all 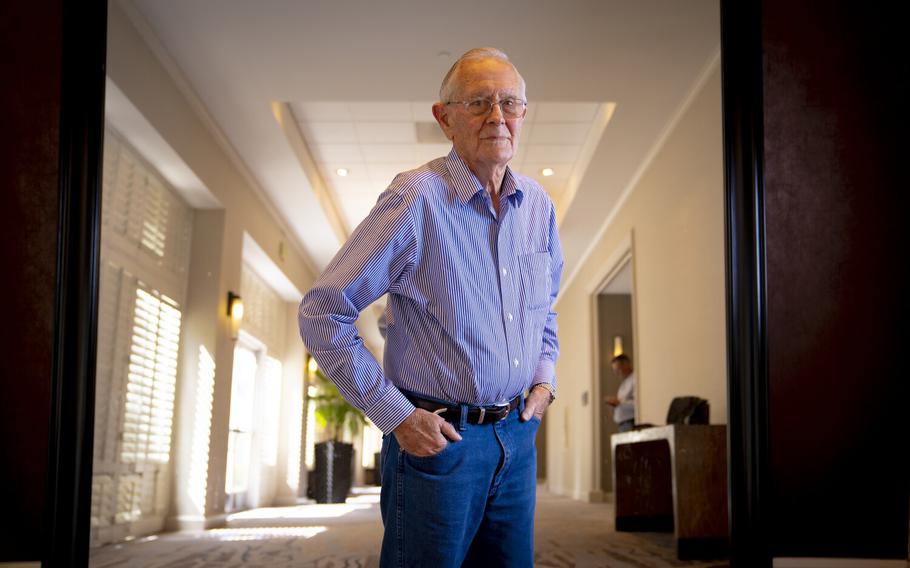 Charlie Duke the day before celebrating at a gala at the San Diego Air and Space Museum to celebrate the 50th anniversary of the Apollo 16, April 22, 2022. Duke was the command module pilot during that historic mission. (Nelvin C. Cepeda, The San Diego Union-Tribune/TNS)

SAN DIEGO (Tribune News Service) — His spacesuit could have sprung a leak, killing him on the spot. And the tiny engine on the lunar lander could have failed, leaving him marooned far from home.

But danger wasn't foremost in Charlie Duke's mind 50 years ago this week when he and fellow Apollo 16 astronauts John Young and Ken Mattingly were in the midst of one of the last and most joyous NASA missions to the moon.

"I was thinking about how comfortable I was up there," said Duke, who was in town for Saturday's anniversary gala that the San Diego Air & Space Museum put together to celebrate the historic 11-day trip into space.

"We belonged on the moon. It is the nature of man to explore, whether it is through a microscope, a telescope or an adventure like we had," he told the Union-Tribune in an interview.

During a program that is little known to younger generations, two dozen American astronauts visited the moon between late 1968 and late 1972. Half of them walked on its heavily cratered surface. Only four in the latter group — Duke, Buzz Aldrin, Dave Scott and Harrison Schmidt — are still alive.

The U.S. is the only nation to have sent crewed spacecraft to the moon, an achievement that Duke, a retired Air Force test pilot and long-time businessman, is trying to keep alive.

He's 86 now. But he still travels widely for speaking engagements, often visiting cities that have a rich history in the space program.

John Glenn, the first American to orbit the Earth, was lifted into space by an Atlas rocket built here. Pieces of the space shuttle and International Space Station also originated in San Diego. And the region has become a feeder program for the astronaut corps. One of NASA's current stars, Jessica Meir, will give the commencement address in June at UC San Diego, her alma mater. She's a member of Project Artemis, which is meant to return humans to the moon.

"He relates his moon experiences in ways that grab an audience with the approachable humanity of the experience," Francis French, a San Diego space historian and author, said of Duke's delivery.

"I've often felt like I was right there on the moon with him as he shares his stories of the three days of exploration he did there."

Duke, a warm, whimsical Texan, is thankful to be part of NASA's history, notably a mission that was considered for cancellation.

Project Apollo began amid great urgency in the early 1960s as the U.S. engaged in a Cold War space race with the Soviet Union. President John F. Kennedy set the seemingly impossible goal of sending men to the moon and back by the end of the decade.

Apollo 11 achieved that goal in 1969. Aldrin and Neil Armstrong touched down on the moon with less than 20 seconds of fuel left in their lander. Michael Collins circled above in the command module.

Armstrong radioed NASA to say they were safe. Duke was on the other end of the line in Houston and replied, "Roger, Tranquility, we copy you on the ground.

"You got a bunch of guys about to turn blue. We're breathing again. Thanks a lot!"

It was an exhilarating moment. But NASA soon cancelled three of nine scheduled follow-on moon landings. Public interest waned after the first landing. The project's rising costs caused alarm. An explosion aboard Apollo 13 nearly killed its crew. And Americans became more focused on issues like Vietnam and civil rights.

For a while, it appeared that the final two flights — Apollo 16 and 17 — also would get chopped.

"That thought crossed my mind," Duke told the Union-Tribune.

"In my opinion the NASA hierarchy cancelled the last three missions because the political climate was changing. They said we've had a successful program and if we have an accident and kill somebody on the moon it's going to have a devastating effect."

Apollo 16 ended up safely launching on April 16, 1972, vaulting into space aboard a 36-story rocket, much of which was built in Orange County. The spacecraft entered the moon's orbit three days later. But Duke and Young's trip to the surface was delayed by six hours when an engine problem was detected on the command module.

The crew had trained for nearly two years, especially for such white-knuckle moments. Along the way, though, Duke, the lunar module pilot, briefly let himself appreciate the moment.

"I wondered what it was going to feel like to land (on the moon)," Duke said. "Is this going to be overwhelming emotionally?"

He got his answer on April 20 when he and Young guided their fragile lander Orion into the Descartes region of the moon, becoming the first explorers to reach the lunar highlands.

Earlier moon landers — particularly Armstrong and Aldrin — are remembered, in part, for the poignant remarks they made upon setting foot on the lunar surface.

Duke, who at 36 was the youngest of the moonwalkers, simply blurted out, "Hog dog! This is great!"

He smiles at the memory.

"By the time it got to our mission nobody really cared about what (I) was going to say," Duke said. "I didn't have anything prepared. ... John wasn't a deep thinker. I wasn't either, at that point."

For many people, the lasting images of Apollo 16 involve charming video footage of Duke and Young wandering across the regolith in an electric-powered lunar rover that had a top speed of 8.6 mph. They traveled 16.6 miles, roughly the distance between downtown San Diego and San Ysidro.

They looked like strangers from a strange planet. Duke remembers how joyous it was, and consequential. Over time, the experience would profoundly change his life.

Many scientists thought that the Descartes region featured rocks that had been shaped by volcanic activity, proving that the moon had evolved over a long period of time. Instead, Young and Duke found rocks that were associated with meteor strikes.

"Our training was all from an evolutionary standpoint," Duke said. "There was never any mention that God had created it all instantly or anything like that. It was just evolution."

He had been raised in a Baptist family but didn't strongly question his scientific training until later, when he was leaving NASA and experiencing troubles in his marriage.

Duke says that he and his wife, Dotty, underwent a religious conversion that led them to the creationist belief that everything in the universe was created by a God.

He chose creationism, a belief he still holds today.

Duke does not believe that NASA would have automatically rejected him if he had expressed that belief while he was seeking a coveted spot as an Apollo astronaut.

That belief "had nothing to do with your ability," he said.