Americans' taxes used to be public — until the rich revolted 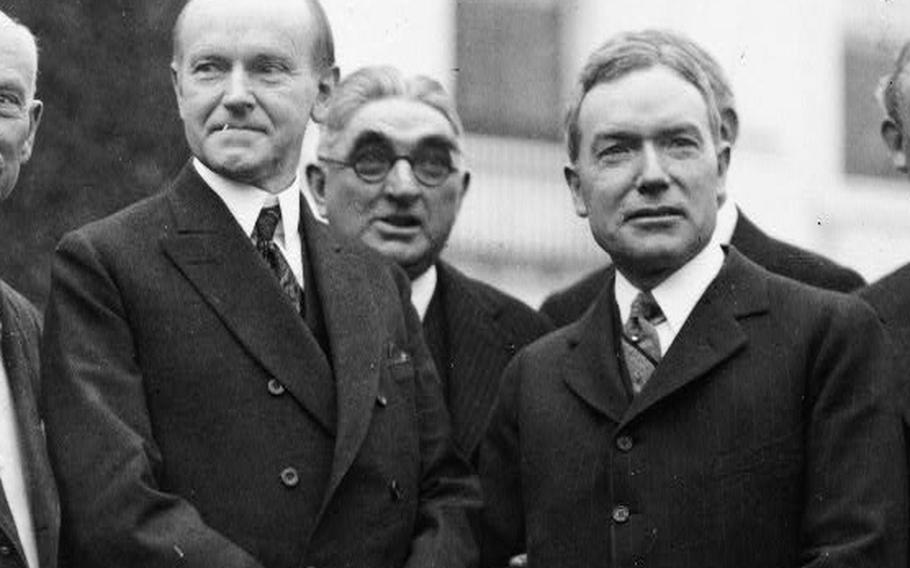 John D. Rockefeller Jr., right, was the country’s biggest taxpayer in 1923, when public disclosure of tax payments was required by law. President Calvin Coolidge, left, pushed Congress to repeal the disclosure law in 1926. This photo was taken in 1925. (Library of Congress)

As Americans send off their tax returns by Monday's deadline, they don't have to worry about their neighbors knowing how much they earned or paid. But for a while in the 1920s, everybody's tax payments were public records for all to see. And the richest Americans were not happy about it.

One goal of the 1924 tax publicity law was to show whether wealthy Americans and large corporations were paying their fair share of taxes. Newspapers published big stories on the first release of tax payments. Oil heir John D. Rockefeller Jr. was America's biggest taxpayer, with a tax bill of $7,435,160.41, equal to about $123 million now. Next was automaker Henry Ford, who paid $2,467,400.10, or $41 million today. Douglas Fairbanks and Gloria Swanson were the highest-paying movie stars. Incomes weren't disclosed, though they could be roughly inferred.

The Big Reveal was short-lived. In 1926, Republican President Calvin Coolidge, under pressure from rich taxpayers, got Congress to end the public tax payments.

President Joe Biden, in his fiscal 2023 budget, is proposing a "Billionaire Minimum Income Tax" of 20% on households with more than $100 million in both income and "unrealized gains." The proposal wouldn't make tax payments public but seeks to adjust a "tax code that results in America's wealthiest households paying a lower tax rate than working families," the White House said. Critics contend the plan would hurt long-term investments.

Tax payments were secret after the modern federal income tax was established in 1913. But in the early 1920s, reformers began calling for disclosure, as former Republican president Benjamin Harrison had urged in an 1898 speech on the "Obligation of Wealth."

"Each citizen has a personal interest in the tax return of his neighbor," Harrison said. "We are members of a great partnership, and it is the right of each to know what every other member is contributing to the partnership, and what he is taking from it."

In 1924, Coolidge and Treasury Secretary Andrew Mellon, of the ultrawealthy Pittsburgh banking family, got the Republican Congress to cut the top individual tax rate from 58% to 46%. In return, progressive senators, including some Republicans, won a provision to make all federal tax payments public, arguing that this would deter tax dodgers.

That fall, the Internal Revenue Service's first release of tax payments for 1923 made headlines across the country. Mellon, who had vigorously opposed public release, was reported to have paid $1,178,988 in taxes, equal to $19 million today. Railroad magnate Frederick Vanderbilt paid $800,000 in taxes, equal to $13 million now. Papers also published long lists of payments by local, ordinary taxpayers.

The annual disclosures revealed that, as now, the ultrarich often paid relatively low tax rates after taking legal write-offs. In 1924, Chicago chewing-gum king William Wrigley Jr.'s taxes plummeted to $2,681, or about $44,000 today, from $865,815 in 1923, or $14 million now. Wrigley's representatives said he had "written off certain losses of the last 10 years," the Chicago Tribune reported.

Humorist Will Rogers wrote that for taxpayers, "this publication of amounts" was "a test of their honesty." He concluded that "the income tax has made more liars out of the American people than golf has." To prevent the rich from benefiting from tax loopholes, Rogers suggested, "you should get out a new kind of tax every year or two, so they don't know how to beat it."

Not all newspapers joined in the tax dump. The Boston Herald called the exposure "an outrage" that violated taxpayers' privacy. The Minnesota Tribune, in an article headlined "No Aid For Snoopers," vowed to protect the privacy of the ordinary taxpayer: "He ought to be allowed to hug his own little income to his bosom, in glee or sorrow, without the public sniffing around him."

Many papers feared publishing the lists would be illegal. That issue was cleared up in May 1925, when the Supreme Court unanimously ruled that newspapers couldn't be sued for printing the tax lists.

That fall, The Washington Post plunged in, under the headline "Spotlight glares on tax payments for 1924 incomes." Tops in Washington was the paper's own publisher, E.B. McLean, who paid $281,125 in taxes, or $4.6 million now. Coolidge paid $14,091, or $219,000 now. "In several instances men reputed to be wealthy made small returns," the paper reported. 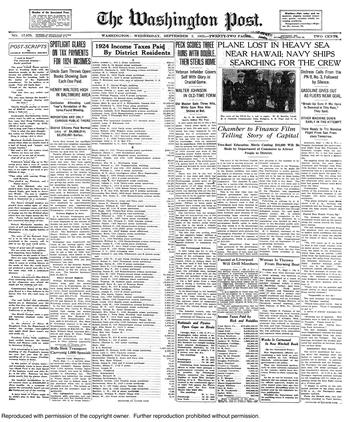 The Post noted that a "striking increase was shown in the number of women making individual returns, evidence of their growth in the business and professional world." Leading the way in Washington was Kate Willard Boyd, from the Willard Hotel family, whose tax payment totaled $31,842, or $528,000 now. The Post also listed in alphabetical order the payments of many city residents, starting with Aussell L. Alden of 809 L St. NW, who paid $58.41 in taxes, equal to $960 today.

The Chicago Tribune's state-by-state stories on the top corporate taxpayers read like a roll call of consumer products such as washing machines and automobiles: "Maytag Highest Iowa Taxpayer," Studebaker "noted in Indiana List," and "Nash Tax Is Largest in Wisconsin."

The Tribune noted that one group of local citizens was missing from taxpayers lists: "The search for incomes of the city's underworld gentry, the beer runners, the bootleggers, crooked politicians, gunmen, gang leaders and their like indicated that, unless they have cheated Uncle Sam, they have no incomes."

The Pittsburgh Courier, a Black newspaper, lamented the lack of African Americans among the high taxpayers. "The most astounding fact" about New York's listing of Black "Harlem millionaires is that there aren't any," the paper said. Later, the Courier reported there was one Black millionaire, Watt Terry, who owned properties in Harlem but lived in Brockton, Mass.

Treasury chief Mellon led the opposition by the wealthy to the disclosures. "There is no excuse for the present publicity provision except the gratification of idle curiosity and the filling of newspaper space," he argued. Many lower-earning taxpayers also protested the public exposure of their payments.

In 1926, at Coolidge's urging, Congress cut the top tax rate again, this time to 25%, and repealed the tax disclosures. Sen. George Norris, R-Neb., a leading proponent of disclosure, predicted the repeal would make it easier "through secret manipulation for big taxpayers to avoid payment of the honest taxes which they owe under the law."