Minutes after an attack left at least 52 people dead at a train station in Kramatorsk, Ukraine, on Friday, Washington Post reporters saw near the scene the remains of a missile, with the words "for the children" scrawled on its side, in Russian.

The apparent revenge message appeared to refer to the Kremlin's claims about the security of Russian speakers in Ukraine's eastern Donbas region after years of conflict. Russia has cited defense of the Donbas, and of Russia, as a reason for the invasion.

The words sent a chilling message. But they are not the first to be written on bombs or missiles used in war.

Here is some of the history.

- Attacks targeting the Islamic State: In December 2014, 27-year-old Jordanian pilot Moath al-Kasasbeh crashed during a mission in Syria, and his whereabouts were unknown for weeks. On Feb. 3, 2015, the Islamic State released a video that showed him being burned alive inside a cage.

Jordan launched airstrikes in response. Members of the Jordanian military wrote messages on some of the bombs and missiles.

"The host will be defeated and they will turn their backs and flee. From a brave Jordanian woman to you, Baghdadi," one soldier wrote to ISIS leader Abu Bakr al-Baghdadi on the side of a bomb, according to the Wall Street Journal. 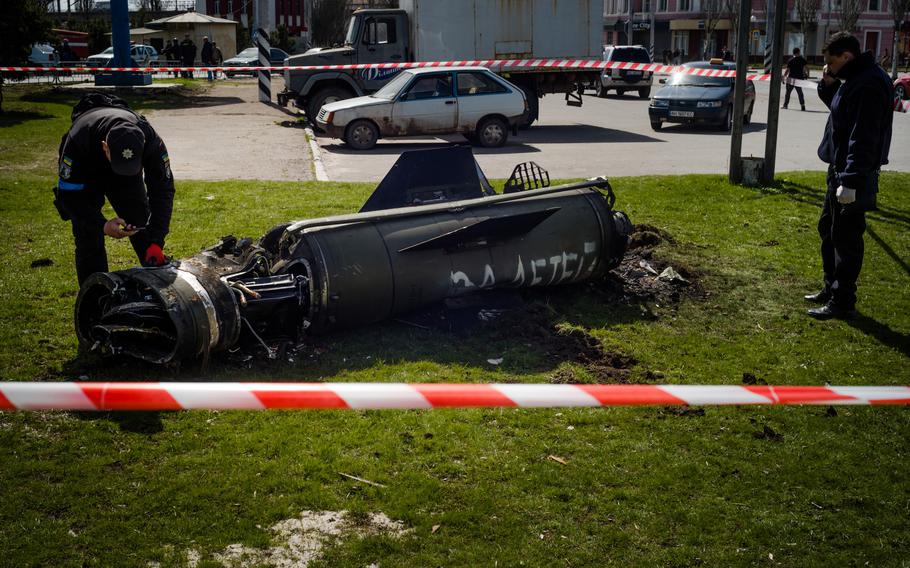 Part of a missile with the Russian words “for the children” painted on it is seen after a strike on the Kramatorsk railway station in eastern Ukraine on April 8, 2022. (Wojciech Grzedzinski for The Washington Post by Wojciech Grzedzinski)

British service members also wrote on bombs during campaigns against ISIS in Iraq and Syria.

A photo of a bomb with the words "Love from Manchester" scribbled on it began to circulate on social media on May 25, 2017. Although the veracity of the photo was in doubt at first, Britain's Royal Air Force confirmed the image was real.

The missile was said to be mounted on a plane at Royal Air Force base in Cyprus for an airstrike against an ISIS target.

Three days earlier, a suicide bomber had detonated an explosive device at an Ariana Grande concert in the Manchester Arena, killing 22 people and injuring at least 59, many of them teenagers. ISIS later claimed responsibility for the attack.

- Allied forces in World War II: Two soldiers, identified as Technical Sergeant William E. Thomas and Pfc. Joseph Jackson, were photographed with artillery shells with the words "Easter eggs for Hitler" and "Happy Easter Adolph" written on them, on March 10,1945 - one day before Easter - according to the U.S. National Archives.

Exactly where the Department of Defense photo was taken remains unclear. Black artillery units, and Black soldiers in other units, served in the Allied fight to retake France and topple Hitler's Third Reich in Germany. The United States did not racially integrate its military until after World War II.

In a photo taken by a Royal Navy photographer, a man identified as Bob Cotcher, of Chelsea, could be seen having written "Tirpitz it's yours" on a 1,600-pound bomb in chalk before an attack in Alten Fjord, Norway, on April 3, 1944.

Tirpitz was an infamous, 52,000-ton German battleship, the sister ship of the Bismarck. Dubbed "The Beast" by British Prime Minister Winston Churchill, at the time it was the heaviest ship ever built by a European navy.

The Tirpitz was sunk on Nov. 12 of that year as the result of a British air raid as part of Operation Catechism in the Norwegian city of Troms. More than a thousand German sailors lost their lives.

The Washington Post's Mary Ilyushina contributed to this report.