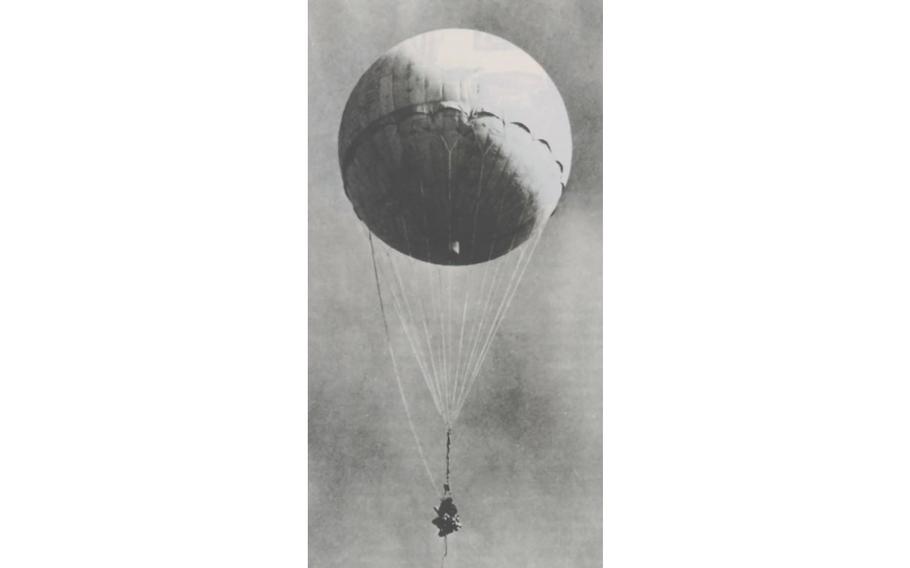 A balloon bomb, reinflated after being shot down. (U.S. Army)

(Tribune News Service) — Right around New Year’s Day, 1945, the Japanese army released an unmanned balloon from the east coast of the main island of Honshu.

It was made of 600 pieces of paper glued together, in all likelihood, by schoolgirls. It measured 33 feet in diameter and when fully inflated held about 19,000 cubic feet of hydrogen. It carried several incendiary bombs.

The balloon rose into the currents of the jet stream and began its long path eastward. It was equipped with an ingenious equilibrium system that spit out hydrogen when it climbed too high and dropped sandbags when it dipped too low. The teardrop-shaped specter crossed 6,200 miles of the Pacific Ocean in two or three days, and finally fell apart on Jan. 4, 1945, landing in an orchard off Vine Hill Road, just east of Forestville.

“It was 5 or 6, and Dad and I were going out to bring in the goat for the evening,” said Terence Alberigi, who was 14 at the time and still lives in the area. “We heard a whistling sound, and we saw this thing fall from the sky. It hit an apple tree and broke a branch.”

Alberigi, now 91, estimates the contraption landed 150-200 feet from him and his father, Frank. “It fell behind a workman’s cabin,” Terence said. “We weren’t that far from it.”

Frank Alberigi’s reaction? “What the hell is it?” his son recalled.

The Alberigis didn’t know it, but the strange occurrence was part of a coordinated campaign by the Japanese military to bomb the U.S. mainland in a slow-motion, unguided onslaught. Between November 1944 and early April 1945, it is believed, the Axis power launched roughly 9,300 weaponized balloons.

Most probably fell into the ocean, but the U.S. government logged 285 incidents on its soil — balloons spotted, fragments found or explosions plausibly related. One killed six people in Oregon, the only enemy-inflicted casualties on the U.S. mainland in World War II.

The incident at the Alberigi farm, an attack by a foreign power on a private residence in Sonoma County, should have been banner news for The Press Democrat. Especially because, as the newspaper would later write, hundreds of people saw the balloon sweeping inland from the Jenner area, “highlighted by the rays of the setting sun.”

But The Press Democrat didn’t reveal the story for more than eight months. Just hours before the balloon hit the Alberigis’ apple tree, the U.S. Office of Censorship issued a nationwide gag order on the press, seeking to tamp down the terror the Japanese were hoping to instill.

The success of the censorship order is nearly as unbelievable as the operation that inspired it.

A number of countries tried to use hot-air balloons in battle before World War II. The Japanese were the first to mount a sustained campaign. They called it Operation Fu-Go.

The first balloon bomb was set free on Nov. 3, 1944. The last few set sail around this time of year, 77 years ago. Fu-Go ended after that as American B-29 raids disrupted Japanese hydrogen production.

Axis military leaders knew the balloons were too unpredictable to inflict major damage. The goal was trigger dread in U.S. citizens — just as American planes had terrified the Japanese when they bombed Tokyo in the Doolittle Raid on April 18, 1942. A secondary goal, which surely resonates today, was to ignite forest fires in the Pacific Northwest.

The footprint of the bombardment was vast. Army Air Corps planes shot down balloons in the Aleutian archipelago, part of Alaska. Fragments were found as far east as Michigan, and as far south as Mexico.

The Japanese were more successful than they knew. One bomb caused a momentary loss of electrical power at the atomic energy plant in Hanford, Washington — a facility that would ultimately produce materials for the bombs dropped on Hiroshima and Nagasaki.

And on May 5, 1945, Rev. Archie Mitchell and his wife, Elsie, took five 11- to 14-year-olds from their Sunday school class for a picnic and fishing excursion on nearby Gearhart Mountain in Oregon. Elsie Mitchell was pregnant with their first child. As the reverend was moving the car, the rest of the group found a strange object on the forest floor. It was a Japanese bomb. It exploded, killing Elsie and all the children.

Almost none of it made the newspapers or radio bulletins at the time.

When the balloon fell on their property, Frank Alberigi called the Sonoma County Sheriff.

“The next day, three or four Army trucks full of soldiers came out, and they were looking all over the place for bits and pieces,” said Terence, a retired librarian who worked at City College of San Francisco for 26 years. “They were probably there all day. We had two dogs, and they loved it. They got more attention.”

The Army guys were ballistics experts from Hamilton Field near Novato, according to a story that ran in The Press Democrat on Aug. 16, 1945, the day after the censorship order was lifted. The FBI was there, too. Authorities stored the device for two days in the lobby of the sheriff’s office in Santa Rosa, and at one point invited Press Democrat editors and reporters to examine it.

Terence Alberigi said he might have told a neighbor about the balloon, but mostly kept it quiet.

That incident is one of 285 listed in a G-2 Periodic Report — a series of World War II operational documents — from Aug. 4, 1945, and later published in an account by Robert C. Mikesh in a 1973 edition of Smithsonian Annals of Flight. (As many as 1,000 balloons may have reached North America, with many going unnoticed in remote terrain.) Assigned as “ Sebastopol, California,” it was the 11th documented incident; just the sixth to strike the U.S. mainland; and the first in this state.

That’s pretty close to Alberigi’s recollection: “A tangle of ropes, and some wood.”

In his 2014 book “Fu-Go: The Curious History of Japan’s Balloon Bomb Attack on America,” author Ross Coen devotes an entire chapter to the Vine Hill fragments, writing that, “From a military intelligence perspective” it was one of the most significant incidents becasue the undercarriage of the balloon offered more intact equipment than any recovered to that point.

“The carriage included a wooden box with a clear plastic top,” Coen wrote. “Inside was a sealed wet battery and about a quart of slushy liquid with a peculiar chemical odor. Attached to the outside of the wooden box was a small metal container with what looked like a detonator. The fuse leading to this device had worn through a few inches from its connection point, perhaps explaining why the detonator failed to function.”

The slushy liquid was later determined to be an antifreeze solution, necessary to keep the battery running in the subzero temperatures of the upper atmosphere.

The most significant discovery from Vine Hill: four damaged incendiary bombs, still attached to the aluminum wheel that suspended the sandbags. As The Press Democrat wrote in August 1945, “None who examined the infernal machine realized at the time that an avid bomb in the mechanism could have exploded at any time, causing death and destruction.”

The day after Vine Hill, balloon scraps turned up in Napa; analysts deduced they were part of the same vessel. The G-2 report also noted balloon paper fragments found in West Cloverdale on March 12, 1945, and Guerneville on March 18.

The Press Democrat’s August 1945 story mentioned additional examples. Remnants of a balloon were found near the Mount Jackson mine on March 23. (There was debate over whether this, too, was part of the Vine Hill balloon.) Scraps were uncovered near Geyserville on May 15. And a bomb started a fire near Cotati in June, though The Press Democrat wasn’t sure if it had arrived via a Japanese balloon.

The most dramatic event came on Feb. 23, 1945, when a balloon was spotted over the Mayacamas range. The military dispatched a Lockheed P-38 Lightning from Santa Rosa Army Air Field — now the site of the Charles M. Schulz-Sonoma County Airport — and shot it out of the sky near Calistoga.

That was the first of only two known instances of a U.S. plane bringing down a Japanese balloon. The other happened about a month later, near Reno, Nev.

The last incidents related to Fu-Go in the G-2 report occurred July 20, 1945 — an undetonated bomb in Oregon, and a balloon envelope in Nevada. But nearly a decade after that, the Department of Defense confirmed that a Japanese bomb “still highly explosive and dangerous even after exposure” had been found in Alaska.

As Mikesh wrote for the Smithsonian Institution in 1973, “It would be safe to assume that ... hundreds of balloons and their bombs have yet to be discovered.”