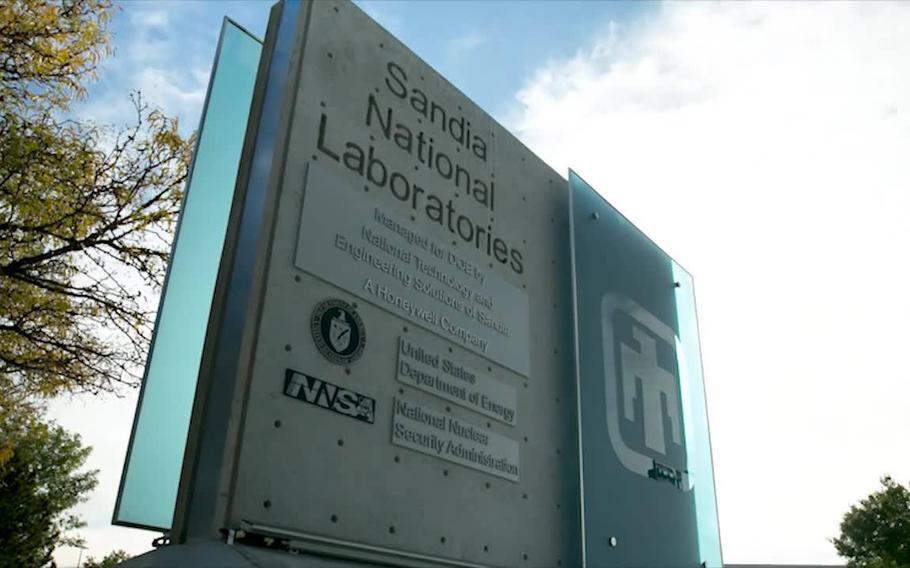 (Tribune News Service) — The U.S. military has had a base on the southern fringes of Albuquerque since before World War II, but the land has been an integral part of people’s lives in what is now central New Mexico for thousands of years.

Evidence has been found of possible fire pits from the archaic period — the earliest phases of a culture thousands of years ago. Artifacts found on base suggest prehistoric people were using the area to hunt and gather around A.D. 1200. There were dwellings built at some point and, eventually, homesteaders, who staked claims to the land.

All of this was likely because of the arroyos that cut across the base from east to west and a bountiful natural spring, said Christina Chavez, Sandia National Laboratories’ first full-time archaeologist.

“Water is a source of humanity,” she said. “No matter what, and no matter where, you’re always going to find occupation near a large water source.”

Chavez is tasked with scouring the lands to document and preserve historic artifacts so that the U.S. Department of Energy stays in compliance with the National Historic Preservation Act, which requires federal agencies to consider the effects on historic properties when carrying out or funding projects.

“Stewardship of the land that we work on is important to Sandia,” said Stephanie Salinas, Sandia’s senior manager of environmental stewardship. “This makes it critical to have an archaeologist on staff who ensures understanding about cultural resources on site.”

What is now Sandia National Laboratories was originally called Los Alamos National Laboratory’s “Z-Division” during the top secret Manhattan Project. The division started its transition to an existing military base in Albuquerque in the fall of 1945. Sandia, since its inception, has played a role in the design and development of the country’s nuclear weapons.

But there’s more to the labs than scientists and engineers. Chavez’s work includes discovering and documenting painted pottery, stone tools and arrowheads from thousands of years ago to unique glass made during the Great Depression.

“What I enjoy most is the prehistoric aspect of it,” she said. “Being able to be in one location, there is kind of the convergence of this occupation (of the land) for thousands of years, which is fascinating to me. And it’s still going on.”

Chavez, who has bachelor’s and master’s degrees from New Mexico State University, was hired in 2018. The labs previously would contract out archaeologists when building a project. She made her way from other military installations, having worked as an archaeologist at Fort Bliss in El Paso and White Sands Missile Range in southern New Mexico.

One of her first big surveys on base was done at the 300-acre Sandia Robotics Vehicle Range, a high-desert mix of hills, dirt tracks, rocky areas, water hazards and urban obstacles used to test robots.

She documented the pottery, glass and other artifacts in databases, and then worked with Robotics Manager Jake Deuel so his team would understand some of the history of the land and avoid sensitive areas during field work.

The process can be frustrating for the labs’ scientists, Sandia officials acknowledged. But the robotics specialists were more understanding after taking a short field trip with Chavez to the site to get an explanation of some of the history.

“Christina and I came back and started talking,” Deuel said in a statement. “I hadn’t fully appreciated the significance of what was on this site before us.”

Chavez doesn’t remove any artifacts. The goal is to do measurements, take photographs, take notes on the items and then document them.

“Take an arrowhead, for instance. If people take those away from where they found it, take it back to their office and say, ‘Hey, I found this.’ And they give it to me. The context in which it came from is no longer existing,” Chavez said.

She sometimes gives tours with Sandia employees who are interested in the base’s history.

“One of my big educational tools is to leave things,” she said. “Because then I can take groups out and I can take people out who are interested and educate more people.”

At Sandia, artifacts have been uncovered from four major cultural temporal periods, she said. There are artifacts from hunter-gatherers and dwellings that haven’t been excavated.

“They’re not Chaco Canyon or anything like that, they’re still buried below the soil,” she said of the dwellings. “But you have this time frame of early hunter-gatherers and then becoming more sedentary and living in more established occupational areas where farming started to happen.”