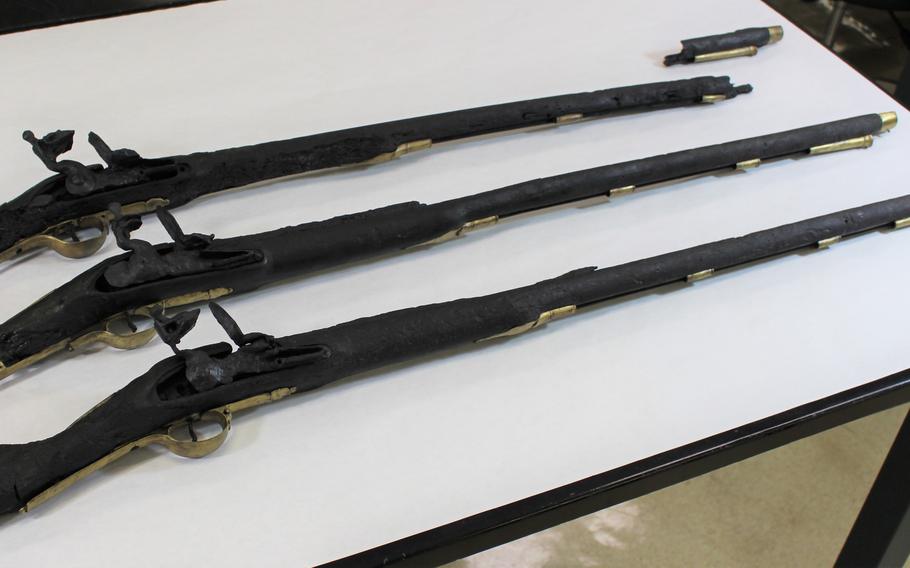 Two centuries of marine grime have been peeled away from three Revolutionary War muskets found off Florida, revealing the firearms are largely intact. (Florida Division of Historical Resources Facebook)

Two centuries of marine grime have been peeled away from three Revolutionary War muskets found off Florida, revealing the firearms are largely intact.

The revelation was made this week when the Florida Division of Historical Resources shared before and after photos of the British Brown Bess muskets.

All three muskets are missing their wooden butt and stock, but retain many of their other parts, the photos show.

“Conservators removed the outer layer of corrosion to reveal the muskets, complete with intact stock, lock, and brass furniture,” the division reported in a March 23 Facebook post.

The muskets were found on the wreck of a British Loyalist ship that sank off St. Augustine in December 1782, during a frenzied British effort to evacuate troops, Loyalists and enslaved Africans from Charleston, South Carolina, historians say. St. Augustine is on Florida’s northeast coast, south of Jacksonville.

“The evacuation of Charleston was a massive logistical effort by colonial authorities, involving more than 129 ships gathered from throughout the British Empire,” according to data cited by the St. Augustine Lighthouse & Maritime Museum.

“One of the ships carrying Loyalists and their possessions, along with some military hardware, ended up wrecking on the notorious St. Augustine Bar, and is now known as the Storm Wreck.”

The Storm Wreck, which sits about a mile off St. Augustine, was found in 2009 by the museum’s Lighthouse Archaeological Maritime Program (LAMP) and later added to the National Register of Historic Places.

Divers with LAMP were “groping around in the dark” on the ocean floor when they found the muskets in 2012, and photos show the weapons were largely unrecognizable, including one that had a bottle neck fused to it.

A uniform button has also been found on the wreck — with the number 71 on it — which historians believe indicates the 71st Regiment may have been on the ship when it went down. The regiment is known to be among those evacuated from Charleston, the museum says.

The three muskets will eventually be on public display at the St. Augustine Lighthouse & Maritime Museum, the state said.