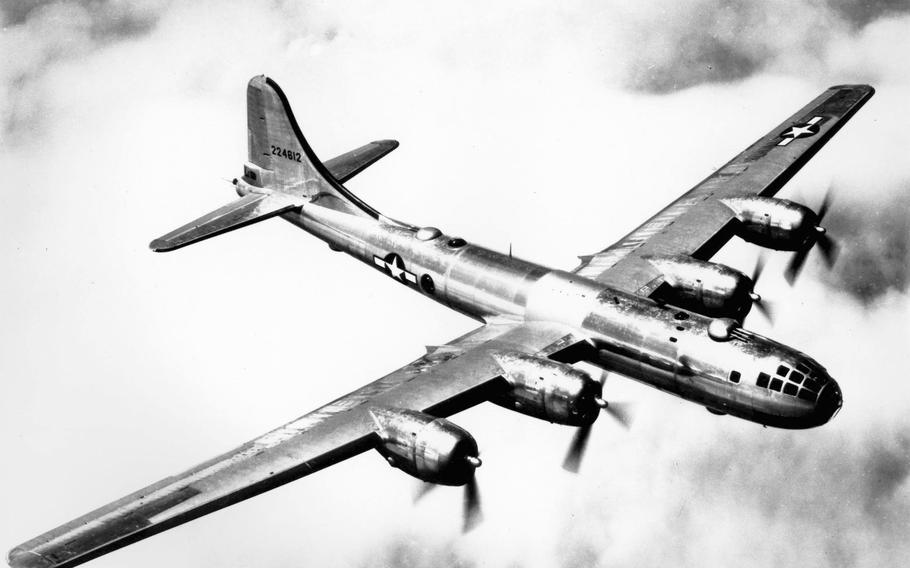 A B-29 Superfortress heavy bomber. One of the world’s largest concentrations of sunken warplanes is hiding somewhere off the Northern Mariana Islands in the Western Pacific, and a NOAA-backed team sets out this week to find it. (U.S. Air Force)

(Tribune News Service) — One of the world’s largest concentrations of sunken warplanes is hiding somewhere off the Northern Mariana Islands in the Western Pacific, and a NOAA-backed team sets out this week to find it.

The graveyard’s occupants include the remains of “many” B-29 bombers and 76 U.S. service members who died as part of a plan to bring World War II to the doorstep of Japan. This included flying thousands of miles to bomb military factories in Tokyo.

Among the best known of the lost planes is “Joltin’ Josie the Pacific Pioneer,” the first B-29 “superfortress” in the Pacific Theater to threaten Japan — and one that went down with its entire crew, historians say.

Finding “Joltin’ Josie” is a priority for the team, which will scour the seafloor off Tinian and Saipan Feb. 24 through March 11, according to a release from NOAA Ocean Exploration.

“Tinian and Saipan served as major air bases during the final year of World War II, with B-29 bombers flying long-range missions to Japan,” NOAA Ocean Exploration reported in an expedition overview.

“Many aircraft were lost on takeoff and landing. The lost aircraft have great significance to American history, yet the final resting places of these B-29s remain largely unknown.”

The team will map the seafloor, create an inventory of crash sites and provide experts with the data needed for “site management and preservation.”

“Finally, the expedition team hopes to document and honor the final resting place of 76 U.S. service members who lost their lives in these waters,” NOAA Ocean Exploration says.

The team will use a remotely operated device that will reach depths of nearly 2,000 feet during the expedition.

NOAA says it knows the location of just one B-29 off Saipan, and that plane was found by accident when a team investigated “sonar anomalies” in 2016. It found the bomber upside down but still “in fairly good shape,” including wings with still-retracted landing gear.

That discovery had to be quickly abandoned due to bad weather, so the upcoming mission will offer a first chance to survey the wreckage, NOAA says.

If the team does find “Joltin’ Josie,” it’s possible there may not be much left.

“Crash reports were pretty clear about how most of the planes that ditched or crashed off Tinian broke apart or even exploded,” NOAA reported in 2016. “Additionally, wreckage that has been on the bottom for 70 years does not necessarily look like pieces of an airplane on a sonar image.”

“Joltin’ Josie” was loaded with bombs and headed to Japan on the evening of April 1, 1945, when it mysteriously burst into flames “shortly after takeoff.”

She was taking part in “Mission 51,” a grand scale offensive in which 121 B-29s were sent “to attack the Nakajima aircraft plant” in Tokyo, the Aviation Safety Network reports.

The cause of the explosion isn’t included in historical data, but “engine fires were not uncommon in B-29s,” NOAA reports.

All 12 passengers on “Joltin’ Josie” were lost when it fell burning into the sea, according to the Aviation Safety Network. The 12 included 11 service members and one passenger, The Digital Archaeological Record says.

The network lists the 11 service members as: