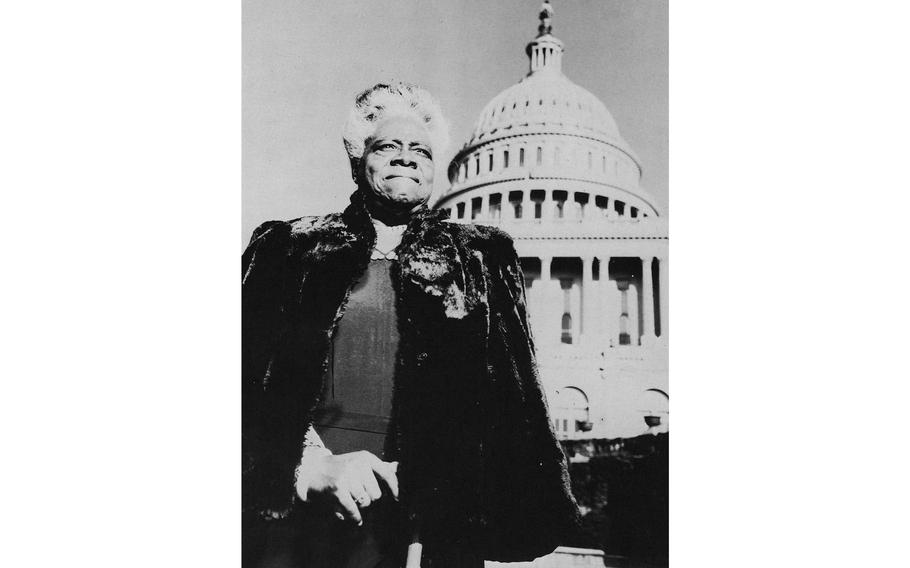 Portrait of American educator and activist Mary McLeod Bethune (1875-1955) with the United States Capitol Building in the background, circa 1950. (Hulton Archive, Getty Images/TNS)

WASHINGTON — In a building where change can come slowly, the statues are no exception. But at least two new marble and bronze faces will arrive at the Capitol this year — one a Black woman replacing a Confederate general, and the other a big planner bringing a small victory for advocates of D.C. statehood.

It’s been a long journey for Mary McLeod Bethune, the civil rights activist who died in 1955. She will become the first Black woman to join the National Statuary Hall Collection, a group of 100 statues of important people, with two donated by each of the 50 states.

Her more than 6,000-pound likeness will take its place in the Capitol sometime in the coming year as a gift from Florida, after state leaders decided she was a better example of an “illustrious” citizen than Confederate Gen. Edmund Kirby Smith. His statue stood for nearly a century.

But the exact timeline for unveiling Bethune remains unclear, even though the sculpture itself is complete and has jumped through most of the hoops in a complex approval process. Getting a statue into the collection isn’t as simple as just commissioning one and then dropping it off at the Capitol, as other states have found. Florida began its Bethune push six years ago.

Another newcomer has a firmer timeline. Pierre Charles L’Enfant, the man who planned Washington, will find a home under the gleaming dome of the very building he once envisioned would be the house of Congress. Donated by the District of Columbia, the statue will be unveiled on Monday, Feb. 28, a date meant to fly in the face of when “D.C. residents were first denied congressional voting representation and self-government,” according to Del. Eleanor Holmes Norton.

(That law was enacted on Feb. 27, 1801, but the anniversary inconveniently falls on a Sunday this year.)

While L’Enfant will not officially become part of the iconic National Statuary Hall Collection, which remains capped at 100 statues, he will stand in the congressional complex as the second offering from D.C., which puts it on roughly equal footing in Norton’s eyes.

“We have made historic progress on D.C. statehood this Congress, and the unveiling of D.C.’s second statue in the Capitol is the latest recognition by the House that D.C. deserves to be a state,” she said in a statement celebrating the announcement.

Congress agreed to accept the bronze of the French-born engineer back in 2020, just before the pandemic began. The belated unveiling ceremony will be relatively small, thanks to coronavirus and security restrictions at the Capitol, which remains closed to most public tours.

L’Enfant, the primary author of the capital city’s blueprint, had been waiting at a local government building, One Judiciary Square. Now he will ascend the Washington hill he once declared a “pedestal awaiting a monument” to join Frederick Douglass, the first statue gifted by D.C. a decade ago.

A black rose and a walking stick

The statues throughout the Capitol remain mostly white and male, and 10 Confederate figures remain in the National Statuary Hall Collection. Those include Mississippi’s 1931 addition of Jefferson Davis and Georgia’s 1927 pick of Alexander Hamilton Stephens, the failed president and vice president of the Confederate States of America.

When the Bethune sculpture arrives, it won’t need to topple its predecessor. Smith, the general from Florida, was already carted off to a museum in September.

“The first African American ever to represent a state in the National Statuary Hall Collection is overdue, and I am grateful to everyone who has made this historic sculpture — one for all Americans — possible,” said Florida Democratic Rep. Kathy Castor in a statement.

Bethune was chosen by the Florida legislature in 2018 after protests for racial justice spread across the country. The marble came from the last piece taken from an Italian Alps cave where Michelangelo once sourced his materials, according to a website dedicated to the project. Fort Lauderdale sculptor Nilda Comas will be the first Hispanic woman to have work displayed in the collection, Castor said.

Standing at 11 feet high, a gently smiling Bethune wears a cap and gown and stands in front of a stack of books, signifying her dedication to education. She carries a black rose in one hand and a staff in the other, honoring her students (she called them “black roses”) and her habit of collecting walking sticks, including one from President Franklin D. Roosevelt.

Bethune was born in South Carolina in 1875 to parents who were once enslaved. She established a Daytona Beach school that evolved into Bethune-Cookman College by 1931. It was one of only a few schools below the Mason-Dixon line at that time where Black students could pursue an education beyond high school.

The statue has already been seen by the public, during a mini-tour of Florida at the end of last year.

A process with fits and starts

Replacing a statue in this exclusive group at the Capitol would have been unthinkable just a couple of decades ago.

When Congress authorized the National Statuary Hall Collection in 1864, it allowed each state to choose two of its citizens “illustrious for their historic renown or for distinguished civic or military services.” But it didn’t give states an avenue to change their minds. That came in 2000, with a revision that allowed them to ask the Joint Committee on the Library of Congress to approve a new pick, after first getting it through the state legislature.

Virginia is among the states that have exercised that option in recent years, pulling its statue of Robert E. Lee in 2020. The replacement will be civil rights leader Barbara Johns.

Picking a name is just the beginning, said Julie V. Langan, director of Virginia’s Department of Historic Resources. “There are many steps in the process, and when we embarked on this adventure, I was forewarned by the staff at the U.S. Capitol that this is a multi-year undertaking,” she said.

Virginia has already set a budget of $500,000 and requested proposals from sculptors to create the Johns statue, which will depict her at age 16. That’s when she led her Farmville classmates in a 1951 protest of unequal education at R.R. Moton High School, before securing NAACP support to file a lawsuit, Davis v. Prince Edward County.

A sculptor will likely be selected by late February or early March, said Langan, who predicted it could be completed in 2023.

“A lot of design decisions will be made pretty quickly, and then there’s going to be a long pause,” she said. “It would seem that nothing is happening, but that’s when the artist is going through the creative process.”

From there, officials at the Capitol must approve a long list of items, from the inscription on the pedestal to the details of an unveiling ceremony.

Other states are at various stages of the same process, aiming to remove old statues in favor of new ones. Taken together, those efforts will eventually reshape the collection.

The state got the OK from the Architect of the Capitol on the design for the Bates statue in recent months but was asked to revise the Cash statue’s guitar to make sure curious visitors can’t reach it, according to the Arkansas Democrat-Gazette.

Utah’s statue of political trailblazer Martha Hughes Cannon has been placed on display in Utah’s State Capitol as it awaits a date to replace inventor Philo T. Farnsworth’s statue.

Nebraska unveiled its new statue of the legendary Chief Standing Bear in Statuary Hall in 2019, and work is wrapping up to complete its second replacement, author Willa Cather.

A couple of states have taken more circuitous paths to update their statues. Missouri’s Harry Truman statue was initially conceived of in 2002, and a renewed push revived optimism that a version of the president could make it back to Washington by 2022. Kansas first voted to send aviator Amelia Earhart in 1999, but her likeness has yet to appear at the Capitol.

Meanwhile, some in Congress want to see larger moves to kick Confederates off their pedestals, not just in the state-donated collection, but elsewhere in the Capitol too.

Last summer, the House voted for the second year in a row to remove busts and depictions of white supremacists and Confederates from the complex, including former Chief Justice Roger B. Taney, who authored the Dred Scott decision that held Black people were not U.S. citizens.

But the companion bill, introduced by Maryland Democratic Sens. Ben Cardin and Chris Van Hollen, has yet to see action in the Democratically controlled Senate.