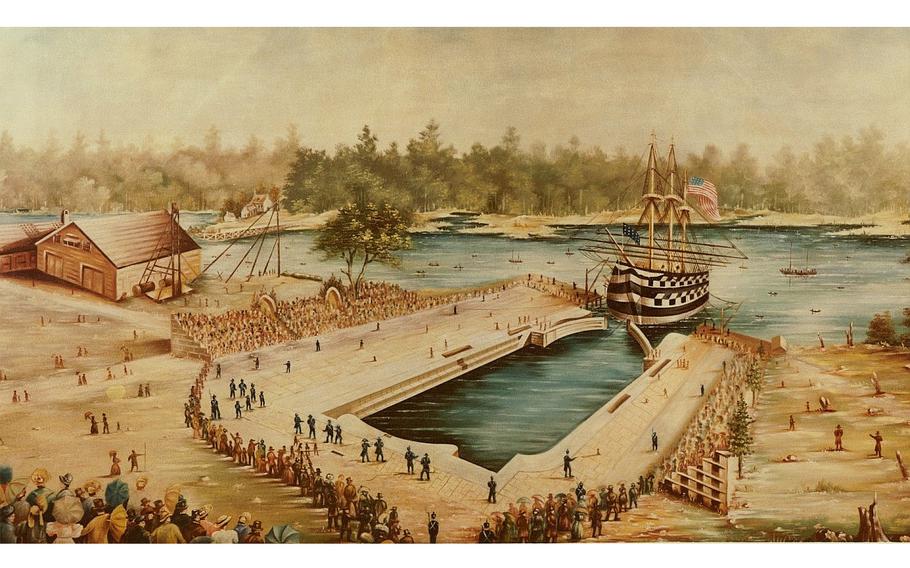 A painting of the USS Delaware at the Norfolk Naval Shipyard in Portsmouth, Va. (Courtesy of Naval Historical Center)

PORTSMOUTH, Va. (Tribune News Service) — Dry Dock No. 1 at the Norfolk Naval Shipyard in Portsmouth has hosted plenty of history over the past two centuries.

It was where the Confederates turned the USS Merrimack into the CSS Virginia during the Civil War. It’s now the oldest operational dry dock in the United States.

As it turns out, it was the site of controversy before it was even completed.

The use of enslaved workers who were paid a small sum to build it in the early 19th century created labor tensions, a mix of classism, racism and evolving social conventions that clashed in what’s known as the Norfolk Dry Dock Affair.

An upcoming Black History Month presentation in Portsmouth, “Urban Slavery and the Construction of Drydock #1 at the Gosport Shipyard,” delves into that history.

“We usually talk about the engineering history of the dock,” said Diane Cripps, curator of history for the Portsmouth history museums. But it also brings up “something that people don’t think about when they think about slavery: slaves in a city setting. It brings that human element that we haven’t addressed before.”

In the 1820s, U.S. officials recognized they needed a better way to service the naval fleet.

With no dry docks at the time, ships had to be heaved onto their sides, while floating or in mud, to get at their hulls, according to the American Society of Civil Engineers.

Congress appropriated funds for new dry docks at Boston Harbor and then- Norfolk County — narrow basins that could be flooded and drained during shipbuilding and maintenance.

Construction began in 1827 but didn’t pick up speed for a couple of years — by which point President Andrew Jackson had been elected, riding a wave of populist sentiment.

Suddenly, Baldwin was under immense pressure as a Northerner appointed by a “Northern elite” president, Upham-Bornstein said.

“In order to defend his oversight of the Norfolk project, which was taking him a little longer, he had to keep his costs at a minimum.”

Baldwin hired a local man, Henry Singleton, to help negotiate with slaveowners for laborers. A system of slave hiring had emerged in the region not long before.

Agricultural operations were collapsing because of overworking of the soil and changing technology that reduced the number of workers.

But slaveowners saw they could still make money off the enslaved and started leasing them. Baldwin hired them to do much of the essential work building the dry dock.

The construction was arduous and labor-intensive, Upham-Bornstein wrote in the journal article. It involved driving piles into the river bottom, building a dam to hold back tides and constructing the interior chamber, which was 86 feet wide, 30 feet deep and 288 feet long.

Most work consisted of cutting and hewing granite blocks, which Baldwin had shipped from a quarry in the Northeast.

Baldwin employed 33 Black hammerers and 11 white ones. The white workers were paid between $1.50 and $2 per day. Enslaved black workers were paid 72 cents — most of which went to their masters. They were allowed to keep 10 cents, according to Upham-Bornstein’s research.

“People did not look at the human factor of slaves,” she said. “You can see that it’s more sterile in their analysis at the time. Both the slaveowners and politicians are looking at this as a business decision rather than a race and class decision.”

On the Massachusetts project, Baldwin employed convict workers to the same end. He then hired Samuel Johnson, the former overseer of Massachusetts prisons’ stone-cutting department, to train slaves in Virginia.

The practice of hiring and paying the slaves soon stirred controversy — but not for racial reasons alone.

The cheaper source of labor thrust skilled slaves into competition with white artisans who were looking for work but paid more, Upham-Bornstein said.

“The willingness of hired slaves (and free blacks) to work longer hours for less money, `combined with a temperament regarded by employers as more obedient and docile than whites,’ further undermined the economic position of white mechanics,” she wrote.

Their first attempt to do something about the situation came in January 1830.

In a petition to the Secretary of the Navy, 10 white stonemasons who were residents of Portsmouth claimed they had “family responsibilities” and needed work they’d been denied on the Gosport Shipyard dry dock project. They requested an investigation into the hiring of slaves.

“We view it as a most grievous imposition, detrimental to the labouring interest of the community, and subversive to every principle of equality,” they wrote.

Baldwin defended the practice, saying “we can dismiss them whenever we are dissatisfied with them, and they may be taken away whenever their masters please.”

He argued the Black workers’ labor was more cost-effective and that slaves did not complain as much as the white workers.

“The fact is, that the thirty negroes who are hammering stones have not lost a single hour from fatigue or lame hands or wrists,” he said. “This ‘man of family,’ this white man . . . has given out on the second day. Which is the most competent?”

Adding to the tensions was Baldwin’s clear contempt for Southerners over his Bostonian counterparts, Upham-Bornstein said.

The white workers’ petition was not indulged, and in April they submitted another, arguing that the “character” of slave labor was hostile to them.

Hoping to appeal to President Jackson’s “racially selective egalitarianism,” Upham-Bornstein said, the petitioners wrote slave labor had excluded them from employment “and made places for others, not our equals, because they are not white men, or free men.”

The only event that did halt slave labor at the shipyard — albeit briefly — was the Nat Turner rebellion in August 1831.

A few dozen miles to the west of Portsmouth in Southampton County, Turner led enslaved men on a rebellion that killed more than 50 people.

The episode sent shockwaves through slaveowners who feared they would be killed in their sleep, Upham-Bornstein said. Slave hiring slowed for a while, but eventually picked back up.

There’s little known about the slaves who played such a critical role in the dry dock affair. They don’t get a say in the historical record.

But some insight can be found in the autobiography of George Teamoh, who was born enslaved in Hampton Roads in 1818.

He recalls being in the service of a man working on the dry dock as a machinist. Teamoh also said that he worked for a time as a laborer during the dock’s construction.

“Vast numbers of slaves . . . have been worked, lashed and bruised by the United States government (at the Navy Yard),” he wrote. “Justice and time points with significant finger to the first stratum of imbedded rock there deposited (at the dry dock) by the unrewarded labor of the slave. I have wrought upon these ‘works’ in common with my fellow bondsmen, receiving the same scanty ration as dealt out by the commissary.”

Learning about a construction controversy two centuries ago may seem like old news, Upham-Bornstein said, but it can help understand the same tensions that persist in various forms.

“You can understand the cultural climates that informed or shaped certain things,” she said. “It’s a response to what is perceived as a threat to the hegemony of the white race.”

Cripps said the city’s Naval Shipyard Museum has long had an exhibit on the dry dock’s construction as an engineering behemoth. Until now, though, officials haven’t really explored the role of slaves in that.

“It’s a government project that had to meet budgets and deadlines — there’s so much familiar about it to people who may work in that field today,” Cripps said. “But there’s so much more historical depth in thinking about” how it happened.

Upham-Bornstein said she hopes to research the topic more and spark further discussion.

“It’s one of those awkward things to talk about,” she said. “I think we haven’t really resolved the tensions.”