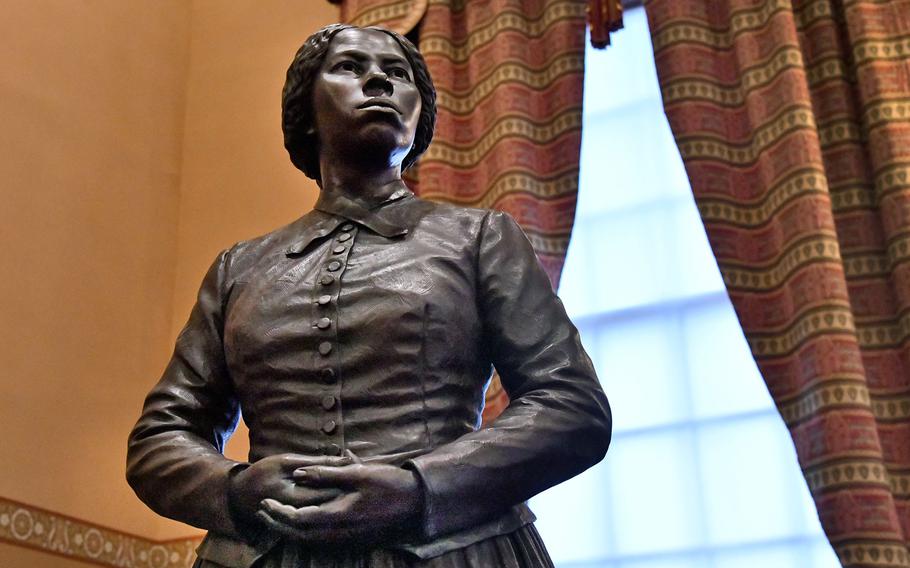 Statues of Harriet Tubman, pictured, and Frederick Douglass, created by StudioEIS, have been installed in the Old House of Delegates Chamber at the Maryland State House. The statues, which commemorate the abolition of slavery in Maryland on Nov. 1, 1864, were created as a joint project of the Department of General Services and the Maryland State Archives, under the auspices of the State House Trust. (Amy Davis, Baltimore Sun/TNS)

(Tribune News Service) — Before she became the historic hero known as Harriet Tubman, Araminta Ross was born in early 1822 near Cambridge on Maryland’s Eastern Shore. Some 200 years later, she is celebrated as a global icon of freedom.

Amid harsh treatment, Tubman tried more than once to flee Dorchester County, the rural farming community where she, her parents — Harriet “Rit” Greene Ross and Ben Ross, Sr. —and eight siblings were enslaved.

Hiding by day and traveling by night, she journeyed solo through Maryland, then Delaware, before finally reaching Pennsylvania.

“When I found I had crossed that line, I looked at my hands to see if I was the same person,” Tubman said later. “There was such a glory over everything.”

To mark the bicentennial of her birth, events are scheduled across the country, including Maryland, where Gov. Larry Hogan is expected to announce in March plans to commemorate the legendary abolitionist.

Tubman’s distinction as the first Black woman in the U.S. military is now being recognized. A scout, spy, and nurse for the Union Army during the Civil War, she helped plan and lead a major military operation: the Combahee River raid in 1863 with the all-Black 2nd South Carolina Volunteer Infantry Regiment. As boats moved up the waterway, destroying bridges and Confederate supply lines, the effort would free more than 700 men, women and children from nearby rice plantations.

Moreover, Tubman was a suffragist who championed women’s right to vote. She raised money for the Freedmen’s Bureau, a federal agency founded to help the newly freed post Emancipation. An early entrepreneur, she even ran an “eating house” in Beaufort, S.C., and a “wash house” where she taught newly freed women how to wash, cook and sew.

“Aunt Harriet is multidimensional as a person,” said Ernestine ‘Tina’ Wyatt, Tubman’s great-great-great grandniece. “Everything she did was about being free.” Wyatt, who lives in Washington, D.C., can trace her matriarchal lineage to Tubman. “My great-great-grandmother, Ann Marie Stewart, was the daughter of Soph, one of her sisters who was sold away during slavery,” she said.

Tubman spent her later years in Auburn, N.Y., where she owned property that Wyatt’s ancestors visited.

“My grandmother remembered her,” she said. “As a little girl, she went along when Aunt Harriet would do laundry and deliver it in a wagon.”

Tubman died on March 10, 1913, and was buried with military honors in Auburn. In February 2021, she was inducted into the U.S. Army Military Intelligence Corps Hall of Fame.

In early January, Wyatt took part in the National Bell Festival held at the Military Women’s Memorial on the grounds of Arlington National Cemetery. A historic bell was rung by Wyatt and veteran servicewomen 200 times to symbolically mark Tubman’s birth.

“Aunt Harriet changed the world,” Wyatt said, adding that Tubman, dubbed the “Moses” of her people, credited deep faith for a lifetime of achievements. “She would say it was God who showed her. He used her as a vessel for humanity.”

Today, as the country grapples with thorny questions about race, Tubman’s legacy feels even more timely and relevant. Numerous organizations, attractions and agencies in Maryland and the Mid-Atlantic are planning commemorative events tied to Tubman for Black History Month and her birthday. 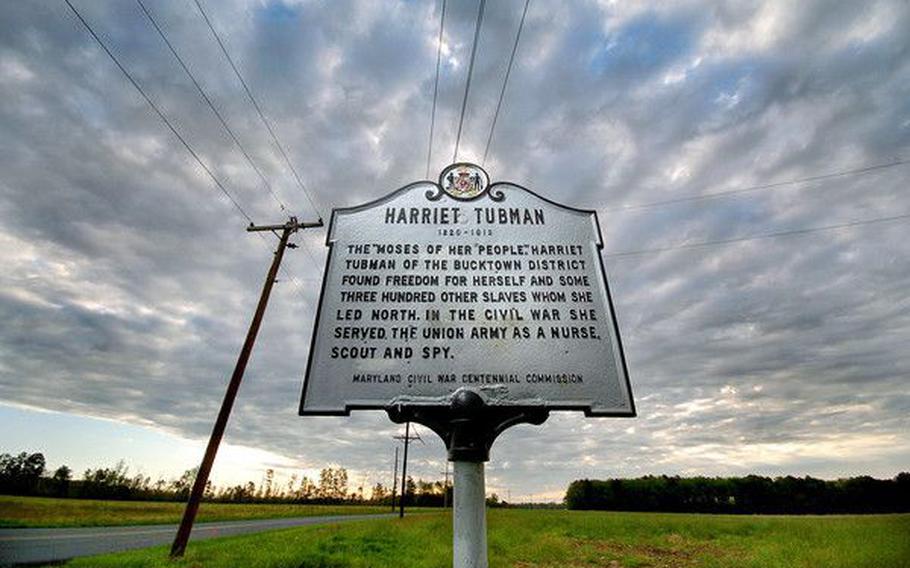 A birthplace marker for Harriet Tubman in Cambridge is just one of the sites on the Eastern Shore that is dedicated to the abolitionist, who was born and raised in Dorchester County. (Karl Merton Ferron, Baltimore Sun/TNS)

Baltimore: Learn about Tubman at the Reginald F. Lewis Museum of African-American History & Culture or the National Great Blacks in Wax Museum. At Goya Contemporary Gallery, select artworks can be viewed from artist Joyce Scott’s “Harriet Tubman and Other Truths” exhibition, which originally premiered in 2017. Screening of “Harriet” on Feb. 20 at The B&O Railroad Museum. Recently designated a National Underground Railroad Network to Freedom site by the National Park Service, the B&O will host three films on the topics of slavery, the Underground Railroad, and freedom.

Annapolis: The Maryland State House boasts life-size bronze statues of Tubman and fellow Maryland-born abolitionist Frederick Douglass in the Old House Chamber. The gallery has excerpts of an 1868 letter in which Douglass praises Tubman, a friend.

There are two national Harriet Tubman historical parks: one in New York and one on the Eastern Shore. The Harriet Tubman Underground Railroad National Historical Park preserves the natural landscapes associated with her Maryland story. The Harriet Tubman Byway is a self-guided driving tour, complete with trails, marshy waterways and locations used by Tubman and fellow freedom seekers. More than 40 designated stops wind through Maryland (Dorchester and Caroline counties), then Delaware, before concluding in Philadelphia.

Blackwater National Wildlife Refuge: During Tubman’s youth, she worked on farms within the boundaries of what is now the wildlife refuge. In Spring 2020, archaeologist Dr. Julie Schablitsky and a team from Maryland’s Department of Transportation discovered the former homesite of Tubman’s father, Ben Ross, within a portion of the refuge. Artifacts uncovered include a rare coin, button and even remnants of a pipe.

Cambridge: The mural “Take My Hand” by artist Michael Rosato graces the exterior wall of the Harriet Tubman Museum & Educational Center in Cambridge. Near U.S. Route 50, the Harriet Tubman Memorial Garden features murals painted by Charles Ross, a great-great-great nephew of Tubman. A 12-foot bronze Tubman sculpture named “The Beacon of Hope” and created by artist Wesley Wofford of North Carolina is slated for installation in September at the Dorchester County Courthouse, once the site of slave auctions.

For more information on Harriet Tubman commemorations throughout the year, go to the Maryland Department of Tourism at visitmaryland.org. 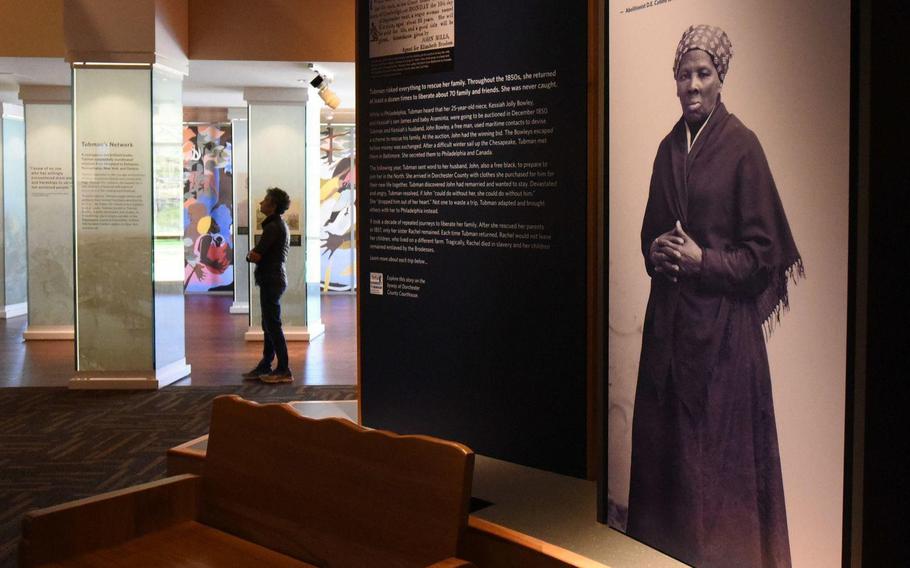 Tubman’s footprint is visible at the Smithsonian’s National Museum of African American History and Culture, where an album owned by Quaker schoolteacher Emily Howland displays a previously unknown youthful photo. One can also view Tubman’s personal hymnal; a silk lace and linen shawl gifted by Queen Victoria; an apron and other items from Tubman’s household such as silverware.

The Harriet Tubman National Historical Park New York in Auburn, N.Y., includes her residence (purchased in 1859); the church she helped to build, Thompson Memorial AME Zion; the Tubman Home For the Aged; and The Harriet Tubman Visitor Center. The National Park Service notes the park is a work in progress and that some of the buildings are in disrepair and cannot be accessed by visitors. Tubman’s residence can be viewed from the exterior only while guided tours of the Home for the Aged are available.