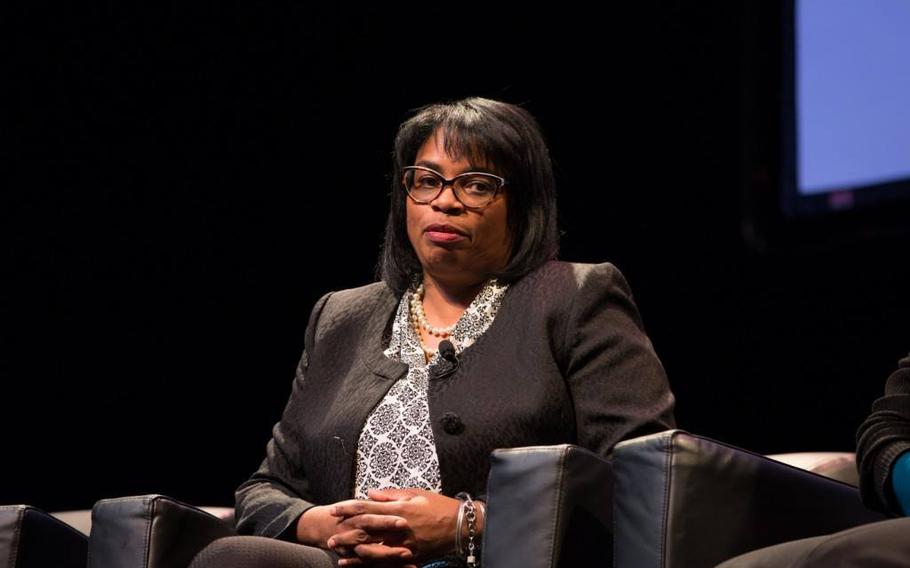 Rhonda Brace will be in Philadelphia at the Museum of the American Revolution the evening of Feb. 17 to talk about her grandfather, Jeffrey Brace — who fought in Washington’s Continental Army and was then freed by Benjamin Stiles — with scholar Kari J. Winter. (Facebook)

It's the kind of visit that makes your stomach sink if you think about it too much. But Rhonda went, with her mother and father, to meet Stiles family descendants, still living in the house built in 1741 in Woodbury, Conn.

The house stands next to the even older red barn, built toward the end of the 17th century — one of the oldest in the state. It was there that Jeffrey Brace labored as an enslaved worker, bought and owned by the widow Mary Stiles at the time of the Revolutionary War.

Rhonda Brace hoped that Mary Stiles’ descendants might have some documents or artifacts casting a little light on Jeffrey Brace, who as a free man in 1810 wrote and published a memoir, “The Blind African Slave.”

"They'd read the book," Rhonda recalled. And although they had nothing in the way of documentation, the Stiles family offered something far more visceral, she said.

"They actually brought us down, my dad and I went — my mother wouldn't go — we went down to what they believe were the slave quarters in the house," Rhonda Brace said. "That was, very, yeah ..." Her voice trailed away. "But it was something just to be on the property."

Rhonda Brace will be in Philadelphia at the Museum of the American Revolution the evening of Feb. 17 to talk about Jeffrey Brace — who fought in Washington's Continental Army and was then freed by Benjamin Stiles, the widow's son — with scholar Kari J. Winter.

It was Winter who revivified the nearly lost Jeffrey Brace narrative, “The Blind African Slave: or, Memoirs of Boyrereau Brinch, Nicknamed Jeffrey Brace.” It was republished it in 2004 — nearly two centuries after it was issued by an obscure Vermont printer before vanishing almost entirely.

Winter will be delivering a talk, "Reclaiming Freedom: Race, Revolution, and the American Story of Jeffrey Brace," followed by a conversation with Rhonda Brace and R. Scott Stephenson, museum CEO and president.

The museum has also just acquired a cache of nearly 200 documents related to participation in the Revolutionary War by Black soldiers, including Jeffrey Brace.

"The exciting thing about this is that it is representing Jeffrey Brace," said Winter, speaking of pension and payment records now in the museum's collection. "It's the first thing we have that we know was touched by his own hand."

Winter, professor of American studies at the University at Buffalo, said the obliteration of Jeffrey Brace's story was nearly complete when she began her research back in the 1990s. She encountered Brace descendants living in Vermont and Connecticut who "knew nothing about it."

But the story is unusual. For one thing, Jeffrey Brace was born in Africa and was not seized by enslavers until he was about 16. As a result, The Blind African Slave contains first-person descriptions of Brace's homeland, probably the Niger River valley in present-day Mali.

He was born about 1742 and captured "by the English," he notes, around 1758. The English shipped him to Barbados where Brace was treated brutally and purchased by an English seaman, Captain Isaac Mills. Brace received multiple wounds while fighting in the Seven Years War, and after a string of sales from one violent owner to another, he was purchased by "widow Stiles" around 1768.

"This was a glorious era in my life, as widow Stiles was one of the finest women in the world; she possessed every christian virtue," Brace writes. "This same woman was the mother of Benjamin Stiles, Esq. whose illustrious character is rewarded in the heart of every person living who knew him."

The widow taught Brace to read, and following her death in 1773, her son encouraged Brace to enter the army, where his service was honored with a badge of merit. He was discharged in 1783, and subsequently freed by Benjamin Stiles.

"Thus was I, a slave for five years fighting for liberty," Brace notes in his narrative. Upon leaving the army, he made his way to Vermont, bought land, farmed, married, and died in 1827.

This story, Winter notes in her introduction, "offers the opportunity to view the slave trade, West Indian culture, the Seven Years War, New England slavery, the Revolutionary War, and early Vermont culture from the perspective of an extraordinarily perceptive African victim and participant."

The cache of papers just acquired by the museum contains some Continental Army records related to Jeffrey Brace, although that name does not appear on any of the documents.

"A couple of documents are signed by a man who used as a nickname, 'Pomp London' ... of Woodbury," said Stephenson, the museum president. "The beauty of that is that it was like a Rosetta Stone for us."

Museum historians recognized "Pomp London" as one of the many names and nicknames used by Jeffrey Brace.

"That's the magic of a museum," said Stephenson. "Being able to connect a document that was literally in his hands — it's literally something that he put his mark on."

The documents are "a tangible real thing that we can put out on display in the museum — that is a very powerful hook for visitors, particularly younger visitors," said Stephenson. "And it sets a research path."

For Rhonda Brace, the research path is clear. It's family.

"We've always had an interest in trying to trace our history, but it wasn't until we were introduced to Kari's book that we were able to trace it back that far."

For Stephenson, being able to read “The Blind African Slave” is "a gift."

"I don't think I'm exaggerating to say it came close to being lost to humanity by there being so few copies that survived," Stephenson said.

Turning to Winter he said, "I was very moved by you saying that this may be the first object that we know of that was actually in his hands. To me that is the magic of what we do and it's very powerful, very powerful."

Kari Winter will deliver her talk, "Reclaiming Freedom: Race, Revolution, and the American Story of Jeffrey Brace," at the museum on Feb. 17 at 6:30 p.m. The event will be presented live at the museum and also virtually via Zoom. For tickets and other details visit the museum website at https://www.amrevmuseum.org/.