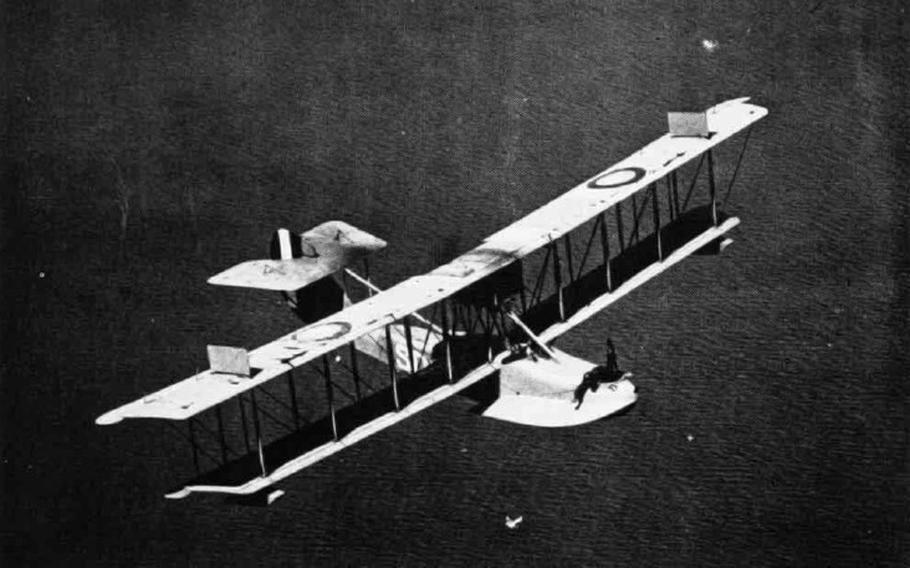 The Lady Baltimore II, a World War I U.S. Navy surplus Curtiss Aircraft HS-2L flying boat, landed in town and opened for business at the end of Marine Street.

"They charged for tours," said Tom Rahner, a retired Flagler College professor who has researched the plane excessively. "It was about $10 for a 1/2 hour. That was a lot of money back then, but people who stayed in those hotels had a lot of money."

Rahner said the plane arrived in 1922, just 19 years after the first Wright Brothers flight, so "it was a real novelty."

The wood and canvas plane would take off from the water with a pilot, co-pilot and up to four passengers sitting in an open cockpit for a tour around the city.

Rahner, 86, has a personal connection to the plane. His father, F. Victor Rahner, was a photographer in town and flew on the Lady twice.

"He was commissioned to take a photograph of the Castillo de San Marcos from the Lady Baltimore II and he had something of a misadventure," Rahner said. "He went up in the plane seated in the front cockpit and the pilots were in the rear cockpit. Wanting to get the best photograph possible, he used the largest format camera he had — an 8-by-10 view camera.

"He had never been up in a plane before and they got over the fort, circling before he stood up with the camera," he continued. "Well, they were doing over 70 miles an hour, and it blew the camera back in his face and knocked him out. The pilot thought he was dead, my dad told me.

"They circled and landed on Matanzas Bay and signaled to people who came out, got him and took him home at 28 Cuna St. They got him patched up, and after he recovered some, he went back up with a much smaller camera and got that photograph.

"Dad said he always wanted to fly. He tried to enlist in World War I as an aerial combat photographer, but he wrestled in his youth and got a double hernia, and when he went for his physical, the doctors said, 'Son, you're unfit for military services. We can't take you,' and he was crestfallen. Then they said, 'Go home to your mother — she will be thrilled,' because the average life span of an aerial combat photographer was six hours."

The photo his father took for the postcard 100 years ago is one of the earliest aerial images of the Castillo. Rahner said it would be more than 25 years before his father took another plane flight.

But giving tours wasn't the only way the Lady Baltimore stayed in business. Rahner's father shared first-hand stories of another income stream: smuggling alcohol into St. Augustine — or rumrunning — during prohibition.

Prohibition did not eliminate people's desire to drink, especially in the city's upscale hotels. After the plane finished its daytime tourist flights, the pilots would remove the passenger seats to make room for the booze.

"They would take off after dark without the passenger seats, to avoid the revenuers," Rahner said. "They would fly out past the 3-mile U.S. government jurisdiction and land off the coast next to a ship from Cuba loaded with liquor. Without the seats, the plane could take 25 cases of fifths, or 15 cases of quarts. They'd load him up and he'd fly it back, land on the water, and offload to vehicles to be distributed all over.

"That wasn't the only operation," Rahner continued. "Smaller boats would come into South Beach or North Beach and offload to cars that were specially fitted with heavier springs so they wouldn't hunker down with all that load. My dad said sometimes, you would go to the beach in the morning and the beach would be littered with packing crates and excelsior (a type of wood packing material). He said you knew that was where they offloaded the stuff for delivery."

Rahner said this father told him that everyone knew what was going on with the plane.

"This was a tourist town," Rahner said. "The Volstead Act was an unenforceable law, and it was generally held up to ridicule. People violated it, all day, every day. Rich people in hotels and regular people in the streets. There are no secrets in a small town; everyone knew, and no one cared, according to Dad."

After the winter season, the Lady Baltimore moved on.

"The plane was here for only a few months," Rahner said. "According to my research, they went back to Maryland for the summer and came back in the winter farther south the next season."

There is no record of the plane today.

"These planes were made of wood and canvas," said Rahner, "and sat it the water all day. They did not last long."

F. Victor Rahner continued to work as an influential photographer in the city for decades, running a photography studio across from the fort from the 1940s to the 1970s. He died in 1984.

Tom Rahner was one of the first faculty members of Flagler College when it opened in 1968 and founded the school's theater department. When he retired, he started building models as a hobby, including several that have been on exhibit at the Lightner Museum.

One of his models on display in his home in St. Augustine Beach is a 1:24 scale model of the Lady Baltimore.

"We went to the Canadian National Aviation Museum in Montreal to view and take photos of the last HS-2L," he said. "It is part my history and the town's, too."