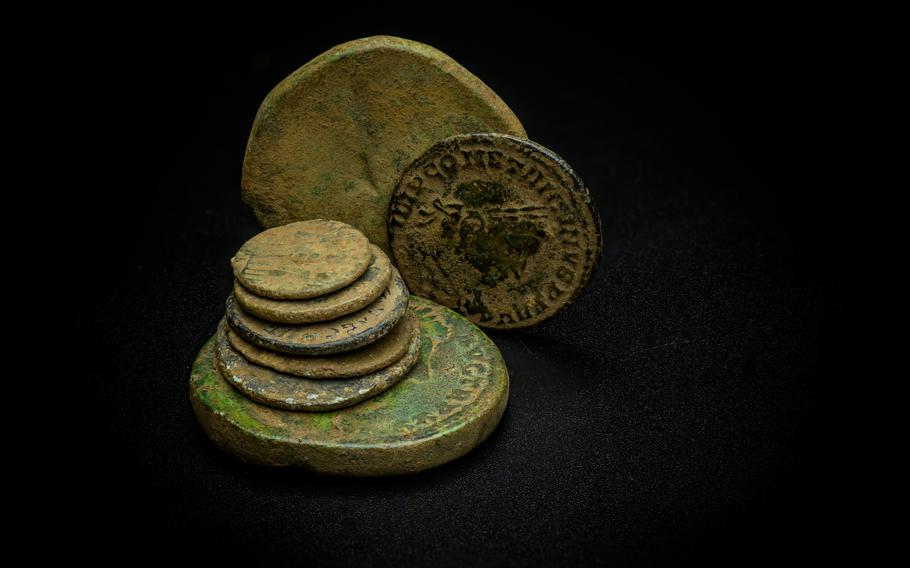 Roman coins silver and copper alloy are seen from the excavation site near South Northamptonshire, England. (Courtesy of HS2 Ltd.)

LONDON — A vast ancient Roman trading settlement has been unearthed in England, during routine digging work for a new high-speed train track.

The rare finds announced Tuesday include more than 300 coins, jewelry and a giant Roman road, with the area being described as "a significant archaeological site" by HS2 Ltd, the publicly funded government company developing HS2, a national high-speed railway project.

For the past 12 months, some 80 archaeologists from MOLA Headland Infrastructure, a consortium of British archaeological companies working on the rail project, have been excavating the Iron Age village that developed into a wealthy Roman trading town. 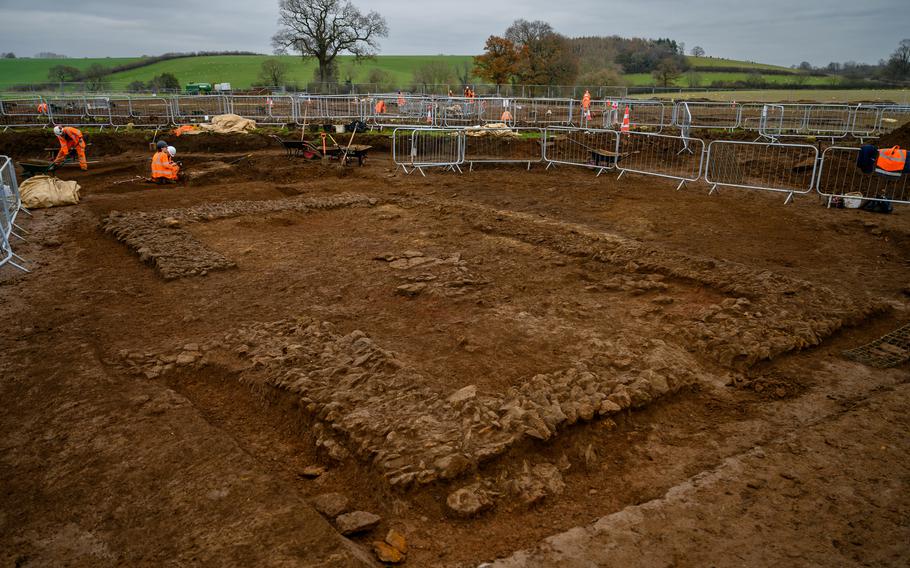 The excavation site of Roman ruins is seen near South Northamptonshire, England. (Courtesy of HS2 Ltd.) 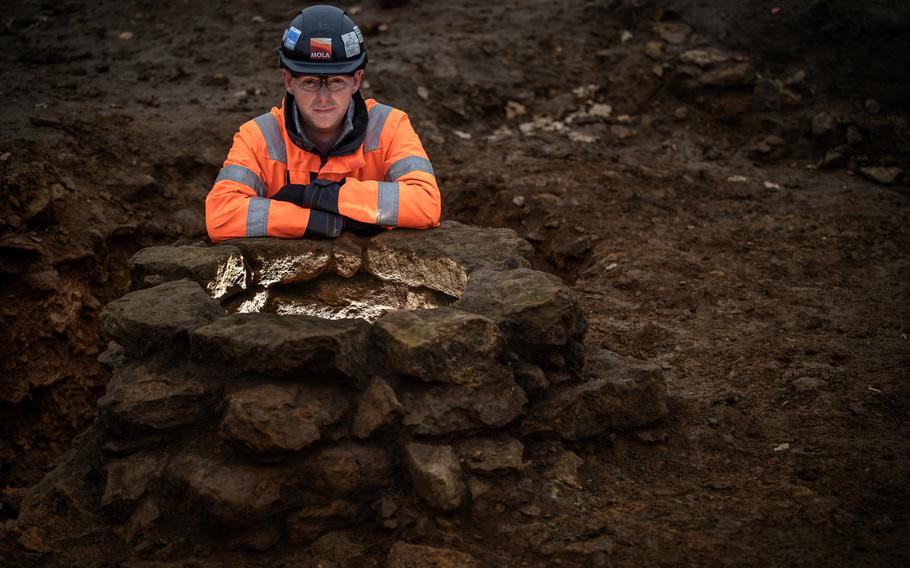 A site manager is seen by one of several wells, which archaeologists called “beautifully preserved,” near South Northamptonshire, England. (Courtesy of HS2 Ltd.) 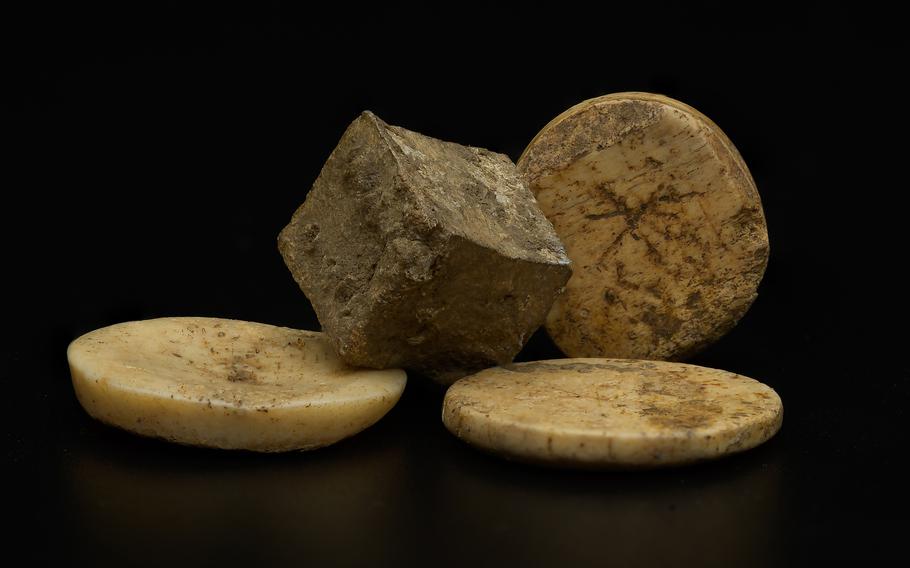 The site, which was uncovered near a small village in South Northamptonshire, northwest of London, has been dubbed "Blackgrounds" after the deep black-colored soil found there.

"This is certainly one of the most impressive sites MOLA Headland Infrastructure has discovered," James West, MOLA site manager said in a statement. "Uncovering such a well-preserved and large Roman road, as well as so many high quality finds has been extraordinary and tells us so much about the people who lived here."

The presence of the Roman settlement had been known about in the area since the 18th century, according to the HS2 team, but the "scale and quality of the discoveries on site have surpassed expectations."

Archaeologists say the original use of the Blackgrounds site may have begun in the Iron Age when it was a village formed of over 30 rudimentary dwellings. Evidence from the recent dig suggests the settlement expanded over time and became more prosperous during the Roman period, with new stone buildings and roads emerging. Experts say inhabitants may have taken on Roman customs, products and building techniques and adapted to new ways of life.

"At its peak during the Roman age, Blackgrounds would have been a bustling and busy area, shown though the evidence of workshops, kilns, and several beautifully preserved wells," the team said, adding that there is evidence of possible breadmaking or foundries for metalwork.

"The site really does have the potential to transform our understanding of the Roman landscape in the region and beyond," West added.

The 33-foot Roman road, "which is exceptional in its size," indicates that the settlement would have been busy with the traffic of carts loading and unloading goods, the experts say. The wealth of the settlement is likely to have been based on trade, both from the nearby River Cherwell and via the Roman road. The discovery of more than 300 Roman coins is also an indication of a "significant volume of commerce" passing through the area, the team added.

The archaeological gem has been unearthed while work is underway on the HS2 train line project, which eventually aims to connect major English cities such as Birmingham and Leeds with London to become the "backbone of Britain's transport network." The infrastructure project has been championed by successive British governments, but has faced criticism for delays and overspending.

The artifacts are now being cleaned and analyzed by specialists, and the details of the buildings and layout of the settlement will be carefully mapped. Blackgrounds is one of over 100 archaeological sites that HS2 has examined since 2018 between London and Birmingham, and it provides a further insight into Britain's rich Roman history.

The finds have not stopped the massive train project in its tracks yet, according to HS2, because advance planning work and surveys help to ensure the plotted routes avoid disrupting the historic sites.

"As we near the end of our archaeological field work … we have made some unprecedented discoveries, which we will continue to share with communities," Mike Court, lead archaeologist for HS2 Ltd., said in a statement.